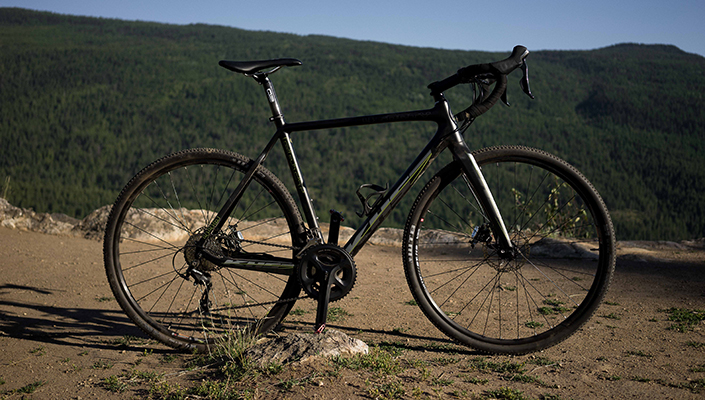 The KHS Grit 440 is a burly cross bike with an appetite for gravel
image: Josh Palmer

With the popularity of gravel racing and adventure riding on the rise, many bike companies have made beefed up, slack, and wide tired road bikes permanent parts of their line-ups. The desire to take your road bike off-road has opened a whole new world of riding, racing, and adventuring.

With people taking their existing road bikes into the wilderness, the industry has no clear definition between cyclocross / gravel grinder / adventure touring bikes. There are a few similarities like disc brakes, wide tires, and more relaxed geometry. But what really makes a good gravel bike and what are its limitations?

RELATED: Frame Materials and What to Buy

The KHS Grit 440 is a beefed up CX bike with a sleek carbon frame and aggressive 35c tires. The Grit 440 is listed under "cross/gravel bike" on the KHS website based on its appeal to both generes of riding. Let's take a closer look at this rig and see what it's made of (and made for). 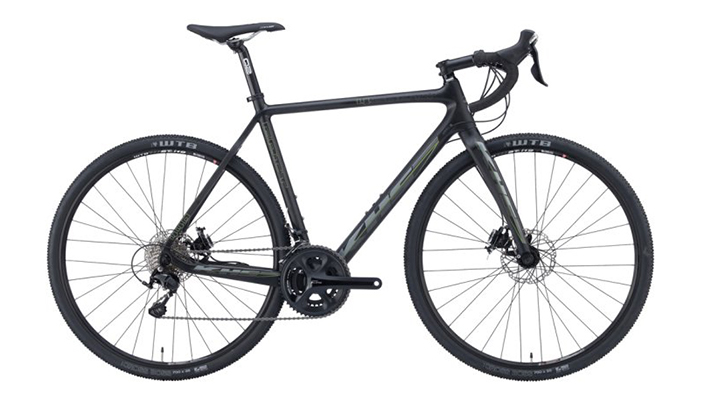 The first thing you notice is the Grit 440 is made of T700 High Modulus Carbon, a mid-grade carbon usually found on more expensive road bikes. The matte carbon frame has a sturdy look, with a full carbon fork that looks ready to take the kind of abuse you deal your DH bike. The lines are relatively clean and the sublimated grey and yellow graphics are nicely muted, yet add to the bike's appeal. The carbon is smooth and quiet on the road, but will quickly let you know if any bolt is even half a turn loose with some loud clunking. 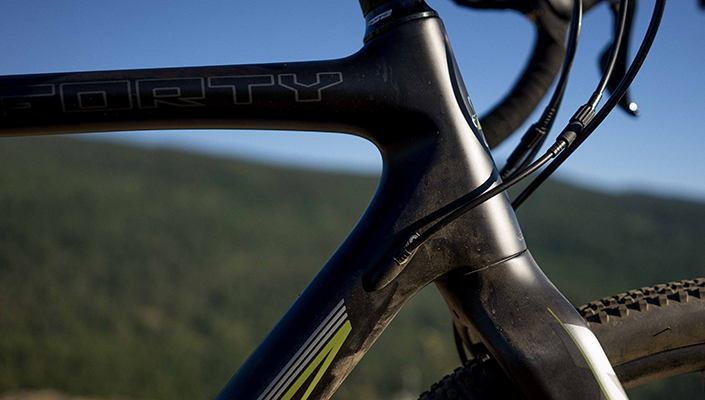 Although the geometry is somewhat relaxed with a head tube angle of 71 degrees for the 55cm, the top tube is relatively flat and the BB height is 285mm, making it a suitable CX sled. A full Shimano 105 grouppo converts leg power to wheel movement with a 50-34t chainring set up and an 11 speed 11-32t cassette. The cockpit is stock alloy KHS with a butted compact bar and 100mm stem. The seat post is KHS Q2 carbon and the saddle is a reasonably comfortable KHS Sport Road seat. 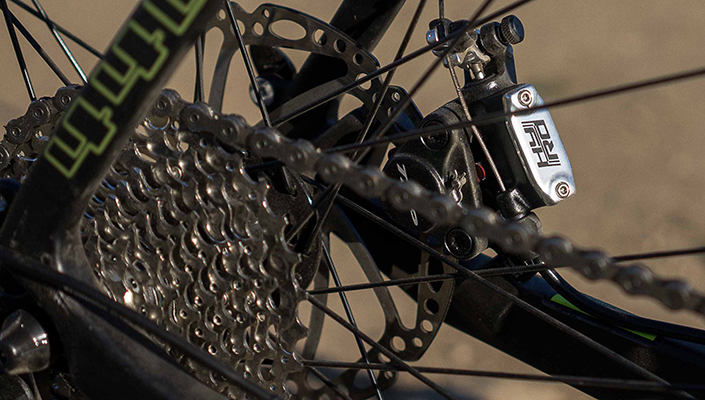 The TRP hydro/mech brakes do a good job stopping the Grit in all conditions
image: Josh Palmer

The brakes are TRP mechanical/hydraulic hybrids with mechanical 105 levers pulling the cables. The Grit also has the secondary Tektro levers on the bars for braking in multiple hand positions. The Grit 440 comes with WTB tubeless ready rims and WTB tubeless ready Cross Boss 35c tires, making good solid contact with whatever surface you're rolling over. 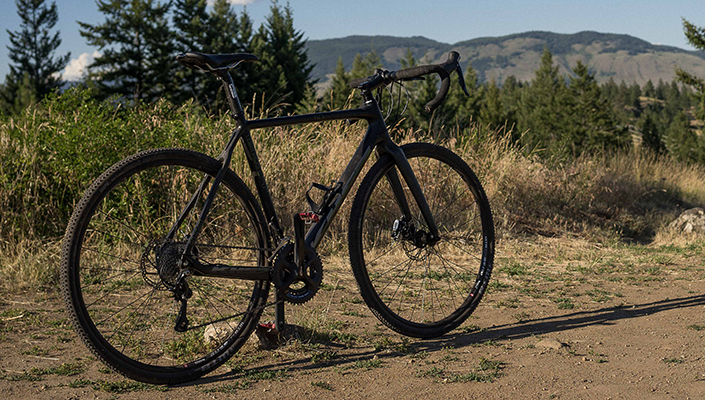 With a sturdy frame and a reliable 105 grouppo the Grit 440 should be worry free
image: Josh Palmer

The KHS Grit 440 is an over built CX bike, something that suits me just fine. The bike sent to me was a 55cm, which was a size too small, but I made do. The smaller frame may have been cramped on a longer ride, but it allowed me to push the bike to its limits when off road. The bike came with the bars fully unwrapped and brakes fully disconnected so the build will be a little more time consuming than average if you take it on yourself rather than let your bike shop handle it. The first thing I noticed while riding the Grit 440 is how smooth and sturdy the T700 High Modulus Carbon is in all riding situations. The frame dampens all road conditions really well. At 215lbs., when I put my legs into a bike on a grunty climb, I can make almost any frame flex. With the Grit 440 I feel wheel flex and that's about it.

The smooth ride of the Grit 440 allows you to confidently reach a good pace on gravel roads or even on trails and pathways. The stability makes long gravel rides more comfortable and enjoyable. The vibration in your hands and butt are kept to a minimum, even on gravel and dirt. Although the secondary Tektro brake levers make it so you have choice in your hand position while braking, I never found them necessary. The hydraulic disc brakes require so little input to work that even if you get a fingertip on the upper part of the normal brake lever you could apply enough pressure to stop yourself. I would have preferred the comfort of having more space on the bars than that of two braking positions. 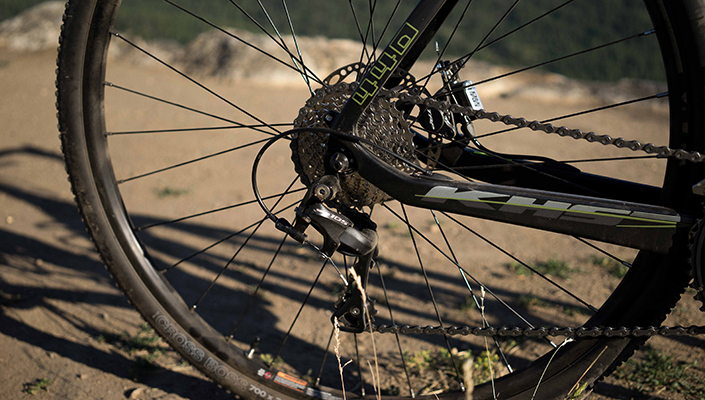 The workhorse Shimano 105 is a solid grouppo for the Grit
image: Josh Palmer

The Shimano 105 kit works well, but we all know that. With 105 being Shimano's workhorse grouppo, KHS are expecting the Grit 440 to retain some practicality and value appeal in the market, which I think they've accomplished. Under my weight and leg strength I did notice a light rubbing noise when I was pedalling under heavy load. After a lengthy noise hunt, all I could turn up was the chance that the rear tire was deflecting enough to lightly rub on the cable clamping bolt of the 105 front derailleur. I adjusted my gears to try and negate this, but I could still flex the wheel enough to lightly graze it.

The TRP hydraulic/mechanical brakes are a nice addition - despite all the disc brake drama going on in the UCI, I cannot see a reason why you wouldn't spec discs on a bike like the Grit 440. With the nature of the bike to explore, you could get caught on a big descent in the pouring rain, or even snow. Disc brakes are a must. 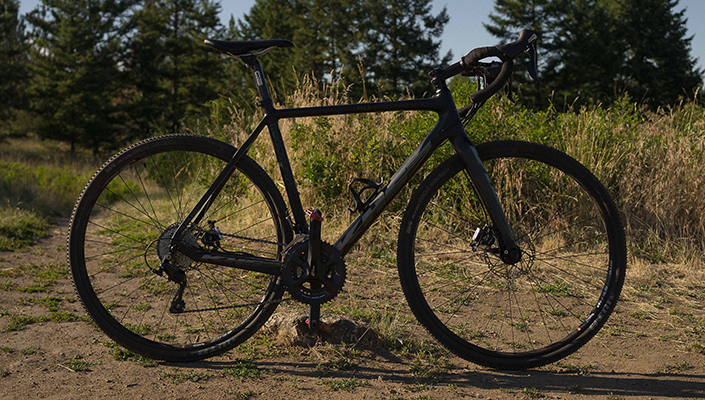 The Grit is a well spec'ed, well built ride. image: Josh Palmer
Find this bike at a local dealer

KHS definitely took a different path with the Grit 440. They opted for a higher end carbon frame for a budget minded consumer. So, did it work? Is the sacrifice in componentry worth the T700 carbon frame? Because they chose Shimano 105 I say yes, the trade-off is worth it. 105 is a grouppo that we all know and love, a trusted workhorse, the working man's grouppo - so, including it in a bike built for value is a good choice. The carbon makes for a smooth gravel ride which is ideal for longer trips off the beaten path. The overbuilt frame should easily handle the roughest conditions with ease making it a reliable choice for those who know they will be going on an abusive ride.

The Grit may be for the rider who loves to get out and explore road, gravel, and light trails, the rider who wants a solid comfortable bike without breaking the bank. The issue with the Grit is that the value minded rider may choose to get a bike with the same build and cheaper carbon frame for a lower price, or they may want a high build on a more basic carbon frame for the same price. With the nature of gravel riders being somewhat utilitarian, the Grit 440 may be a hard sell. But to us bike enthusiasts, the clean lines, T700 carbon frame, and 105 grouppo may be just what we're looking for in our next road adventure bike. 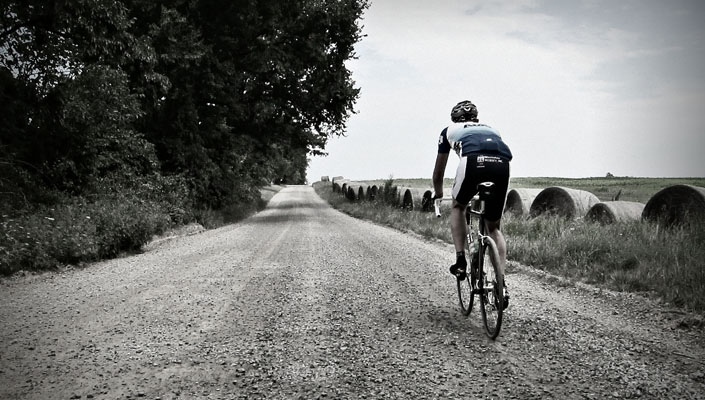 Looking to take your riding off the tarmac and onto the gravel?