After the excitement of another year of bike trade shows in the lead up to 2016, let's look at the industry's latest approach to brakes. There are three types of brakes on a road bike today - dual pivot caliper, direct mount, and disc brakes. 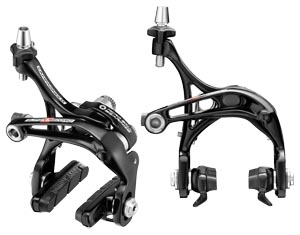 Caliper brakes are the most common types of brakes you will see on an everyday road bike, and thanks to Shimano, the awesomeness of dual pivot calipers is trickling down to the most affordable groupsets. As the name would suggest, and as opposed to single pivot caliper brakes, the two dual pivot brake caliper arms move on separate pivots, which move the pads in different arcs as they approach the rim. Dual pivot calipers offer a mechanical advantage over single caliper brakes, but regardless of single or dual pivot, they are both rim brakes as they both rely on brake pads being pressed against wheel rim braking surfaces to create friction and stopping power. 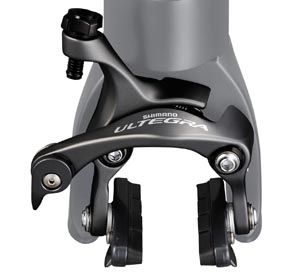 Also known as 'post-mount', these are rim brakes that are similar in action to calipers, but with more bite and bracing. Direct mount brakes can add 'aero' and be more powerful; by mounting the pivots directly to the frame, the assembly can be less pronounced and the brakes can use the structure of the fork and seatstays to brace against. The entire brake sits much closer to the frame and the whole setup is significantly stiffer. That improves both power and modulation by reducing flex from the system.

In the case of the 2016 Fuji Transonic, both the front and rear brakes are direct-mount, which removes the excess material of a carrier plate used by calipers - allowing for better frame integration and improved aerodynamics; the Transonic's fork and seatstays are contoured to match the shape of the brakes, further optimizing aerodynamics. 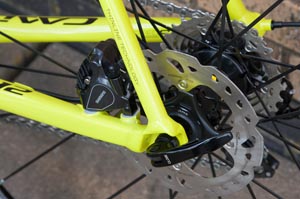 Getting less controversial from a year ago, and with 8 UCI World Teams completing their trial of disc brakes over the next 12 events, discs are already here. Brian Cookson, UCI President, says "disc brakes will be officially introduced to the UCI WorldTour in 2017. The aim is to introduce disc brakes to all levels of road cycling." It's probably a good idea to get your head around them now.

Which road brakes should you get?

Now, I was asked to round off this article by giving my personal opinion as to which is the best. I realize that this may alienate me from certain riding circles or even be a catalyst for a barrage of Facebook comments. BUT… for me, it's...

Step 1: Tell us which one you like by taking our poll.

RELATED ARTICLE:
Looking for a road bike upgrade? 5 reasons why disc brakes should be on the list

Despite what the hardcore, die hard rim brake fans might say, this is a trend that is definitely on its way and being pushed by the industry. Predictions are that in a few years, disc brakes will be pretty much standard on roadies... READ MORE

Once you get the "less is more" monkey on your back, it's very hard to shift him. Yes, a lighter bike will help you go faster and ride longer under MOST circumstances, however, weight saving is conditional on a lot of other factors... and since we can't meet each and every one of you individually we are going to give you what we think is the best "bang for buck"... READ MORE