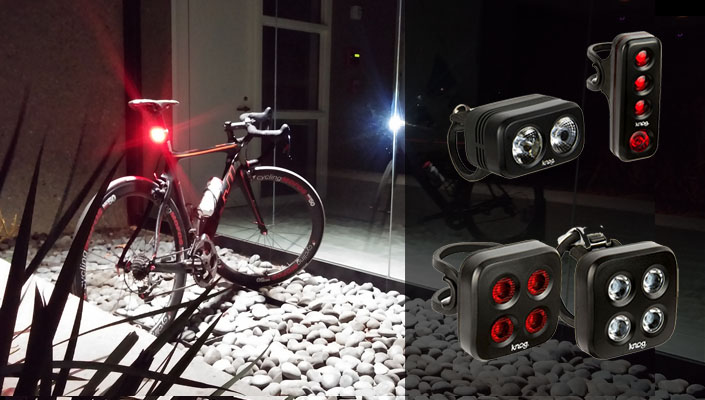 With an eye for aesthetics, Knog quickly rose to the forefront of bicycle light manufacturers
image: Anthony D. Morrow | BikeRoar

Let's face it, you need bike lights for safety and visibility, and every few years you need to upgrade your lights just like you do your mobile phone. You start to crave a light that is brighter, easier to mount, and has a quicker charge time and a longer burn time than your old set.

Over a three-month period, we tested out two front/rear light combos from Knog, an Australian company with award winning designs. The bicycle lights tested are the Knog Blinder Road twin pack and the Blinder MOB The Face twin pack. 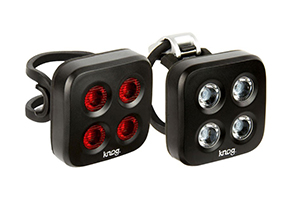 You either need lights that help you see or lights that help cars and other cyclists or pedestrians see you. The lights we tested are geared towards road cycling to ensure you are seen by others, but also to light up the path in front of you. Knog lists these lights as visible from distances over 1000m. They are not designed or suitable for off-road night riding - we tried. 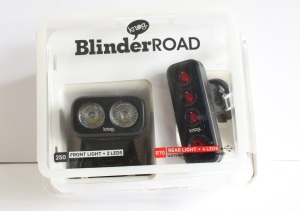 The Blinder Road set arrived in a neat little package with all the specs on the box. It's great to see a company using biodegradable packaging, recyclable plastic and vegetable/soy based inks. The Knog website states that the "packaging is interrogated before it goes to production not only to make sure it will protect your product like nuts in chamois padded Lycra bike shorts, but also to make sure it is as environmentally friendly as possible."

The basic instructions are provided in the box with all the charging cables and mounts. The lights feel really sturdy and strong. 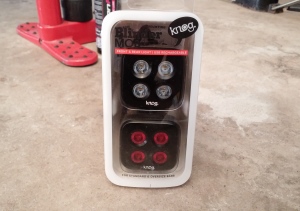 The lights are attractive and sleek. Good looks aren't a priority for me in lights, but it doesn't hurt that these are nice looking. More importantly, they feel nice, which might sound odd, but is noticeable when handling them to attach to the bike or removing them to re-charge. 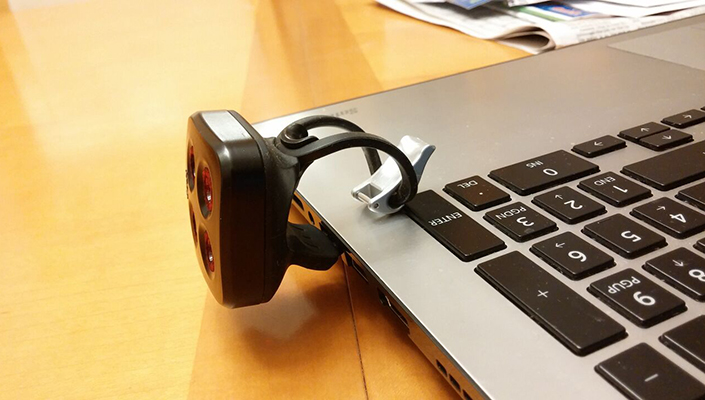 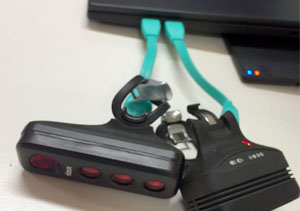 It took me a while to figure out how to unclip the set to get to the USB charger part as the instructions weren't that clear. I wasn't sure if the Knog USB was in the adapter the right way around or all the way in. As it looked like it wasn't clicked all the way in... Anyway, they survived, even with my rough treatment and I soon figured out the correct way to charge them.

I use the lights on my commute to and from work, which is about 1.5 hours total. I manage to get about 3 days of commuting out of them before they need a charge. But, I often have it in high beam mode, which saps the battery life. The front light can give a 5.5 hour run time (in eco flash mode). 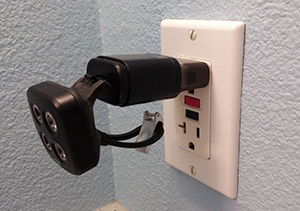 Plug the light right into a USB port - in this case one on a wall charger
image: Anthony D. Morrow | BikeRoar

I rode with the lights right out of the box as they were already charged and I was excited to give them a go. Charging is via their integrated USB plugs - the male end of a standard USB interface. I was afraid those appendages would be fragile and break when mounting and un-mounting the lights, but they've proven durable. I've charged them using both the USB ports on my laptop and the USB plug of my mobile phone with the cable removed. It was probably tempting for Knog to use a micro USB female port, like on a mobile phone, for these lights, but I'm guessing they opted for the integrated USB plugs since USB ports are more prevalent than cables. Still, it must've been a close call.

In any case, plug the lights in and they show a red charge LED light that turns green when fully charged. The lithium-ion polymer batteries get fully juiced in 4-5 hours, then are ready for 2.5 to 62 hours of use. And no, that's not an error - on steady high you get 2.5 hours, and in eco flash mode, up to 62 hours (front) or 55 hours (rear). Alas, when it does come time to recharge, a low battery indicator illuminates red to remind you. 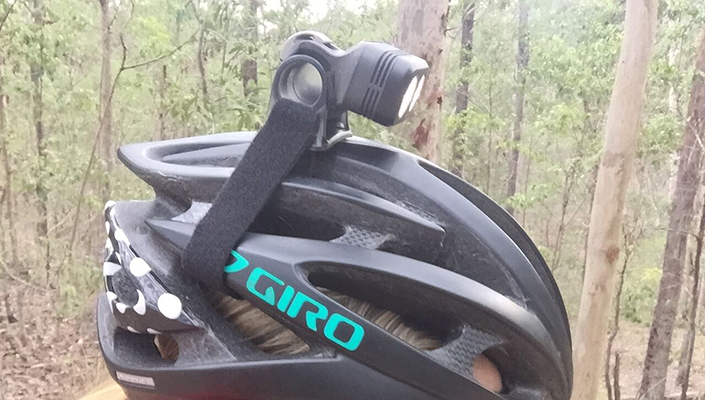 The helmet strap on the Blinder Road should fit just about any helmet with vents
image: Jayne Rutter | BikeRoar 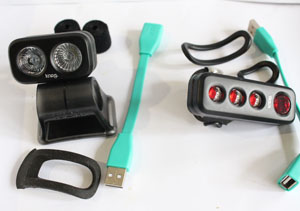 The rubber mount straps are really easy to use. They feel secure, but are also easy to take on and off (which is good if you need to lock your bike up and leave it for the day while you work). They come with two different sizes so you can match them to your handle bar or seat post sizes. The rear light straps are suitable for aero posts.

The head mount for the front light was also easy to use. I could switch the light from the bars to the head mount without a fuss. Using a head mount while commuting means you can ‘make eye contact' with suspect cars who may not see you there (the light packs a punch!). 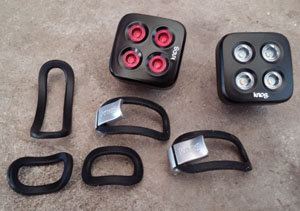 I've used lights with mounts that require being screwed on, making it a discouraging task to take them off, like to swap them to another bike. The Knogs come with tool-less rubber straps, in three different sizes, too, making it really easy to put them on or take them off. They fit onto varying handlebar sizes, over cables, or on the back end on varying seat posts (including aero ones!) or seat stays. Even better, Knog's straps are interchangeable and come with aluminum latches to make pulling the straps and hooking into place much easier on the fingers.

I road ride, most often after work into dusk and the evening. On one bike I mounted the front light on my oversized (31.8mm) handlebar and the rear on my aero seat mast. On another bike I mounted the rear on the left (closest to traffic) seat stay. A small detail that is a nod to the attention Knog puts into their products is the logo on the rear light is correctly readable when the light is mounted sideways on a seat post, whereas the front light logo is correctly readable when mounted on a handlebar. 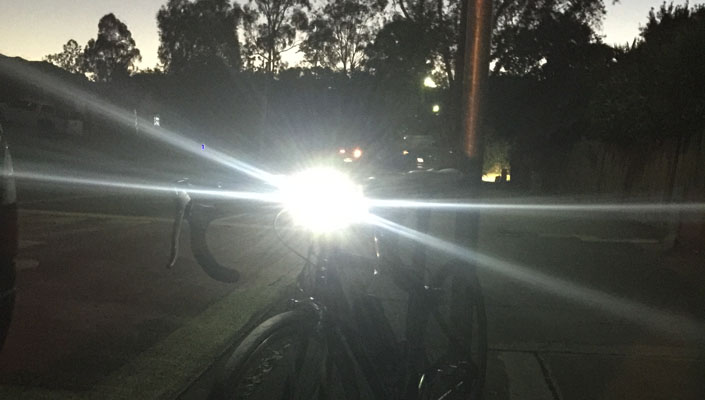 There are a lot of modes on this little front light. The high beam function is good and it shows a blue light (like the one on your car) to let you know you're in high beam mode. There is a mode to have only the right or left light on, flashing, and eco modes. I found there were too many modes (8 for the front light) and it got a bit confusing at times.

Both lights have 5 different light modes - 2 constant & 3 flash. As the category says, they're to "be seen", not to fully illuminate the way. Even so, the front light on strongest solid mode was helpful when the street lights weren't. It's an ample amount of light for the modest size. The rear light has different lenses over the LEDs to diffuse the red light better, making it impossible to miss for drivers behind you. I sure felt seen. The lights also stayed in place despite the jostling of neglected urban roads thanks to the rubber straps and the rubberized backing of each light.

Durability and ease of use 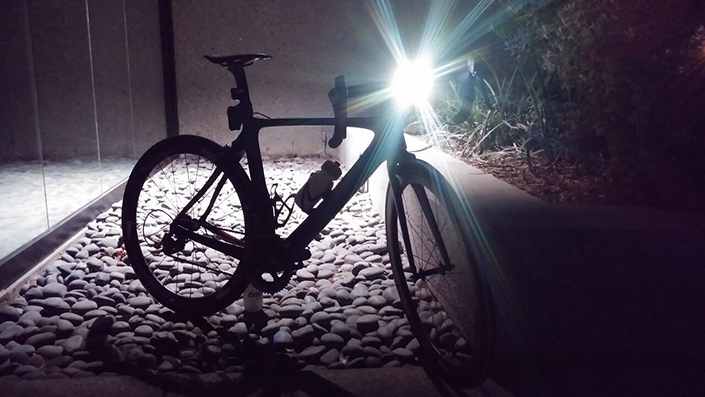 I aim to be gentle, but there have been a few times where they have dropped out of my bag and crashed onto the floor. I'm happy to report that they didn't break. They are solid little things.

The buttons were easy to use on the front light, but the rear was harder to access for larger fingers. But if you have fat fingers it is not a problem! Because the light is so easy to take off, you can unclip it, turn the light on, and put it back on the bike.

In drought stricken California, I didn't have the opportunity to ride them in the rain to test their 100% waterproofness, but they easily survived a few bike washes. The on/off/mode button on each light is a little small and hard to feel and push while on the go, especially if wearing gloves. In spite of dropping them several times when moving them between bikes and for photos, they still work like champs.

The lights functioned really well and were durable over the test period, even after being dropped, washed during a bike wash, and taken on and off the bikes daily. There are a lot of modes available on the lights to suit a wide variety of visibility needs. Internal batteries and USB charging are great as you can easily use a USB port from a wall charger or computer to top up and ensure you have plenty of light for your rides. 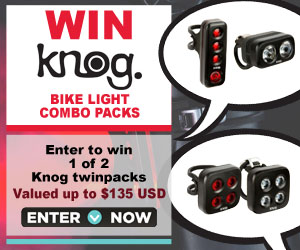 We're giving away a Blinder Road Twinpack and a Blinder MOB The Face Twinpack.

RELATED ARTICLE:
Bike Lights: 5 Things to look for in your next purchase

BikeRoar gives you some great tips on what to look for when buying...READ MORE