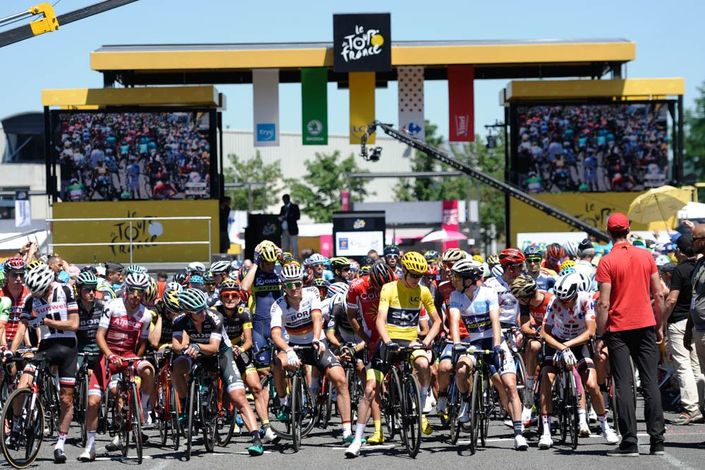 The Tour de France is cycling's grandest spectacle, but not the longest, or tallest, or cleanest, or...
photo: letour.com

For the casual cycling fan, the Tour de France is synonymous with the sport itself. In the collective mindset, le Tour is the biggest, the oldest, the longest, and the hardest race on the planet. But is it really? The BikeRoar team takes a look at some of the lesser-known facts about the greatest of the Grand Tours. 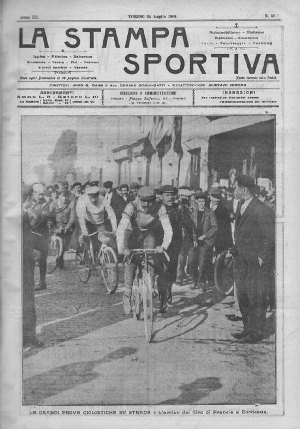 The Tour de France is indeed one of the oldest bike races in the world, having been contested since 1903. But it’s the grand old lady of the Monument Classics, Liège–Bastogne–Liège, that takes the honors for being the oldest race. Held annually in late April, it began in 1892 and is still going strong. The 300km (186 mile) Melbourne to Warrnambool Classic in Australia is a one-day race that’s been conducted since 1895 and can lay claim to being the second-oldest race on the international cycling calendar, with the Tour de France coming in at number three.

With daily stages that have averaged 182km (113 miles) over the past three decades, it’s true to say that the Tour riders cover some impressive distances. But, spare a thought for the riders in the first Tour de France back in 1903, which was contested over 2,428 km (1,509 miles) in just six days of racing. That’s an average distance of 404km (253 miles) per stage! The race was won by Frenchman Maurice Garin. Incidentally, Garin was also awarded the win in 1904 until it was discovered that he covered stage four by catching a train and was subsequently disqualified.

Today, the longest stage race in the world is the Trans-Siberian Extreme, an ultra-stage race that goes from Moscow to Vladivostok. The epic 9,200 kilometer (5,716 mile) contest lasts for 24 days in 14 stages, with stage lengths ranging from 300 km to 1,400 km across five climate zones, seven time zones, the Ural Mountains and four of the longest rivers in the world.

RELATED: The Haute Route: A firsthand experience of what it takes to tackle the world's toughest ride 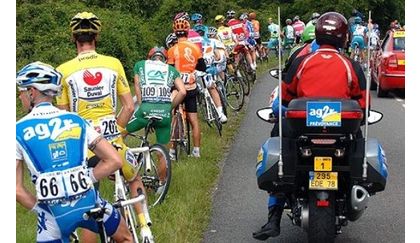 The peloton stops for a "nature break."

It was Garin and his fellow riders back in 1903 who came up with the notion that the race leader’s yellow jersey is sacred, and that the leader has enormous respect and power within the peloton. If the yellow jersey stops for a bathroom break or due to a mechanical failure, the entire peloton is obliged to stop too. This goes some way toward explaining the outrage and vitriol directed at Italian rider Fabio Aru when he attacked race leader Chris Froome in the 2017 Tour as Froome veered toward the road shoulder due to a mechanical issue. It is a ruthless and brutal sport, but it still has an ingrained code of ethics and sportsmanship.

To compete in the Tour is the dream of most pro cyclists, and the owners and managers of the smaller Continental teams say secret prayers each year that they will be awarded one of the coveted “wild card” entries that allow them to compete against the giants of the sport. But the cost of following this dream is very steep, as fielding a team at the Tour is an incredibly expensive proposition. The cost of transport, rider salaries, support staff (soigneurs, mechanics, team doctors, drivers), food, accommodation, equipment and logistical management means that it literally costs millions of dollars to make an appearance at the Tour. Team Dimension Data sports director Rolf Aldag explains that although bikes and equipment are supplied by team sponsors, the costs of running a team are astronomical. 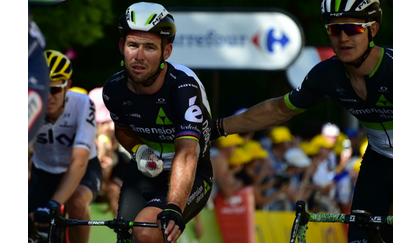 “The food, the accommodation, the incidental expenses — and of course, the wages of the riders and all the team staff — it all adds up,” he said. “For a small to medium-sized team it costs upwards of $10 million a year to keep the team going, and it is two or three times that much for the bigger operations. The Tour de France is the biggest investment that a team will make each year, so it’s fair to say it could cost from $3 million to as much as $8 million just to ride the Tour. Do we recoup that investment in sponsorship exposure and potential new investors? If we do our jobs right and win a few stages and get plenty of TV airtime then maybe we do. But throw in a bit of bad luck, a few crashes and then the answer is probably ‘no’.”

There is another cost associated with the Tour; an environmental one. The race might be powered by pedals, but the accompanying circus of media, team vehicles, race organisers and spectators definitely isn’t. Consider this: there are 198 riders in the Tour — 22 teams, 22 team buses, 22 team vans, 44 official team cars, 4 official time-check motorcycles, and 250 extra vehicles including neutral service, official and VIP cars, ambulances and medical support, media cars, video and still photography motorcycles, and the vast array of garishly-painted mobile advertisements that make up the Tour parade. Additionally, there are hundreds of freelance photographers, bloggers, and print journalists that follow the Tour circus. This creates a huge amount of pollution and waste — an aerial survey conducted in 2015 found more than 200,000 plastic water bottles were discarded by spectators every day of the Tour! In 2016, after pressure from environmental groups, the Tour organisers launched a comprehensive waste management action plan to limit pollution and keep the Pyrenean meadows and Alpine passes as pristine as they were when the first Tour passed through more than a century ago. 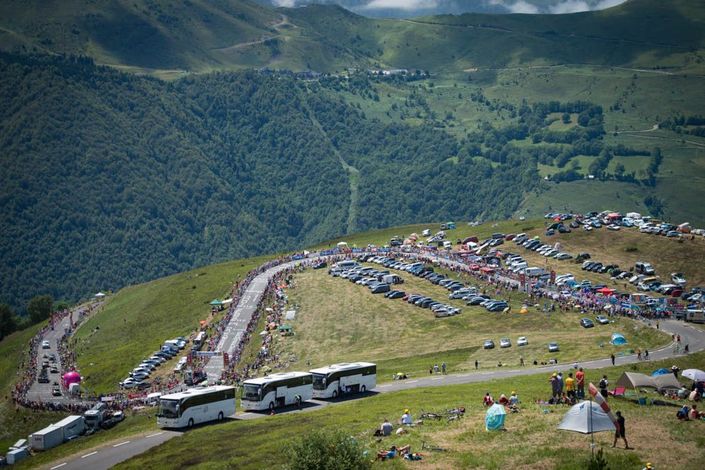 Tour de France organizers are working to minimize the impact of the huge race and its mass of fans.
photo: letour.com 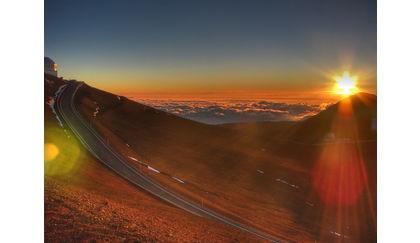 To the casual observer, those Alpine climbs look enormous — and they are certainly spectacular, with their own folklore and snippets of Tour history. The highest climb encountered in the Tour is the Cime de la Bonette-Restefond at 2,802 m (9,193 ft), and it featured in the 1962, 1964, 1993 and 2008 editions of the race. That’s a big climb — but it dwarfs in comparison to the Hawaiian volcano of Mauna Kea ("white mountain"), which is considered one of the most extreme cycling climbs in the world. From the beach in Hilo to the telescopes at the summit it's 4,200 meters (13,779 feet) of altitude gain in one continuous climb. Climbing these mountains, and of course coming back down, is spectacular and dangerous in equal measures. 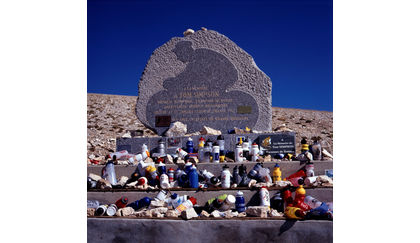 A memorial to Tom Simpson lies 1km before the summit of Mont Ventoux. photo: Andreina Schoeberlein on Flickr

The riders of the Tour de France have seen their share of tragedy over the years: Spaniard Francisco Cepeda plunged to his death into a ravine in 1935, Olympic gold medallist Fabio Casartelli died after a crash descending from the Col de Portet d’Aspet in 1995 and, perhaps most symbolic of the turmoil and heartbreak that the Tour represents, Britain’s Tom Simpson died from heart failure whilst climbing Mont Ventoux in 1967 that resulted from a deadly mixture of heat exhaustion, amphetamines, and alcohol. And perhaps most bizarre of all, Frenchman Adolphe Heliere died during the 1910 Tour when he drowned in Nice whilst swimming on a rest day.

The Tour de France may not be the most dangerous race on earth, or the longest or the oldest or even the hardest — but it is watched by nearly four billion people each year and, for whatever reason, captures the spirit and beauty of the sport of cycling better than any other race on the planet.

Ever wondered how professional cyclists fuel three hard weeks in the saddle? We give an insight into a 6000 calorie day! READ MORE