The Haute Route: A firsthand experience of what it takes to tackle the world's toughest ride

The Haute Route is one of the most gruelling and rewarding rides
image: www.hauteroute.org

Like many who have pulled on the Lycra, I have often wondered what it would be like to be a pro, where your sole focus each day is simply to ride your bike. Unfortunately, my meagre physical abilities meant this was likely to be never more than a pipedream - until, that is, the advent of the Haute Route.

For the uninitiated, the Haute Route is a series of week-long sportives in which rank amateurs like myself get the chance to ride some of Europe's most famous climbs. In the summer of 2015, seven-day rides through the Pyrenees, the Alps, and the Dolomite mountains were on offer. The Haute Route is organized like a full Grand Tour, where each morning there is a grand depart from the middle of town, there are motorcycle escorts and outriders, there are time limits, feeding zones, Mavic support vans, and a legion of volunteers who patrol every village and intersection the ride goes through. It is not for no reason that it is billed as a highest and toughest cyclosportive in the world. 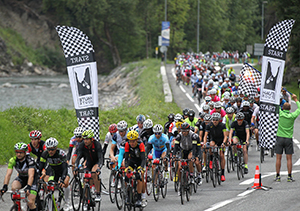 As I approached my 50th year on the planet, I was looking for a suitably momentous cycling adventure, and the Haute Route seemed to fit the bill. Originally, I planned to ride just the Pyrenees, but my wife argued, with compelling logic, that if I was going to fly around to the other side of the world to ride my bike I should do the whole thing. I didn't do the sums, but on a dollar-per-meter count, it seemed to make sense. Before I knew it, I was signed up to do the Haute Route Triple Crown, which would involve cycling 2700kms through the Pyrenees, the Alps, and the Dolomites in just 23 days - climbing more than 60,000 meters in the process. All I had to do was convince my legs (and my bum, back, neck, arms, and even hands) that it was a good idea as well.

Up to this point, the biggest ride I had done was the Peaks Challenge Falls Creek (Victoria, Australia) a couple of times, plus Round the Bay in a Day, a four-day training camp in Bright, and several Deadly Treadly tours (where the focus was on imbibing rather than peddling). This was going to be an altogether different experience. To put it mildly, it was a blast. 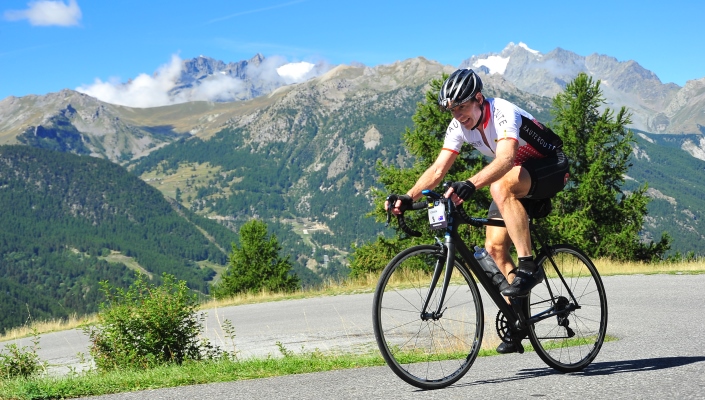 Zipping through little mountainside hamlets lined with clapping locals, hurtling across village squares and through cross roads, all without barely having to touch the brakes, was exhilarating. So, too, were the views. To actually ride up cols I had only ever seen in late-night broadcasts of the Le Tour and the Giro was unforgettable - particularly so because I probably took about three times as long as the slowest pro. The Haute Route took us up and over many of the iconic climbs - the Tourmalet, Hautacam, Izoard, the highest mountain pass in the Alps, Col de la Bonnette, the Col de la Croix de Fer, the Furka Pass in the Swiss Alps, the Gavia and the Giau in the Dolomites. 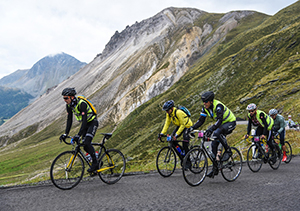 One of many gruelling climbs in the Haute Route
image: hauteroute.org

As the three weeks unfolded and the kilometers mounted, the novelty of being a bike "pro" gradually morphed into a familiar rhythm - get to the end of the stage, quickly quaff some recovery drink, scoot to the hotel, book a massage, have a quick shower, get your gear ready for the next day, go to dinner, and then crash. But constant challenges and changes meant no two days were ever alike. On some there was barely a flat spot, while on others two summits would be separated by a long valley haul where joining a bunch was essential to save much-needed energy. Occasionally the route went along a major road, at other times along riverside bike paths.

Just about every night meant a new town and hotel. Some days finished with a transfer - including, memorably, finishing the Pyrenees ride on the outskirts of Toulouse and catching a flight to Nice in time to start the Alps leg. On top of this, each week the character of the ride changed as a new influx of cyclists descended on the event. For those of us doing the Triple Crown, it was almost like doing a stage race in which 90 per cent of the peleton was replenished with fresh riders at the start of every week. It meant that there was a constant cavalcade of new people to meet and be entertained by. 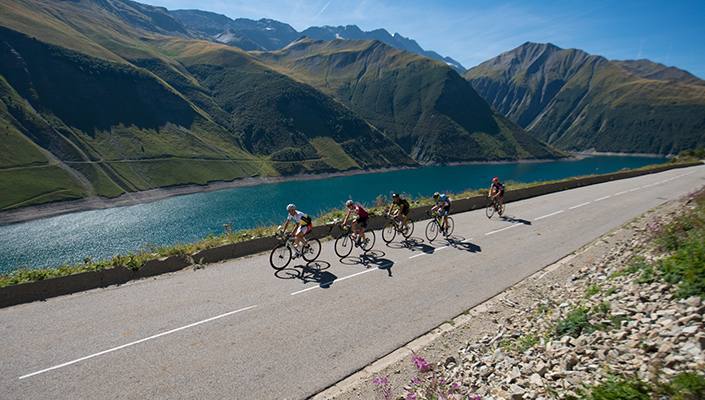 Aside from the spectacular scenery, tortuous climbs, and demanding descents, the fact is that when you draw together 600 keen cyclists from around the world, you are bound to see some pretty unusual and amusing sights. Like the jostling among riders huddling in the narrow doorway of what looked like an electricity substation at the summit of the Izoard in a vain attempt to shelter from a massive storm lashing down. Or the spray of excrement that showered a bunch as it hit a 200-meter patch of road on the Tourmalet that was smeared in a layer of cow manure.

RELATED: How to never get a cramp ever again 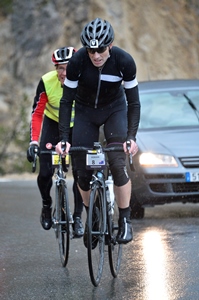 Alongside the weird and wonderful sights, there were the inevitable crashes as people explored - and occasionally exceeded - the limits of their ability. Nestled in the heart of the Alps, the Col de Madeleine is a challenging climb. But the struggle up is worth it for the glorious descent. Perfectly engineered switchbacks cut a sinuous path through the heavily forested flanks of the mountain before entering a deep and lush valley with sheer rock walls rearing up one side, and a sharp drop to a river on the other. It feels made for fast descending.

Unfortunately, it brought several bad luck. As I came around one bend I flashed past a figure in blue and black lycra crouched by the side of the road clutching his right shoulder in the classic "I think I've broken my collarbone" posture, with the motorbike medic just pulling up to render assistance. A couple more kilometers down the descent, people were swarming by the side of the road where an ambulance had stopped. A cyclist had lost it on a sweeping bend and gone over the side. He had landed in the upper branches of a large pine tree and broken his femur. The rescue crews had to winch him down.

Staying upright and healthy for the whole three weeks is a big part of the challenge, and just about all those who attempted the Triple Crown were at some stage forced to battle illness or injury. Incredibly, just about all those who embarked on the journey in Anglet made it through to Vienna. The Haute Route is not a race, but daily time limits mean it is not a cruise either. 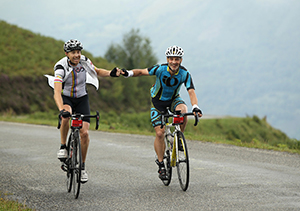 The Haute Route brings out the team player in everyone
image: hauteroute.org

The 28 of us who embarked on the Triple Crown would climb what seemed like dozens of cols before reaching our destination in Venice on September 6. Along the way we experienced just about every sort of weather and terrain nature could throw at us - blisteringly hot ascents, ice cold descents, thunderstorms, howling winds, long valley drags, pine clad passes, barren rock-strewn slopes, roads that morphed into little more than goat tracks, and sinuous switchbacks that went on for what seemed hours.

Physically, it was an enormous challenge that honed my climbing and descending ability, not to mention my bunch riding skills. But it was an equally big mental challenge. Often people say they "find themselves" on such adventures. I can't say that happened for me. What I did find was that:

(a) Europe has a LOT of cows.
(b) You have to be careful where you step in the bushes behind rest stops.
(c) You can get out of bed and onto a bike while still half asleep.

If you want to hone your capacity for doggedness and persistence, the HR Triple Crown is the perfect place to do it. There are undoubtedly tougher one-day rides on the calendar, but it is hard to dispute its claim to being the highest and toughest cyclosportive in the world. A new Haute Route will be staged through Colorado's Rocky Mountains in 2017. For my sins, I have signed up.

The Haute Route - My top 10 tips to success

For more on my Haute Route adventure, visit: https://mamilinthemountains.wordpress.com/. 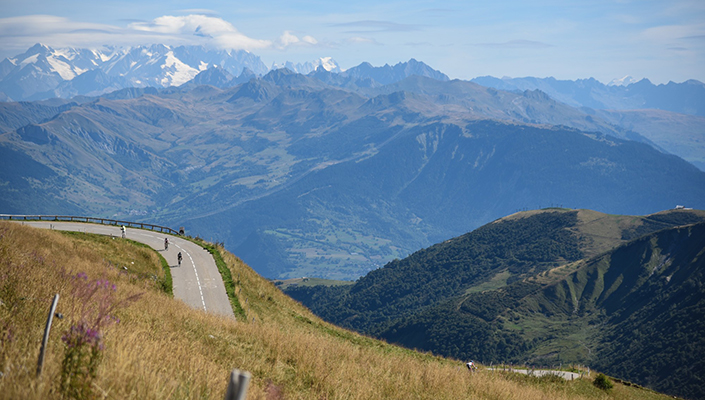 RELATED ARTICLE:
Preparing for your first "Big One" (the 60 mile, 100km bike ride)

If you're thinking of racing in your first grand fondo, or just pushing your distance riding on the weekends, you might want to read through these tips

BikeRoar gives you some great advice on how to ride...READ MORE

Looking to change things up on your road bike? maybe you should try running wider tires