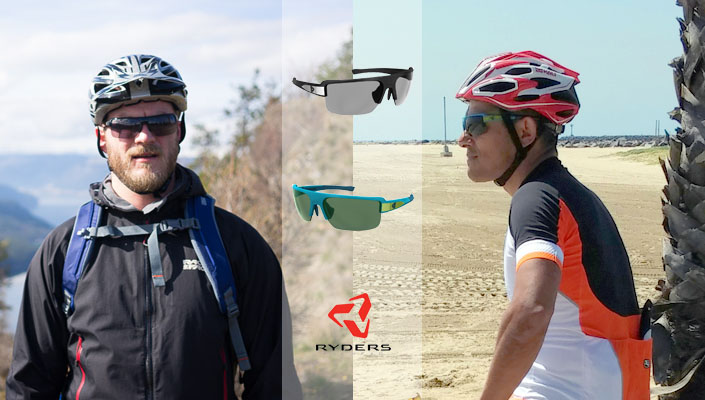 Ryders Seventh may just be the best value riding glass on the market.
image: BikeRoar

Ryders Eyewear embodies the for-riders-by-riders mentality, with roots that began over 30 years ago in the damp North Vancouver mountains. Supporting more than just riders, they also support trail societies themselves, making sure they are able to give back whenever possible. The extreme conditions found back home in the Pacific Northwest inspired Ryders to become a leader in moisture management and photochromic lenses, all while retaining value in their product.

BikeRoar got the chance to test out Ryders Seventh in both the veloPOLAR, and antiFOG Photochromic, on both the road and the trails. Ryders boasts a slew of practical technology in their glasses and we were able to put it all to the test. For sake of clarity, let's quickly run through the tech in Ryders glasses.

Regular polarization blocks glare, which can sometimes mean it's blocking out a slippery section of road. It can also make it difficult to read the LCD screen on your bicycle computer. Ryders veloPOLAR is specifically tuned for road cycling. By tweaking the polarization and the color of the lens, Ryders was able to make a lens that minimized the effects on LCD screens and enhances definition and contrast while out on the roads.

Ryders use a brilliant mix of hydrophilic layers on the back and hydrophobic layers on the front of their lenses. This means the back of the lens will absorb moisture so it doesn't condense as fog and will allow the wind to dry/carry it away. The hydrophobic layer on the front of the lens dispels any moisture immediately leaving no streaks or droplets.

Photochromic lenses contain millions of UV sensitive molecules that change shape depending on the amount of UV light. When the lenses are exposed to bright light the molecules begin to absorb light, making them darker, subsequently when there is less light present they become clear. It doesn't take a scientist to see how beneficial this could be for riding bikes.

Our test riders and glasses: 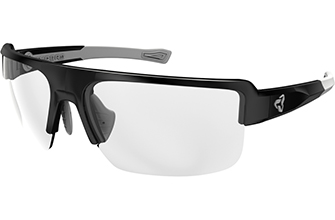 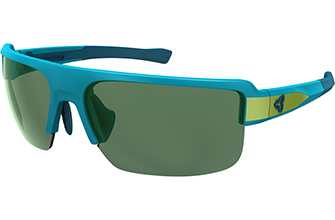 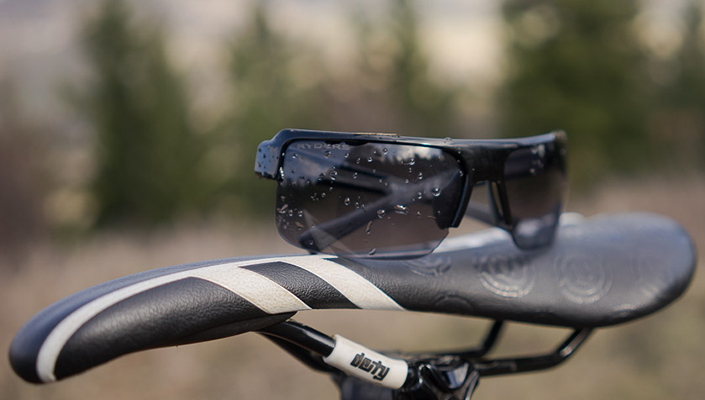 A: They're not exactly my style of casual glasses wear, but when I got suited up for a road ride and slipped the glasses on they felt and looked just right. Seventh comes in a good assortment of frame colors and lens tints. The blue green matches my SoCal vibe.

J: A few casual style points make the Seventh a decent looking everyday sport glass. It doesn't scream 'professional racer' in its looks, so I feel you won't tire of it easily. I had a set in simple gloss black, which is my style. With that being said, the Seventh comes in enough colors to keep anyone happy. The materials used were light, flexible, and seemed quite durable. 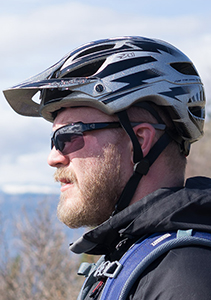 A: Adjustable nose pads are great. I have a relatively standard size face, but being able to tune the nose pads helps get the fit just how you like it. In my case, it let me set the glasses to sit slightly higher on my nose and face in order to help with visibility when I have my head down into the wind. Lens area is generous and offers good visibility. No distortion looking from the edges to the center.

J: I am incredibly picky when it comes to the fit of any set of glasses I choose to wear. I have a large head with large-but-proportionate features and I tend to put eyewear though its paces. I found the fit of the Seventh to be a bit small for me; I could always see the entire top of the frame when I was head down and pedaling. I adjusted the nose pads and temples of the glasses in an attempt to get them to sit higher, but I could not find a position that worked. Again, I do have a larger than normal head, but I always appreciate glasses that give me full coverage. The lenses were clear of any distortions and did a great job of keeping all that early season mud out of my eyes.

J: I've always had mixed feelings when it comes to light sensitive lenses: If they don't react fast enough then you could be barreling into the shaded trees not being able to see much. Ryders, however, did such a good job tinting their glasses that it was no issue at all. The light grey photochromic lenses in my Seventh glasses transitions from 75% light admittance to 26% seamlessly. The light grey tint provides enough light shading to cut the sun's intensity in the open, but are also light enough for me to still see in the trees. Going from bright open space into the dark trees at 20mph was no issue, and that was a relief.

A: The veloPOLAR polarized lenses are excellent. I could see my computer display without having to cock my head at an odd angle and my general view of scenery was nice and sharp on a sunny SoCal ride by the beach. Glare was cut down significantly, which is a huge plus when riding around the ocean and in-and-out of busy SoCal traffic. The contrast on the road was also great, providing a clear and accurate view of the road surface. 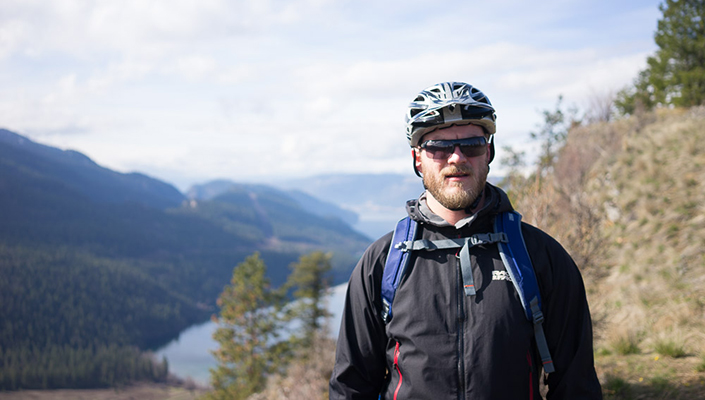 Fog free at the top of the gruelling climb.
image: Josh Palmer

A: I rode the glasses on a cooler overcast morning another day to test the antiFOG tech. What usually happens is I get going on a ride, quickly work up some heat and sweat, and then catch a traffic light where my glasses fog up and I can't see well. I slide them forward to breathe or take them off until I get moving again. With the Seventh antiFOG, problem solved. I had no fog at any time and that was that. Not sure I'd tested the antiFOG enough, when I got home from my ride I wore the glasses in a hot shower. Again, the hydrophobic front and fog-resistant back worked wonders. It was only after some steamy minutes I could see beaded up water forming on the inside, but it would shed and was a a lot easier to see through than fog.

J: I've worn almost every kind of glasses made for riding bikes and I usually end up tossing them in my bag as soon as I start to build up heat and sweat. The Seventh, however, was fantastic; Ryders antiFOG technology worked very well. When I'm grunting my way up an hour long climb it's not always possible to move enough air across my glasses to keep them fog free. The Ryders did a great job of staying fog free even on a slow climb. The hydrophilic layer on the inside of the lenses did keep the condensation to a minimum but that did not stop it from collecting liquid moisture on its surface. When the hydrophilic layer reaches its maximum capacity it seemed to turn the sweat vapor into liquid, but, this was a lot more manageable that dealing with fog. I highly recommend Ryders antiFOG technology.

With a price tag of $129 for the Photochromic and $149 for the veloPOLAR Seventh from Ryders, it's hard to say there is a better riding glass on the market for the price. The features and technology Ryders has incorporated in their glasses work well. I have a tendency to be ultra picky and put glasses through their paces and yet the Ryders Seventh exceeded my expectations. Despite my clumsy efforts to scratch the lenses (I dropped them then ran them over with my Trek Slash), they've stayed in perfect shape. Ryders eyewear's ability to stay fog free is worth the sticker price alone. When you combine their antiFOG technology with veloPOLAR or Photochromic lenses, you have one of the best and most truly useful set of riding glasses on the market.

Ryders antiFOG veloPolar are available in these styles: Seventh, Nimby, Caliber, Invert, Strider, and Crankum, with a selection of frame and lens colors.

Cycling is a beautiful sport. It can also be quite expensive to get started. Apart from the initial purchase of a bike, there is a fairly hefty list of equipment and accessories that are necessary before jumping on your new wheels and taking off. We have created a list of essentials for every road cyclist to be perfectly equipped... READ MORE