What do these bicycling signs mean? 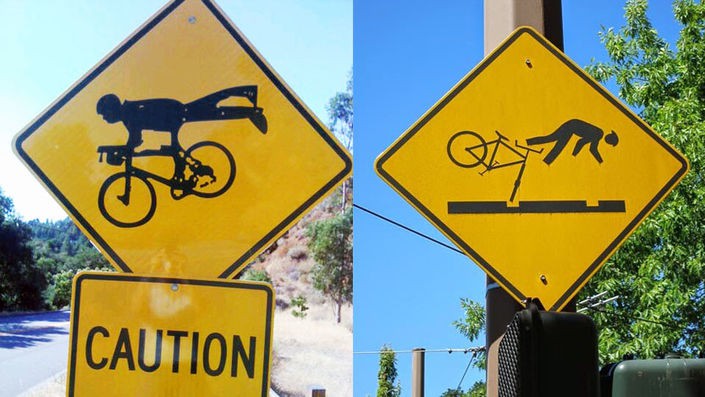 Signs vary from regions and countries across the globe, so It’s no wonder that people struggle to follow what they mean, missing the intent of their guidance or warning. You don’t need a driver's licence to jump on a bike and ride, so clear signage for cyclists is critical, as is a dose of common sense.

Here's a rundown of some obvious and not-so-obvious signs and markings bicyclists should know and understand. 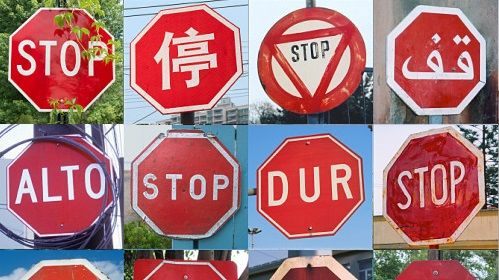 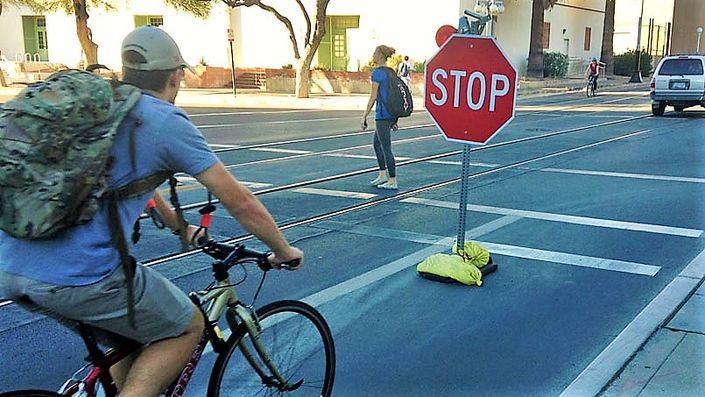 You would think that the meaning of a ‘stop’ sign is obvious, but I’m fairly certain that there has been a time that you have not stopped requisitely before pedaling off. A stop sign means you have to completely stop and check that the road is clear, then move. In Australia, you can’t roll a stop sign... that’d be a $350 fine and 3 demerit points. In some places the ‘rolling stop' may be accepted, but I’d check first. If you don’t stop and check that the coast is clear, you also risk being run over by a car. 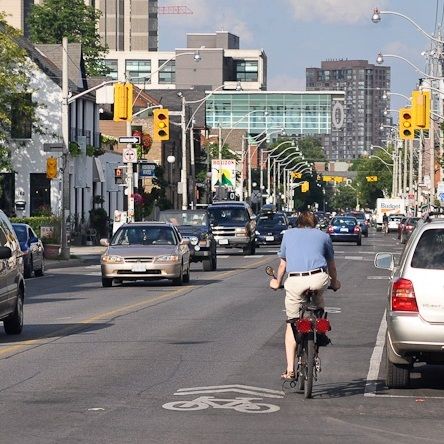 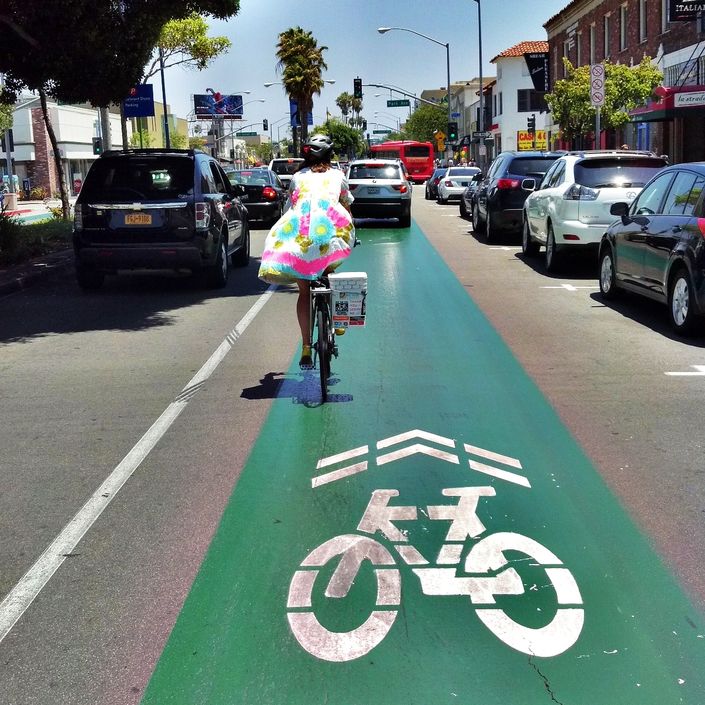 The ‘sharrow’ or ‘shared lane marking’ on the road looks like a cyclist with a house over their head or a cyclist jumping over a house, depending on which way around the graphic is. They are meant to help the cyclist know where to ride on the road, the right direction to ride, and also give the safe distance between the rider and parked cars (to avoid getting ‘doored’ by a car). Sharrows are also used to remind motorists that bicycles have rights to the road, too, so they're often placed on roads used frequently by cyclists that don't have bike lanes, sometimes with the entire lane painted in blue or green to further highlight the point. Don’t panic if there are no sharrows marked on a road, though. Ride confidently and safely, and if you aren’t sure on what direction to ride, it may just be easier to look at the direction the cars are traveling and follow them. 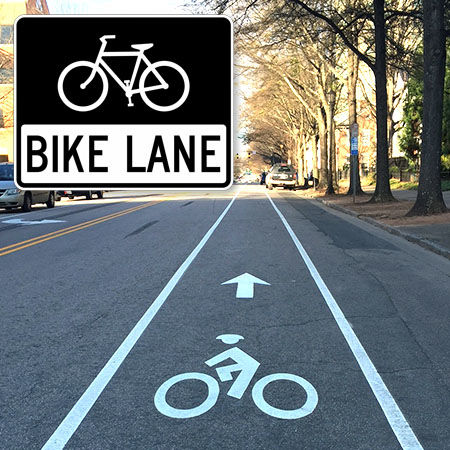 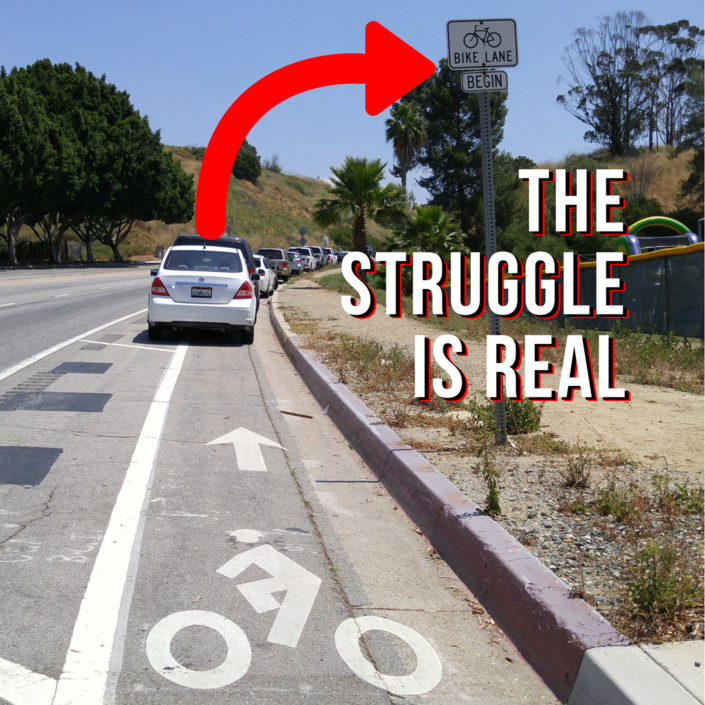 This sign or road marking means that cyclists have a ‘safe-ish’ place to ride. It is an area clearly marked as a bike lane and is often set out from the gutter. The picture of the bike painted on the road actually means that the lane is exclusively for cyclists to ride in, not for cars to drive. For cars, this also means ‘No Parking’, but sadly it is often ignored without consequence to the driver. A bike lane is not a barrier, so bicyclists must continue to be aware and use caution, especially when parked cars or other obstacles or debris force them out into regular traffic lanes.

Bike symbol on the road 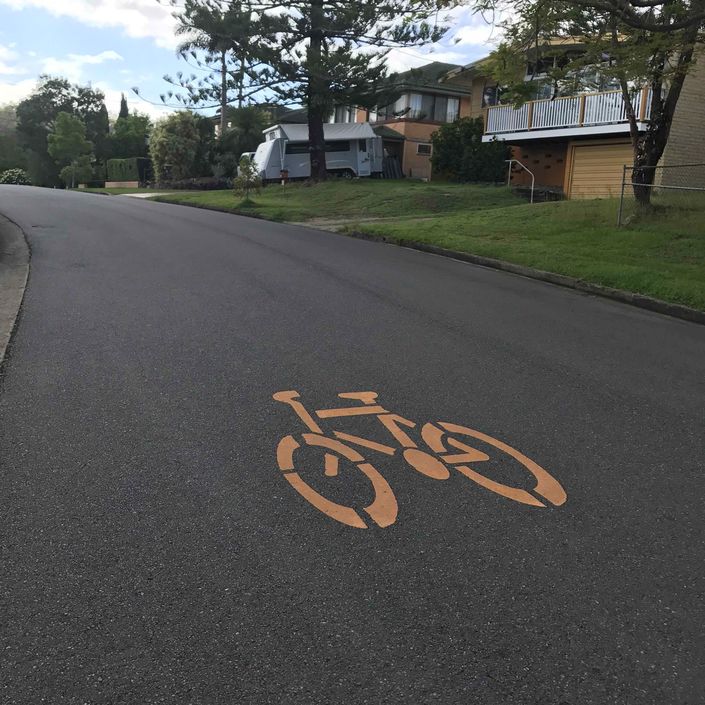 Sometimes you’ll see simple bike symbols on the road with no other accompanying marks, either on the side or right in the middle. These markings don’t mean you get to ride blithely in the middle of the road; they don’t provide the cyclists any special protection or rights. The markings simply show motorists that the road is commonly used by cyclists and that they should look out for bikes – they're much like sharrows in this way, creating a ‘bike awareness zone.’ In reality drivers should look out for bikes at all times, not just when they see the marking on the road. 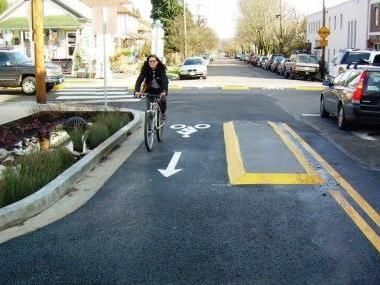 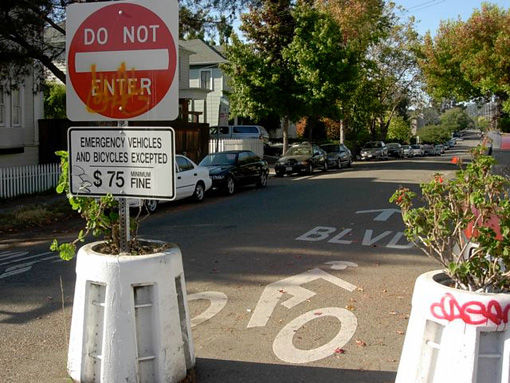 These marking, often the same as bike symbols or sharrows, are used to help designate bike boulevards or neighborhood greeways – areas of roadway where motorized traffic is restricted to prioritize bicycling and walking. These areas use traffic calming techniques to limit cut-through traffic and reduce motor vehicle speeds. They may use slow points, speed bumps, indirect routes, and one way streets to make more peaceful and safer roads to ride on. 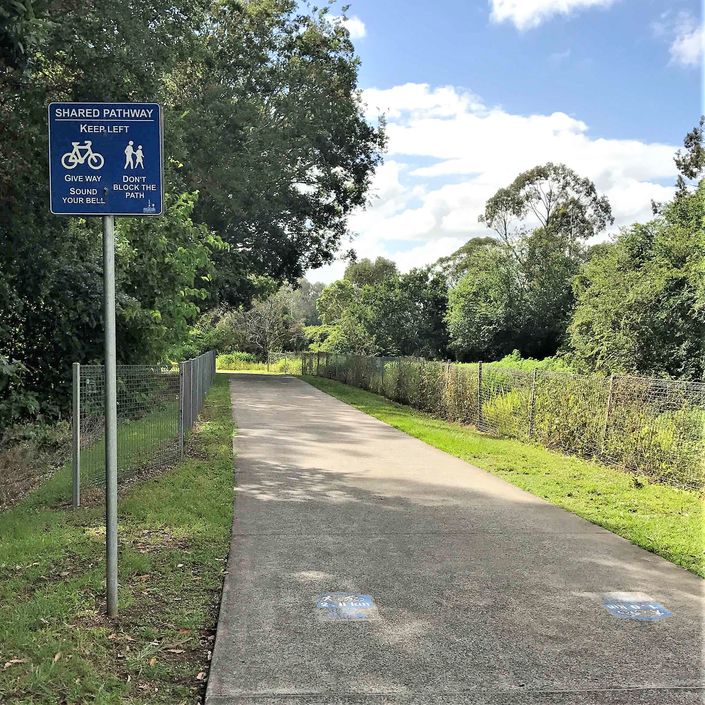 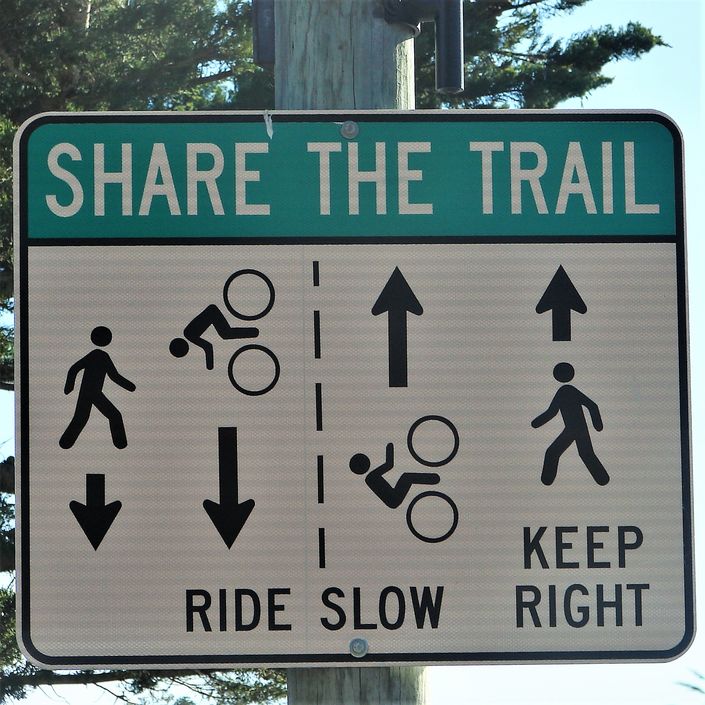 These pathways or trails can be used by pedestrians, cyclists, scooters, skateboarders, and electric bicyclists. They are meant to work with pedestrians keeping to the outside, in the direction of traffic (left in Australia, right in the U.S.) and the cyclist giving way and overtaking. This sometimes involves dodging other wayward pathway users or riding really slowly, waiting for a walker with headphones on to hear your bell or to notice you and move aside. 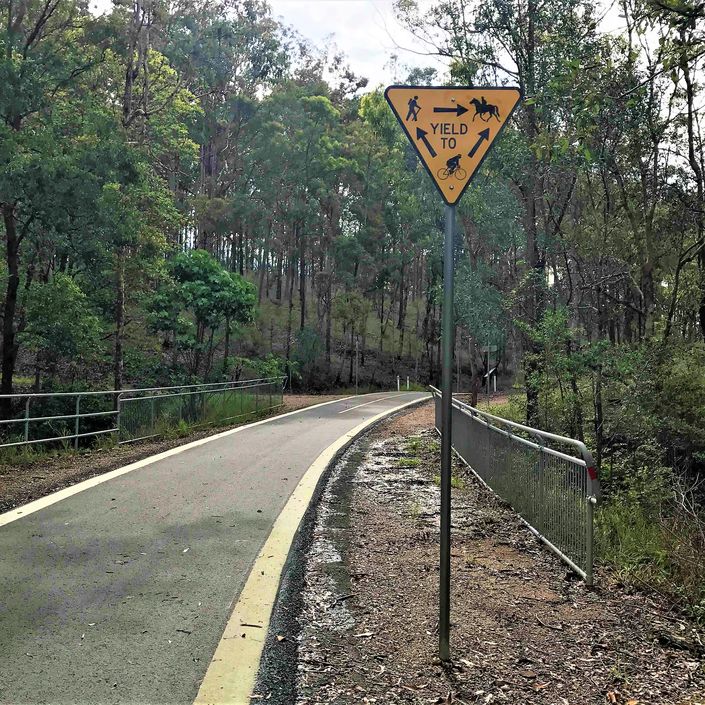 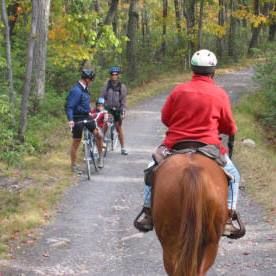 This is a fairly self-explanatory sign: bikes yield to pedestrians / hikers and bikes yield to horses. Horses get the right of way from both hikers and bikers. Cyclists should use extra caution when yielding to or overtaking horses; they are huge and capable of bolting or bucking their rider off if startled. Pull over to the side and let the horseman pass, or call out calmly and let the horse rider acknowledge you and make way, then steadily pass with a wide berth. 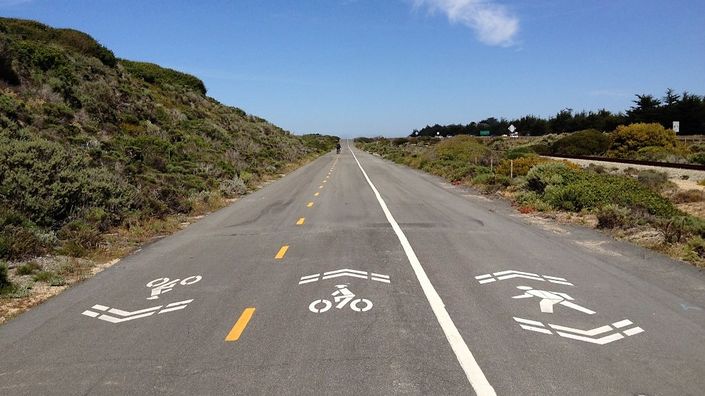 These are great – the holy grail of commuting by bike. One side is made for cyclists and one side for walkers and they're separated from the road. This means you can smash out an effort and go for a Strava personal best without worrying about walkers. Commuter racing is great fun on these paths, too. Take these signs to mean ‘ride as fast as you can without worrying about walkers' (but do mind other riders). 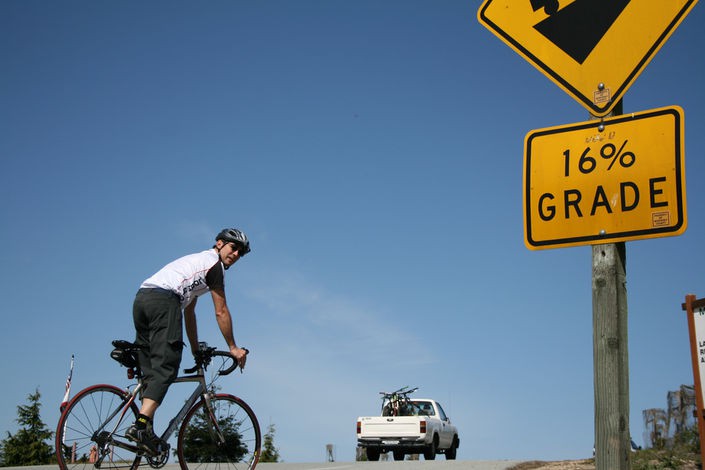 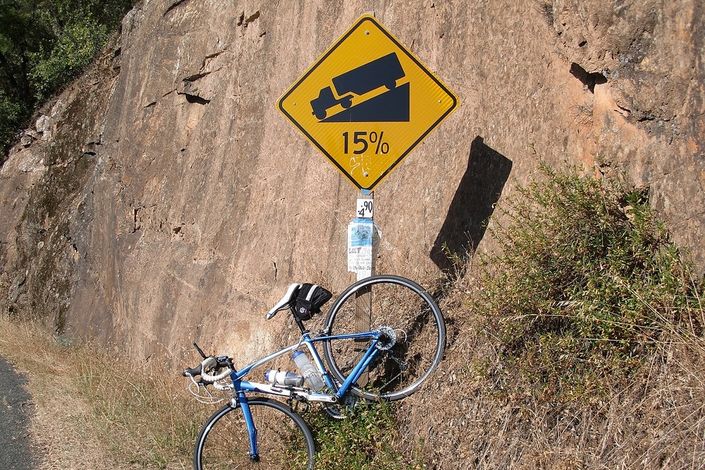 No bikes on these signs – it's the numbers that tell the real stories. To some bike riders, these mean ‘grip the bars, crank over the legs, and aim for your KOM/QOM.’ To other riders it means ‘click into the easy gear and prepare for pain’ or ‘find an alternate route as this is ridiculous.’ It's the downhill everyone looks forward to – just watch your speed and cornering, and make sure you don't cook your rim brakes. 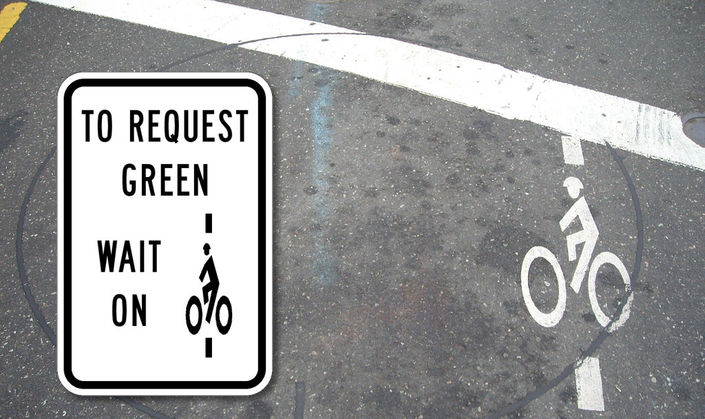 Better yet, traffic engineers are beginning to tune their sensors for bikes and sometimes place sensors especially for bikes, like in a bike lane, and mark the sweet spots to trigger them. They're usually paired with bike buttons, allowing a rider to still get the light even if their bike doesn't trigger the sensor (we're looking at you, carbon weight weenies). Thanks for thinking of us, traffic department. 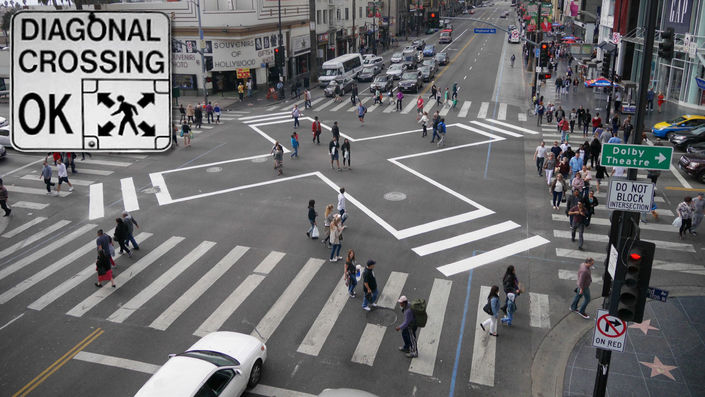 You'll notice scramble intersections by the amount of paint laid down to mark crossings – in the traditional directions and also diagonally from corner to fully opposite corner. Here, each direction of vehicular traffic gets a light sequence, then they are stopped and pedestrians and cyclists get their own light sequence, allowing them to cross safely in all directions. For this reason, scramble intersections can be frightening – a crazy mass of people, prams, and sometimes bikes, all trying to cross the intersection in all directions simultaneously. There is no order; it’s a free for all and you have to dive right in and hope you don’t have to do that awkward dance where you move to one side for someone and you both go the same direction, then again, and again (sometimes referred to as the ‘sidewalk shuffle’ ).

Cyclists are usually okay to proceed during the 'pedestrian' phase of scramble intersections, though it may be impractical because of the density and uncertain movement of pedestrians. Riding through normally could end up with someone getting hurt. For safety, cyclists can advance cautiously, yielding to pedestrians, or dismount and walk. Another alternative is to ride as a vehicle and wait for the appropriate traffic light sequence. 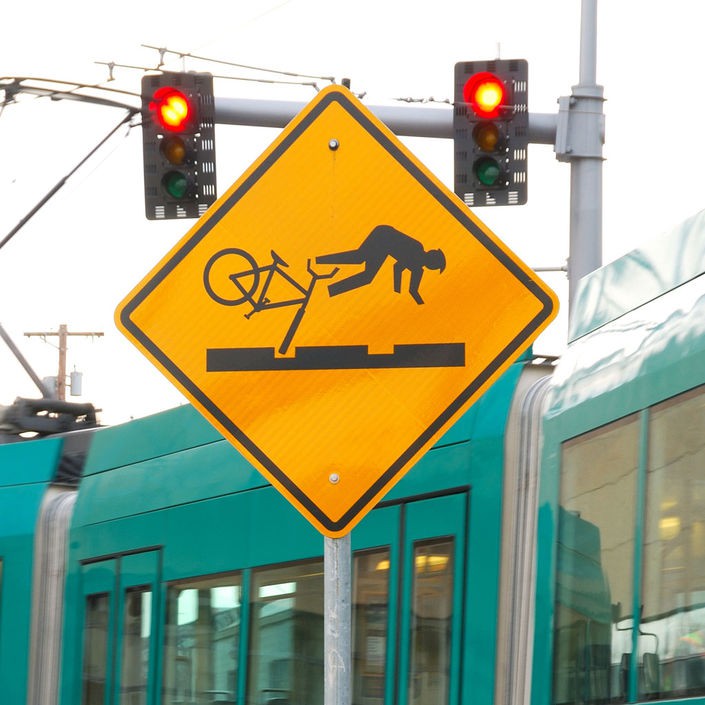 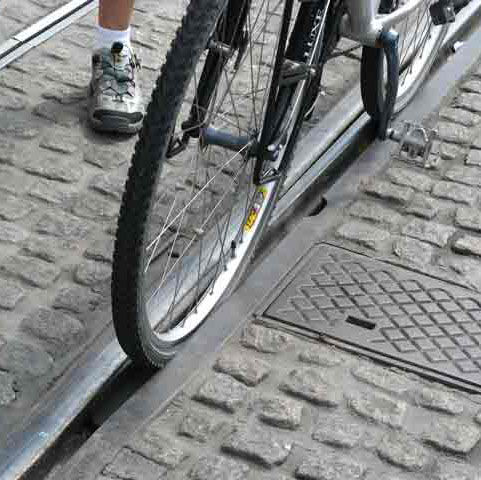 This sign isn't about the train that could hit you, it's about those sneaky tracks. Even when they're not wet and slippery, they're dangerous if approached at too shallow an angle; the gaps between the tracks and the pavement are well known to eat bicycle wheels, stopping a bike 'in its tracks' and sending the rider OTB (over the bars), like this.

Cyclists should do a few things when crossing train tracks. First, make sure the coast is clear. Second, be prepare for rough pavement with a good grip on the handlebars. Third, approach and cross the tracks (and their gaps) as close to perpendicular as possible. 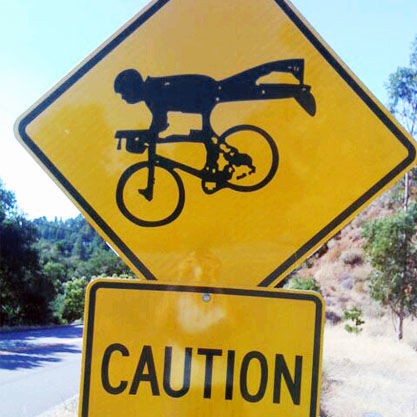 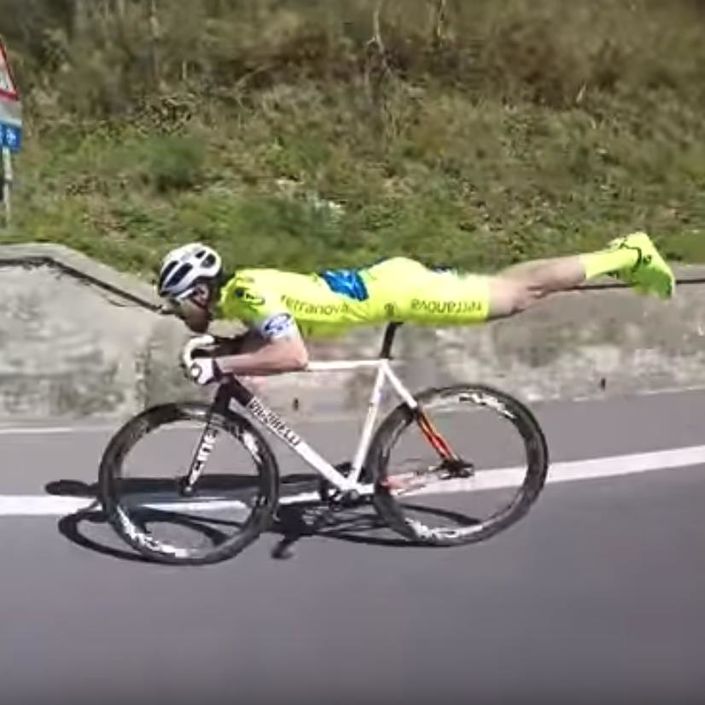 This one is open for much interpretation: perhaps it's warning you of riders doing Superman stunts ahead, or it's cautioning you in your own attempt at Superman heroics, or it's a mountain biker ripping it, or killer headwinds? We couldn't uncover any information as to the origin, placement, or meaning of this sign, so we're calling it a gag.

Being alert, aware and present are the most important skills to have whilst riding on the road. Keep road cycling fun and stay safer by using these pointers... READ MORE

Tires are the consumable we go through most when riding regularly. Stay safe by keeping an eye on the warning signs... READ MORE