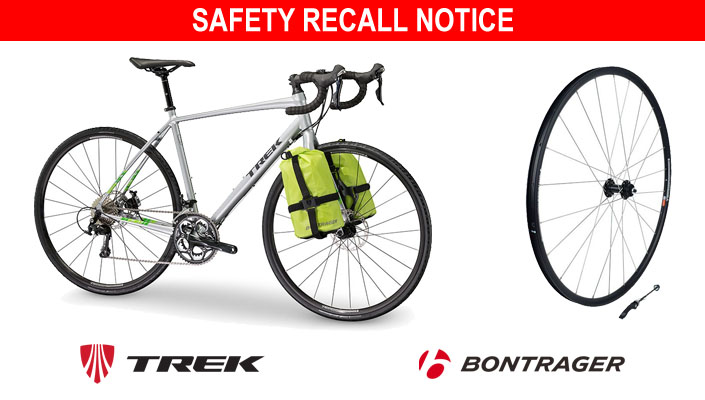 Trek says a limited number of the 720 Disc bikes were made with a wheel set that exhibits a higher rate of spoke breakage and that a broken spoke on the front wheel could engage with the brake caliper, causing the bicycle to stop suddenly. The Bontrager TLR disc wheels on the 720 Disc were also sold as aftermarket wheels and are subject to the recall as well.

Because of the crash risk — Trek received 10 incident reports including one reported injury involving a broken vertebra — consumers should immediately stop using the recalled bicycles and wheelsets.

Trek will replace the wheels on an affected bicycle or an affected aftermarket wheel, free of charge and including installation, through a Trek retailer. In addition, when your recalled product has been repaired, Trek will give you a coupon worth $100 to use toward any Trek or Bontrager merchandise. The coupon is good through December 31, 2017.

Consumers may contact Trek at 800-373-4594 from 8 a.m. to 6 p.m. CT Monday through Friday or online at www.trekbikes.com and click on “Safety & recalls” at the bottom of the page for more information.

RELATED ARTICLE:
Are road disc brakes a menace or a blessing?

Disc brakes made their controversial debut of the Paris-Roubaix road race and were suspended after a rider injury. BikeRoar investigates whether their performance is worth the risk... READ MORE

The ban of disc brakes in the pro peloton has all levels of bike shoppers wondering if it's wise to buy a bike with disc brakes? We examine where consumers and manufacturers go from here... READ MORE