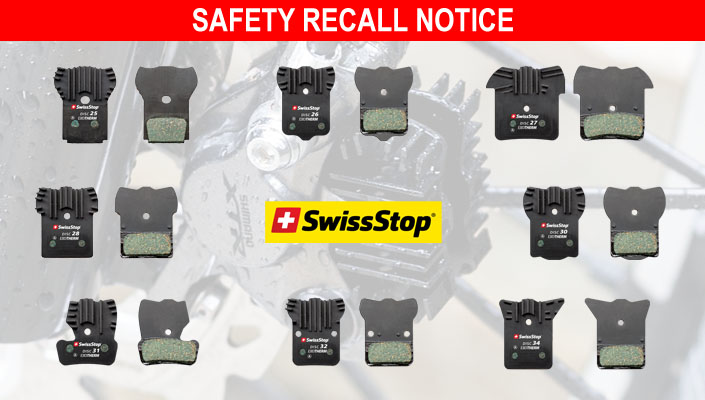 SwissStop has issued a recall of its EXOTherm finned disc brake pads because the the pad friction compound can separate from the backplate, posing a crash hazard.

Only the following models of SwissStop EXOTherm disc brake pads, sold as aftermarket parts, are included in the recall: 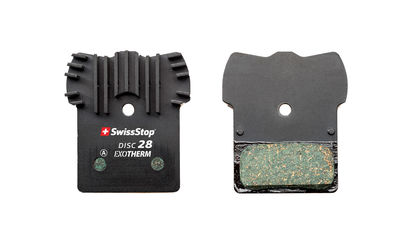 Customers with these brake pads, used for both road and mountain bikes, are advised to stop riding them immediately and contact the local bicycle dealer where they were purchased for a full refund.

SwissStop indicates on their website, "the recall is being conducted with the appropriate national governing bodies," but it is unclear why the recall is only recently announced in the U.S. and Canada, in conjunction with the distributor Helvetia Sports Ltd., while it had already been in effect in other countries last year. For example, the recall notice in Australia, with distributor Echelon Sports, was issued September 1, 2017, through the Australian Competition and Consumer Commission.

In the U.S. and Canada, consumers seeking more information should contact the distributor, Helvetia Sports, toll-free at 866-358-5218 between 8:30 a.m. and 5 p.m. ET Monday through Friday, or by email at steve@helvetiasports.com.

No bite from noisy brakes? We explain why you might need to change the type of pad you're using... READ MORE

Road disc bikes have rolled past controversy and are now becoming the standard, from everyday riders to World Tour racers. Here are our picks of the top ones you should watch and buy... READ MORE