Cyclists fight back to ride two across on the road
photo: Aqua Blue Sport

The organization Coalition of Cyclists has launched a new Change.org petition to maintain the right of Australian cyclists to ride two across, as is legal now. It comes as a counter-response to another petition started five months ago by Drivers For Registration of Cyclists that calls for all Australian cyclists, whom they label "a hazard", to be made to ride in a single file.

In their rallying call to fellow bicycle riders, Coalition of Cyclists says:

By now, those of you in Australia would have heard about the petition to have laws changed to force cyclists to ride single file. This is just another ploy from the 'Drivers for Registration of Cyclists' group to limit the civil rights of tax paying cyclists.

For that reason CyclingMOFOS and Topline Cycles Nerang have teamed together to start The Coalition of Cyclists. We aim to build a vast list of cyclists that will come together in a united front to squash anti-cycling rhetoric and actions such as this petition they have created.

Please join with us in this coalition and sign our counter petition. They already have good numbers so it is important you sign and share this petition to show the government WE ARE NOT ANONYMOUS.

It's generally safer for cyclists to ride two abreast, and as we here at BikeRoar have said before, "most sensible groups will only ever ride two abreast and do their best to allow the free passing of cars when possible." We support safety and sensible riding, and agree with Coalition of Cyclists efforts.

At the moment, the months-old 'Drivers' petition has 109,451 signatures and the new 'Cyclists' petition just 3,596, but off to a strong start. Neither petition can force the Australian government to action, but those with a large amount of signatures tend to get the attention of policy makers. We encourage our fellow cyclists to sign the petition and help spread the awareness to others. 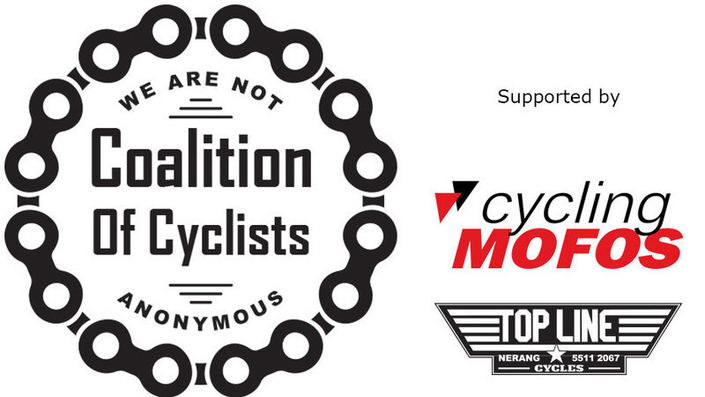 We, the undersigned, respectfully call on the Transport Ministers of each and every State in Australia, and each State Cabinet, to NOT implement Compulsory Single File for all cyclists who ride in groups, regardless of whether a bike lane exists or not.

We also call on the respective Transport Ministers of Australia to NOT implement a prohibition of cyclists on all roads with a designated speed limit higher than 80kph, if those roads don’t have designated Bike Lanes.

We are taxpayers and deserve dollars being spent on road systems with designated bike lanes, however due to the bike lane system being ad-hoc, we reserve the right as taxpaying cyclists to continue to ride 2 abreast on the roads as per the current national road laws. Where needed we reserve the right to move from the road shoulder/ bike lane into the lanes to avoid parked cars, road construction / road furniture, debris, pot holes and other obstructions. We are not safety hazards we are fellow human beings and deserve the same respect all road users should have, we're tired of being told we're a bad cyclist if we complain about this problem.

We, the undersigned citizens of Australia, believe our money is being well spent every time a bike lane is built on a main road allowing more people to use this facility for commuting and recreation, thus removing noxious gas spewing vehicles from our communities.

We believe there is no safer way to ride, based on our existing infrastructure, than riding in groups 2 abreast, as is currently the law . Indeed, every text book on the subject of Risk Management says that “Isolating a Hazard” is a superior solution than changing the way people operate. Building a Bike Lane is an example of “Isolating the Hazard”, Therefore if the bike lane system was as comprehensive as the existing road system, and not ad-hoc as it is, we would be happy to use that.

Again, we say, Transport Ministers of Australia, please DO NOT implement Compulsory Single File and ban cyclists from roads with a speed limit higher than 80kph if no bike lane exists. As this would be a step backwards against our civil rights as citizens of Australia.

RELATED ARTICLE:
Do cyclists ride in the middle of the road simply to annoy motorists?

A bit of prior knowledge will ensure that you will receive a positive experience from your first bunch ride by following the basic list... READ MORE