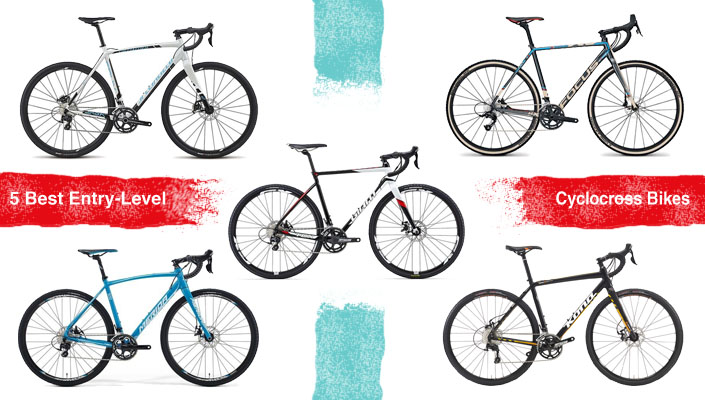 Cyclocross is the new buzzword for those of us that live a life on two wheels - everyone wants to get in on the action. Only four or five years ago a CX-specific bike was a difficult beast to find outside Europe, and once you managed to track one down it was an expensive proposition indeed. Things have changed fast, and now every major manufacturer is churning out an entire CX fleet every season.

If you've just been bitten by the CX bug, or just want a sturdy commuter bike that's also fun to play with on the singletrack, what should you look for?

RELATED:: Cyclocross - What makes it so awesome?

Before we get into specifics, let's have a look at what makes a good 'Cross bike.

Generally, CX frames resemble their road counterparts with some tweaks to the frame geometry that make riding in the dirt more feasible. Look for a raised bottom bracket to give extra ground clearance over rocky terrain, as well as making it easier to negotiate tight turns while pedaling. Cables should be re-routed to prevent mud build-up, and the top-tube underside should be re-profiled to make carrying the bike easier. The frame geometry itself is often slightly longer and more relaxed to improve comfort and stability over uneven ground, and the brake hoods are often positioned higher on the bars to allow the rider more control (and to keep their weight closer to the back wheel to prevent wheel-spin). Bars are generally higher than on their roadie counterparts, and stems are usually shorter to provide more control in the mud and sand. Weight and aerodynamics take a back seat to durability and control.

So basically, it's a stronger, tougher road bike with disc brakes (most of the time) that's been dressed up with gnarly tires and clever cabling to keep the muck out.

Because cyclocross bikes need to be strong, there really aren't any super low-budget deals to be had, even at entry level. No point buying a $500 CX bike if it's just going to break, right?

However, there are some great bargains out there - the 5 bikes we've listed here are not only excellent value for money, they've all been raced extensively in the toughest proving grounds around the world. 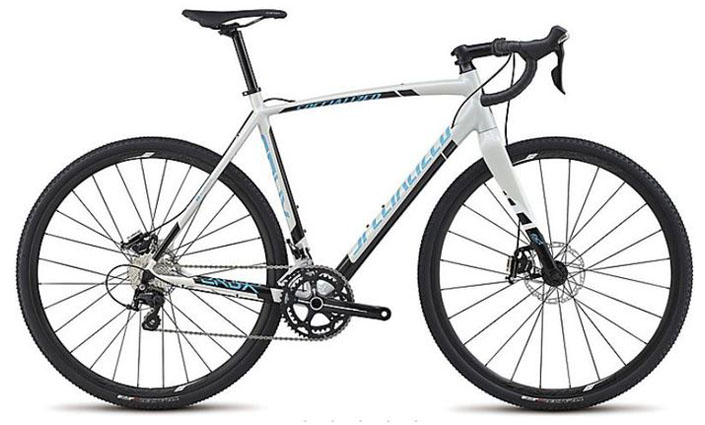 Depending on where you are in the world, the CruX comes standard with either a Shimano 105 or SRAM Apex groupset - either way you're sitting pretty, as this bike is set up nicely to get you through the nastiest terrain out there in style. With its race-optimized geometry, tapered headtube, internal cable routing, and a super-stiff frame, the CruX also boasts CX-specific gearing that provides consistent and reliable shifting in all conditions. It has outstanding stiffness-to-weight ratio to power through the nastiest courses. Fully hydraulic disc brakes offer precise braking performance in the worst 'cross conditions, while Specialized Tracer Sport tires provide the perfect tread to cover any course, with serrated shoulder knobs to adapt to hard or loose terrain. 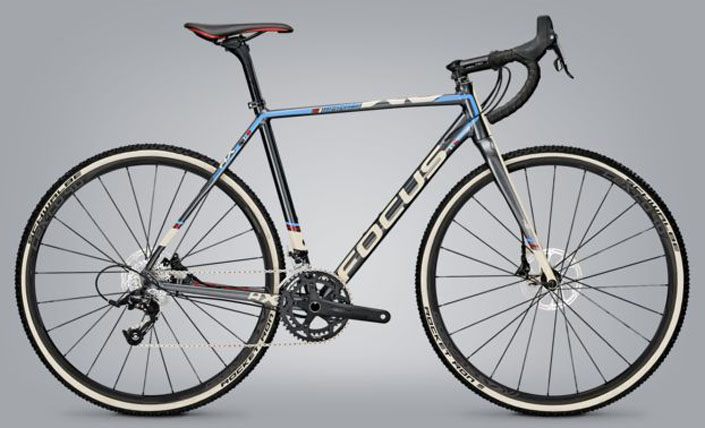 Priding itself on front and rear axles, the new Focus Mares is a beautiful-looking bike. Focus claim that the wheels, with their threaded through-axles (similar to the front axle found on most 29-inch MTBs), are quicker to change than their traditional quick-release skewered counterparts, and if that's true then it's a real breakthrough. Either way, it looks uber-cool. The bike comes with a SRAM Apex groupset and disc brakes, and its triple-butted aluminium frame is paired with a T4 carbon front fork.

Its ride is smooth and stable for a CX bike, and the high bottom bracket and upright fork angle add considerable clearance and control. Overall, a great bike.

RELATED:: Pros and cons of the bike QR and thru axle 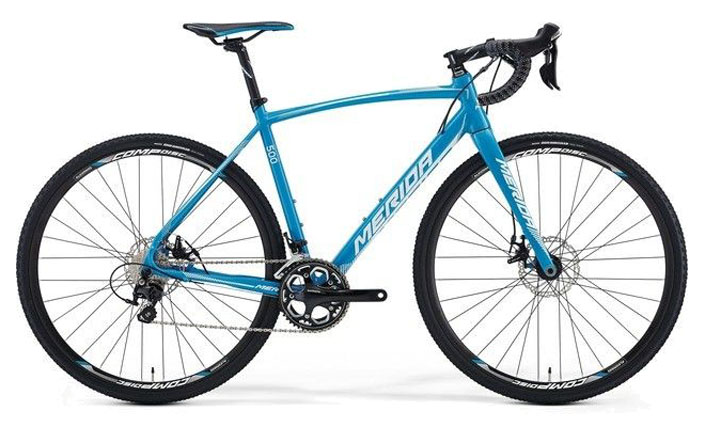 The Taiwanese manufacturer has come up with a great CX bike that is set up for racing but is affordable enough to be an excellent introductory 'Cross bike. It features Shimano cranks set up with 'cross specific 46/36t chainrings, and they're matched up to a Shimano 105 11-speed 11-28t cassette at the rear, which is perhaps the most common ratio setup found on cyclocross bikes today. The frame is well-proportioned and sturdy, and sitting atop it is one of the most comfortable saddles going around, the manufacturer's own Merida Sport 5. The seatpost, stem and handlebars are borrowed from their range of road bikes but are perfectly adequate, and the Maxxis Mud Wrestler 33 tires are gnarly and provide excellent traction. Overall, it's a great bike at a great price. 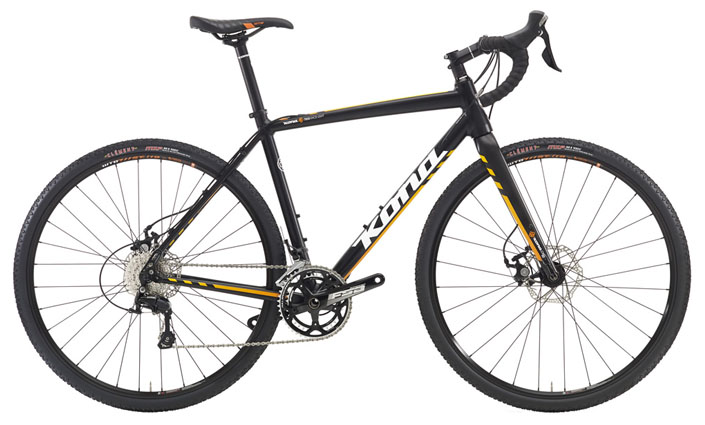 Kona's iconic Jake the Snake is back - its butted 7005-aluminum frame is light, fast, and offers a snappy ride, while engineered seatstays and a tapered full-carbon fork take the sting out of rough terrain. Fitted out with a decent pair of grippy Challenge tyres, the Alex wheels are the only real disappointment this bike offers - for such an otherwise-comprehensive package, the quality of these wheels is a bit of a let-down. However, attached to them is a pair of very effective Hayes disc brakes that let you scrub speed regardless of weather conditions. As usual, the Shimano 105 groupset delivers reliability and smooth shifting - this may be a pretty basic bike but it really delivers in terms of ride, cornering and battling through the rough stuff, and it ticks every CX box except the wheels.

Check out the Comparison
4 of the best entry level cyclocross bikes from Specialized, Focus, Merida, Kona 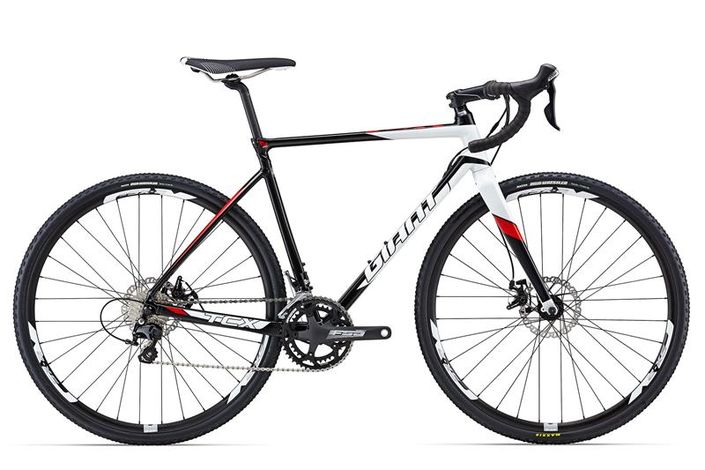 The TCX SLR is a race-ready cyclocross bike featuring an aluminum frame, carbon fibre fork, and Shimano 105 group with mechanical disc brakes. The enormous purchasing power of Giant and the leverage that comes with it means that you get great value for money. The vibration-damping seatpost and carbon fork with Giant's patented OverDrive steerer offers a soft ride (by cyclocross standards) with great control and maneuverability, and Giant's own S-X2 wheels with Maxxis Mud Wrestler tires offer a supple and grippy barrier between you and the trail. As long as you're fine with Giant's generic paintwork, this is probably the best bike in its category - the combination of quality components and competitive pricing make it a hard one to beat.

Check out the Comparison
4 of the best entry level cyclocross bikes from Focus, Merida, Kona, Giant

So there you have it: 5 bikes that could potentially lure you into the muddy but exciting world of cyclocross. Get out there and give them a try - but don't wear your best kit!

RELATED ARTICLE:
Girls in the Dirt - The rise and rise of cyclocross in Australia

Next time your riding plans are thwarted, try not to stress; just accept the fact that you’ve missed out on your ride this time, get on with your day, and try to set aside five minutes to do this kick-ass bodyweight workout instead... READ MORE

RELATED ARTICLE:
What is a Cyclocross Bike?

You've probably heard the term being used around the place, but what exactly is a Cyclocross (CX) bike?

Cyclocross is a massive sport in European countries like Belgium, The Netherlands and France and is growing rapidly in the US as well. Even in my far-flung corner of the world I have begun noticing more and more races popping up... READ MORE