Cyclocross - What makes it so awesome? 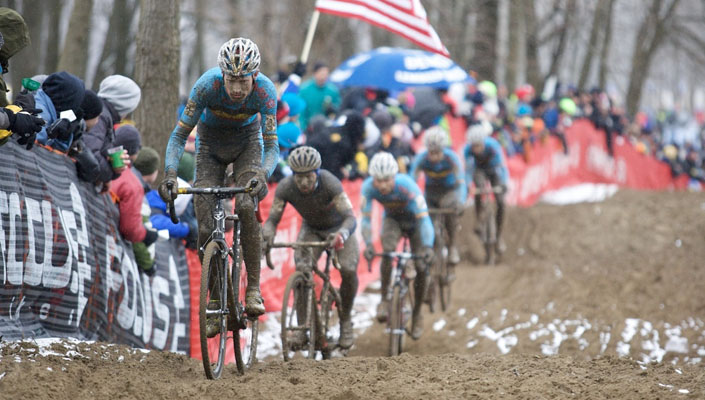 If you have even the slightest interest in cycling then you've probably heard of Cyclocross, the eclectic mix of criterium race, steeplechase, mudbath, and cross-country run. Ask anyone who's ever been in a 'Cross race, or even been to one as a spectator, and it's easy to understand the appeal of a sport that has long been treasured in places such as Belgium and Denmark, but has now firmly established a foothold in the United States, the UK, and Australia.

"It is this wonderful happy environment. Everyone is there to have fun and I don't know anyone that I have talked to that has raced cross and hasn't had a blast," says Lisa Jacobs, three-time Australian national cyclocross champion and the subject of BikeRoar's GIRLS IN THE DIRT story published in June.

Triple U.S. National Champion, Jeremy Powers, says much the same thing. "As cyclocross racers, we pride ourselves on making our races as welcoming as possible for everyone," he says, "regardless of talent or experience. You want to come out here and try to blow some of the pros away? No problem, bring it on. But if you want to come out and have some fun, maybe drink some beer afterwards, and just have an awesome day in the mud, that's cool too. Just as long as you enjoy yourself."

Both Jacobs and Powers raced a few weeks ago at CrossVegas, by far the largest CX event outside Europe. Contested under lights in Las Vegas, the event had over 12,000 pleasantly-unruly fans trackside, and did a great job of showcasing both the level of professionalism that CX has risen to, and just how fan-friendly, popular and accessible it is. 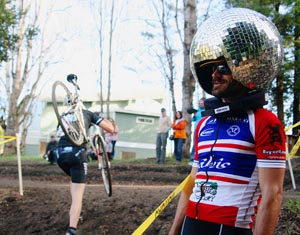 It may be the fastest-growing discipline of cycling in both Australia and the U.S., but one of the appeals of CX is that despite its recent rise in popularity, it's still small and has a festive vibe to it.

It is a sport that appeals to the whole family, as there are often kids and adult races on the same day and the non-racers are quite likely to enjoy the spectacle given there is good race visibility and a convivial atmosphere. It draws in various disciplines from across the cycling community, as it is a middle ground between those who spend their time on the road and those who revel in single-track. The races are generally short, which makes it spectator-friendly: adult races last from between 45 minutes to an hour, and childrens' races can go from 30 minutes for teenagers all the way down to just a few minutes for toddlers on their little balance bikes.

"Everyone gets plenty of crowd support," says Italian pro rider Eva Lechner, who finished second at CrossVegas behind Czech Katerina Nash. "Particularly in America - at the smaller races, the guys coming in last carrying a can of beer over the finish line get louder cheers than the winners! You would never see that at a road race or MTB event." 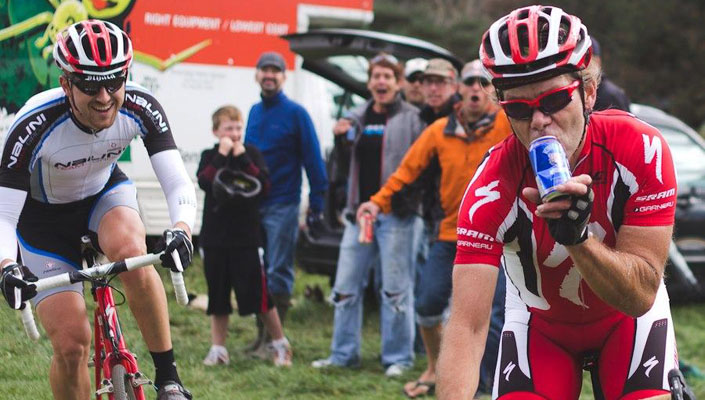 Thinking of giving CX a try? Here's some tips and advice from those in the know:

"Go in with a positive attitude and have a great time. Forget the fear - after 5 minutes nobody can tell who's coming last or first or whatever, and everyone will cheer you anyway."

"Smile! When you smile you ride faster... and get some mud on your face. Your smile looks better with a muddy face."

"CX is the best way to keep fit, have fun and develop your bike skills in the off-season. It smashes your legs and teaches you to corner more efficiently, to attack climbs with power and to maintain composure in a tight bunch. It's the best!"

Tempted to Cyclocross? Here's some more stuff you might want to know... 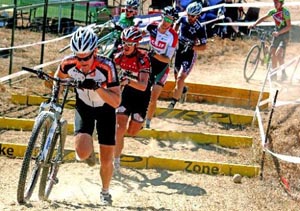 Typical cyclocross courses are 1.5- to 2-mile (2 -3km) loops on a mix of paved and off-road surfaces over flat-to-rolling terrain. Most courses feature short, steep (often muddy) sections, which are nearly impossible to ride. There can be scary cliff-like drop-offs, river crossings and technical singletrack, too. Also, courses include a series of man-made barriers scattered around the course requiring riders to carry their bikes over or, if they're really talented, to jump their bikes over the obstacles. But remember, if any section of the course seems too tough, just get off, pick up your bike and run! Even the most seasoned pros have to carry their bikes sometimes, so don't stress.

While there are plenty of CX-specific bikes on the market, most events have an open class where bikes like hybrids, mountain bikes, and modified road bikes can race - so don't feel that you have to go buy a bike before you even have your first race.

RELATED: What is a Cyclocross Bike?

If you race or ride on the road or on your MTB, your skills and fitness will be improved dramatically over the off-season if you decide to race 'cross. Fun should still be your primary objective, but even without taking it too seriously, your bike handling, power, and general fitness will all improve. Even if you don't usually race, you'll still love the way 'cross improves your skills. Trails that once worried you will seem tame and you'll be able to ride sections you had to walk before.

Another thing that makes it perfect for new racers is that there is very little pressure. There are no real bunches the way there are in road races, so you don't have to worry about getting dropped. Everyone just races at his or her own pace, and nobody minds. The races themselves are short, so you don't need to be in peak condition in order to take part, and they don't take up your whole day the way road races or MTB events can.

Cyclocross (also known as CX or 'cross) is a great way to mix things up on two wheels. Although in many places the traditional winter cyclocross season is over, now is the time to start preparing for the next; whether you're competitive or social, experienced or green, male or female. At a cyclocross event, everyone is equal in the eyes of the course... READ MORE

RELATED ARTICLE:
Gravel Grinder Part 2 of 4. How to turn your bike into a gravel grinder

Make sure your bike is set up to handle the terrain. Here are some ways to convert your road or mountain bike into a gravel grinder... READ MORE