How to choose a safe cycling route 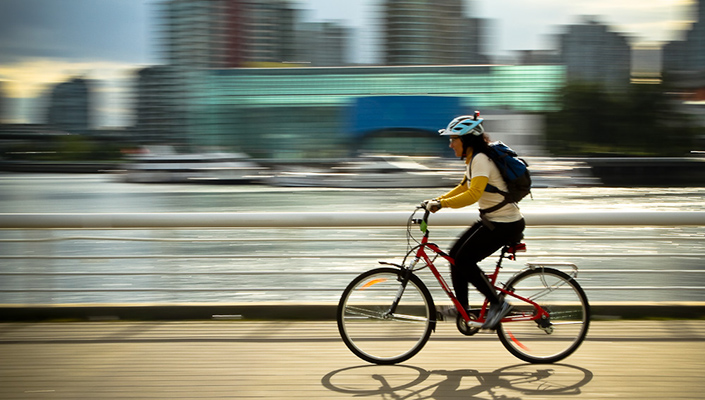 Commuting on your bike can be dangerous without the proper knowledge.
image: Winston Wong | Flickr

Every cyclist has a story to tell about a near miss or collision. You often hear common themes like: "I got hit when a car pulled out right in front of me," or "the worst one I had was being 'car-doored' in the city." Some people get hit on the road more than others - is it just bad luck, or are they making bad decisions that could lead to their demise?

The root cause of an accident could be related to not following road rules, being distracted while riding ('oooh shiny new technological gadgets'), or even a bad choice of cycling route.

What makes a route safe? 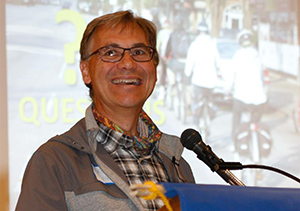 A cycling route is usually safest if it consists of bike paths, dedicated bike lanes, shared paths, and quieter streets. The safest route is usually not the shortest one. Bruce Mol from gonecycling.com has been teaching cycling safety courses since 1994 and training trainers to teach them since 1996. His website provides you with tactics to learn how to enjoy your bicycle commute and stay safe.

Bruce says that 'wide separated routes are safest'. His number one tip for new bike commuters is to try your route with a more experienced bicycling commuting friend on the weekend, so you know the way and can deal with traffic as a separate issue.

Ensure you understand what the different 'bike markings' and signs mean on the roads and paths. Even though it may be a designated bike route, it might not mean it is for cyclists only. It could be a shared zone for bikes and cars. For example, sharrows: 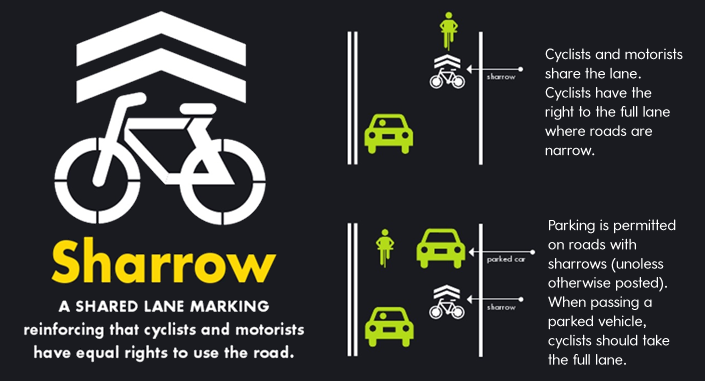 Sharrows are being laid down everywhere, but do you know what they mean?
image: ajax.ca

How can you find a safe route?

Check out the websites of your local government or bicycling advocacy group. Some websites have a route planner where it identifies the 'safest' route, shows you where all the bike paths are, how they link together, and how they link with other public transportation - all to help you get to your destination. Check out the online route planning tool Cycling Brisbane put together.

Google Maps can also help you out, but the quality of the data depends on whether the 'bicycling layer' has been updated in your area. Select the bicycling option from the traffic dropdown list. The 'bicycling layer' includes trails, dedicated lanes, bicycle friendly roads, and dirt/unpaved trails. So, it's easy for you to plan the safest route using bike paths and bike lanes.

RELATED: Do cyclists ride in the middle of the road simply to annoy motorists?

Bruce is also involved in an organization called the North Okanagan Coalition for Active Transportation (NOCAT). Part of the NOCAT vision is to have a transportation system that prioritizes bicycling and walking. They help by identifying cycling and walking corridors that link neighborhoods with schools, workplaces, recreation sites, and businesses.

There are quite a few organizations like this who help the general cycling population with better, safer cycling route choices, and help integrate cycling paths and routes into new road suburb designs. You're likely to have some in your area that can help you; do an internet search or check on your local government's website.

What makes a person more susceptible to accidents with cars?

Bruce says, "The people with the 'close call' bicycling collisions often don't know how to handle themselves, their equipment, or timing". 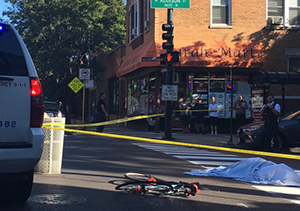 Additional steps a rider can take to mitigate risks

Unfortunately, there is rarely a perfect bike route that is remote from cars. There are often places that you know are dangerous (where drivers do the riskiest moves or are unpredictable), so be cautious and extra alert of the danger areas on your route.

I know this well. There's one unavoidable road on my bike commute which gives me the ensemble of backed up traffic, buses, parked cars who open doors suddenly or pull out of car parks, and areas where cars overtake cyclists then pull into side streets, cutting the riders off. It is actually a 'marked bicycling route' which links two main bike commuting paths.

Having the safest route planned doesn't mean you can snooze on your commute or leisure ride. Even experienced riders are exposed and vulnerable on roads and risk serious injury or death if involved in a crash. Here are some additional steps a rider can take to mitigate risks.

1) Follow road rules and be in a good position on the road. 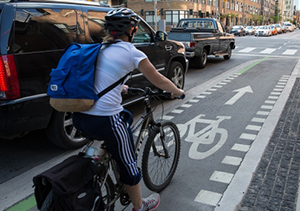 Safest place to be is usually the bike lane.
image: cbc.ca

There will always be a debate about cyclists and road etiquette, but the best thing to do is to follow the road rules! Check your local jurisdiction as the rules differ between countries and states. Even though you have the 'right' to do certain things on the bike (e.g., pass cars at an intersection when they are parked waiting for the lights to turn green), it may not always be the best thing to do. Sometimes it is courteous to avoid jumping the queue to the front of the line and holding up traffic when it begins moving. Avoid being rude and keep the peace with cars. Stay back from the intersection and when the lights change, merge safely with traffic at your place in the queue.

Keep to your side of the road, but stay out of the curb. If you are too close to the curb, then you give cars a false sense they can squeeze past you. If the road is too narrow for cars to pass you safely, then move over and take the whole lane so cars can't get too close or squeeze you into the curb.

Make sure to pass parked cars with enough room to avoid the 'door zone' - stay out of this dangerous area to avoid getting hit, or 'doored', from car doors swinging open, often randomly.

Bruce says, "Learn to recognize, and therefore avoid situations which may cause you to swerve into traffic - a parked car driver's door opening and road debris are two common causes."

2) Be predictable, aware, and visible.

My number one tip is 'be predictable'. If you ride in the manner that cars expect you to, then they are better prepared for what you intend to do. Bruce agrees, "by being predictable you are communicating to other road user users. If they have observed you, then they can make assumptions about your intended line of travel."

Other road users must also be able to see you, so wear bright colors, use lights and reflectors, and use road positions that aid visibility. Another way to be visible is to make eye contact with drivers. Let them know that you see them, and check that they have seen you. Use your hands to indicate direction as per the road rules.

You might not mind riding in the rain, but be aware that when it's wet it's more difficult for drivers to see you through wet windshields. Light yourself up like a Christmas tree. Be aware of everything! Look for signs that motorists and pedestrians haven't seen you; look for reversing lights or turning tires of parked cars. Be prepared, anticipate accidents, and be ready to brake suddenly.

RELATED: How can I stay safe cycling in the wet?

3) Use distracting technology at your own risk 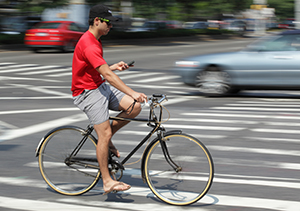 Technology is putting us at risk by taking our eyes and attention off the road. | image: 1310news.com

These days there seems to be a lot more gadgets to distract cyclists - Strava, GoPro cameras, GPS units, phones linked to bike computers - and also gadgets to distract drivers - radios, GPS units, phones. It seems like a recipe for disaster with multiple distractions on both sides. Rather than avoiding the use of all technology, how can cyclists avoid being distracted from their cool gadgets while riding?

Bruce agrees that these distractions can be quite dangerous from a sensory input point of view. Cyclists and drivers are not being aware of their surroundings. Simply be aware that the gadgets are distracting and use them sensibly. After all, it is illegal to drive and use a mobile phone due to the potential hazard.

RELATED: Mother dies from bike crash moments after taking this smiling selfie on her way home

Sadly, there are instances of deaths associated with using Strava. The most talked about are: Kim Flint, who was involved in a tragic accident in 2010; he was fatally injured when he suddenly braked to avoid a car and his bike flipped over. He was trying to reclaim his Strava King of the Mountain (KOM). In 2013, a cyclist skipped two stop signs and raced to get through a red light when he plowed into 71-year-old man who was walking in a crosswalk with his wife. And in 2014, an avid Strava user hit a pedestrian in New York's Central Park; the pedestrian died four days later from her injuries.

So, fellow cyclists, check out the maps of your local area and evaluate your current cycling routes for safety. You may find a safer route and discover new things! Understand what makes routes safer and ensure you take additional steps to mitigate risks. Be alert and avoid distractions. Be safe.

no matter if your commuting or going out for a road ride, the streets can be a dangerous place to bike

BikeRoar brings you our tips on how you can stay safe... READ MORE

You love cycling but your family is on the fence?

BikeRoar gives you get ideas on how to help your family enjoy... READ MORE