ZIPP hubs and quick release skewers on recall by SRAM 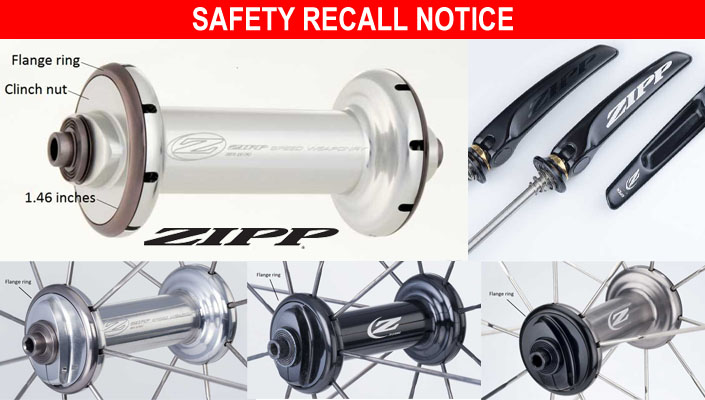 The hub recall is for several editions of ZIPP 88 aluminum front hubs of which flange failure can lead to wheel collapse. This recall is an extension of a February 2015 recall spurred by the same issue in first edition hub models. The models of hubs affected by this recall are ZIPP 88v6, 88v7, and 88v8. The hubs come in black, silver and falcon grey, and have a printed Z logo. The diameter of the clinch nut is approximately 1.46 inches. Some of the hubs were sold as part of wheel sets installed on new bicycles. SRAM will post a list of affected bicycle brands and models on its website.

The SRAM ZIPP QR recall involves ZIPP stainless steel or titanium quick releases that can fail to engage in the closed position and pose crash and injury hazards to riders.

Quick release skewers were sold as aftermarket components or as part of the 202 DB V2, 303 DB V2, 404 Firestrike V2, 202 Firecrest V3, 303 Firecrest V3, 404 Firecrest V3, 808 Firecrest V3 or 808 NSW wheel sets. The quick release has a curved, black lever and 'ZIPP' appears on the lever. Only quick releases without a marking at the center of the underside of the lever, below the ZIPP logo, are included on the recall.

Consumers should immediately stop using any bicycles equipped with the recalled quick releases and contact SRAM or their local bicycle shop for a free replacement quick release.

Upgrading to aerodynamic wheels is the most effective, and definitely the most popular, way to improve the performance of your bike. You're not just reducing the weight of your bike, but you're also benefiting from a lower rolling resistance and better aerodynamics. But it's not all champagne and cheese... READ MORE

RELATED ARTICLE:
Pros and cons of the bike QR and thru axle

Here at BikeRoar we all agree that kids should learn how to ride a bike. A main reason being that cycling is simply the best kind of exercise we know – and definitely the best you can do in skin tight clothes (sorry, ballet fans)... READ MORE