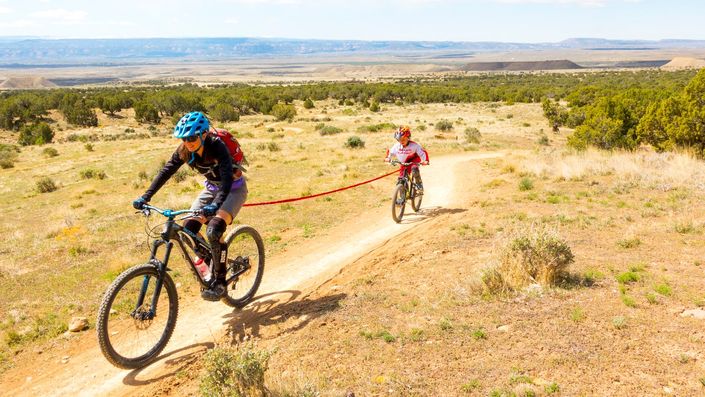 One of the beauties of cycling is that it can be a great family activity; despite differences in age, ability and experience, everyone can enjoy a great time on their bike. The only drawback seems to be that the smaller family members get tired out rather quickly, and either miss out on some of the fun or slow down the rest of the tribe.

There have been a number of attempts to solve this issue by inventing or redesigning various methods of towing a small bike with a big bike. These range from tow-along trailers, to rigid aluminum tow-hitches, to kids’ bikes with only a rear wheel and a tow bar on the front (a.k.a. tag-alongs or trail-along bikes) that attach directly onto an adult bike in front.

Those solved the towing problem — well, kind of, anyway — but created new problems along the way.

A kid sitting in a trailer is not really going for a bike ride; he or she is just sitting on a moving couch. Not the same thing at all.

Kids’ bikes with no front wheel get them pedaling, but are completely useless when they’re NOT being towed. Ideally, towing systems are there to lend a hand when kids get tired or have to tackle a hill that’s just too long or steep for their little legs to handle. The idea of towing them around all the time doesn’t sit well with parents, nor does it make much sense. How do you teach a kid to ride when their bike doesn’t even have a front wheel? And what happens when they do actually learn to ride? You have to buy them yet another bike...

Rigid towing systems, such as the Trail-Gator, work pretty well, but still have a number of drawbacks. While they can be removed and re-attached when necessary, it’s neither a simple process nor a quick one. Brackets need to be attached to both bikes in order to accommodate the tow bar, and when it’s not being used it needs to be carried somehow – usually in an oversized backpack. They're also not usually designed for off-road use.

Upon first hearing about the TowWhee, my initial reaction was “OK, it’s a tow rope. I can buy rope from my local hardware store for $5 and use that, so what’s the big deal?”

Despite its relative simplicity, lots of thought, consideration, and research has gone into developing the exact specifications of the TowWhee.

It is 58 inches (147cm) long with no tension on it and extends out to a maximum of 180 inches (457cm), and weighs less than 5 ounces. The genius of the interior bungee cord is its soft progressive pull and the gentle way it bottoms out when it reaches its maximum extension. Compare this to a length of regular store-bought rope: upon accelerating to take up any slack in the rope, it snaps tight and will cause a noticeable jerk on the bike being towed. Assuming you manage to get moving, imagine your little rider hitting the brakes. Kids are unpredictable, as every parent knows, and they love seeing the reaction they get by doing crazy stuff. Any sudden braking when being towed by a regular rope will result in a dislodged parent, a broken rope, an injured kid, or all three.

I had a willing 4-year-old accomplice on my first test ride with the TowWhee. As predicted, he slammed on the brakes soon after reaching top speed, causing the bungee to extend to its maximum length. To my pleasant surprise, and his indignation, there were no ill effects and no crash, just a gentle tug on the belt around my waist as the TowWhee bottomed out. 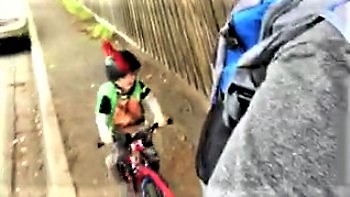 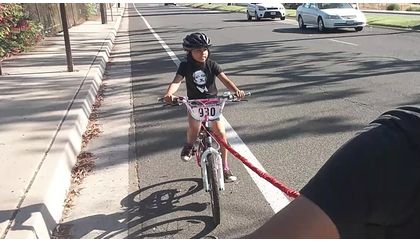 Accelerating proved to be as gentle as braking. Making sure my little guy was ready to roll, I began riding at a nice steady pace – the TowWhee extended agreeably, then began to pull him along. The best comparison that springs to mind is the reassuring push at the back of the saddle that most parents have given their child at one time or another to get them and their bike moving.

The length of the TowWhee proved to be as important as its towing capabilities. When contracted it is short enough to avoid becoming tangled in the wheels or spokes of either bike, and when extended at full length it is long enough to clearly see any obstacles on the trail in plenty of time to avoid them.

I also used it in an urban setting, riding along the footpath and crossing the road via the lights at various intersections. Again, the length was perfect - my young charge was close enough to keep an eye on and issue instructions to, but not so close he was colliding with my rear wheel. When navigating around pedestrians, traffic lights and other street furniture, the bungee was short enough to make sharp turns without the rope clipping poles, posts, or trash cans. 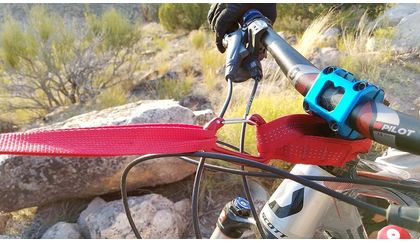 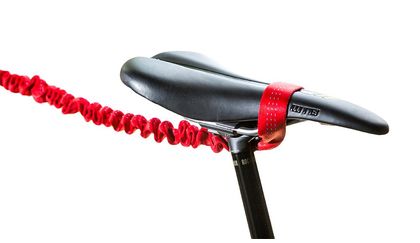 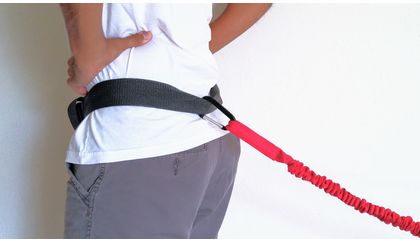 Attachment is via a loop around the steerer tube on the rear bike, and there are two options for the front bike: either a simple loop around the seatpost or saddle, or a webbing belt that loops around the rider’s waist.

Despite sounding slightly uncomfortable, I found the belt to be the better choice for a number of reasons. Firstly, it eliminates any chance of tangling the bungee cord around the seatpost. Secondly, it allows the rider to feel the tension – or lack thereof – through the bungee cord, which in turn makes it easier to make adjustments in speed. Finally, it makes it much easier and quicker to remove the TowWhee, and to reattach it. (The belt supplied for our test was a 2" black nylon with double D-rings; TowWhee reports a lighter, softer, and more comfortable belt is now being included.) 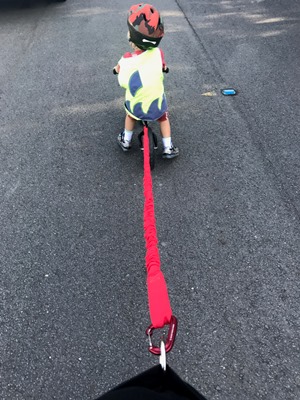 Using TowWhee in reverse on the downhill.
photo: Jayne Rutter

TowWhee was originally designed for towing kids up hills; in theory, once they get to the top they can unhook and ride down under their own steam. In an environment where there are lots of short steep hills interspersed with flat roads or trails and downhill sections, the speed and convenience with which the TowWhee can be unhooked and reattached is crucial. I found that after using it for a week or two, I could do either in a quick minute or less.

TowWhee also works in reverse - as a braking device on the downhills. With your child up front, you can regulate their speed and help them keep in control as they build their skills to maneuver and brake on their own. Once again, we found using the belt a better choice; we simply moved the TowWhee from the child's bike stem to the seatpost, and slid the carabiner on the belt to our front. We also gave it a try while running instead of riding, and it worked just as well.

Because your child has wonderful freedom to pedal and move about, it's important to talk about what to expect and how your child should handle his or herself. Communication is key, especially when getting going or coming to a stop. It takes only a little time to learn, and throughout our tests, on and off-road, we TowWheed without any problems, crashes, or crying — all smiles.

TowWhee really does tick all the boxes. It works perfectly, it’s easy and simple to use, and it’s light and easily transported when not in use. After getting accustomed to it, I quickly got into the habit of stashing it into my backpack or, if I knew I would need it again quickly, just looping it over my shoulder a few times. Adding a second carabiner to the mix of already included straps made it even easier to rapidly connect and disconnect at both ends. 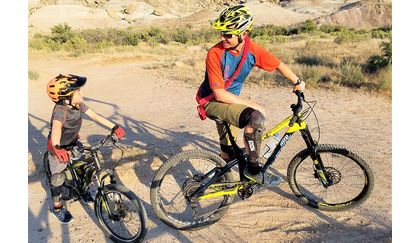 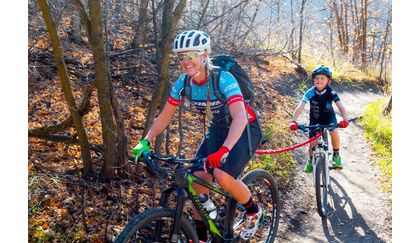 Easy to use and everyone has fun on their bikes.
photo: TowWhee

The product's creator, Eric Landis, continues to refine TowWhee as more uses for it are explored and features requested. He tells us an adult version (longer and with a higher tension bungee) is coming soon, and he's added a chest harness "perfect to help children learn to ski downhill or to stay with you on a cross country uphill." As we tested our TowWhee on the trails, several adults could be heard telling their ride mates, "I need one of those!"

TowWhee has quickly gone from being an item of pure convenience to one of freedom and shared excitement; no longer limited by the endurance or power of 4-year-old legs, we can now explore trails and travel to places that were effectively out of bounds a month ago.

Having a family than doesn't enjoy cycling can be tough. BikeRoar gives you some great ideas on how to help your family share your love of cycling... READ MORE

RELATED ARTICLE:
10 reasons to get your kids on a bike

Cycling encourages a healthy, involved lifestyle. Start them early and have some fun! READ MORE