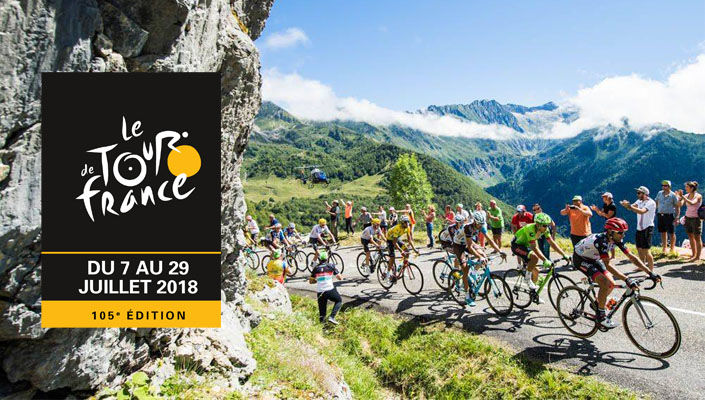 The 105th edition of the Tour de France sets off on Saturday July 7 from l'île de Noirmoutier, a small island off the Atlantic coast of France. For cycling fans the world over it’s the most engaging three weeks of the year, and the 2018 edition of the great race looks to be one of the most compelling in recent history. The route is an intriguing one; it takes in everything that makes cycling such an exciting sport, with cobblestones, punchy arrivals, plenty of bunch sprints, dust roads, high mountains, an explosive 65-kilometer stage through the Pyrenees, a hilly time trial on the penultimate day – and more. 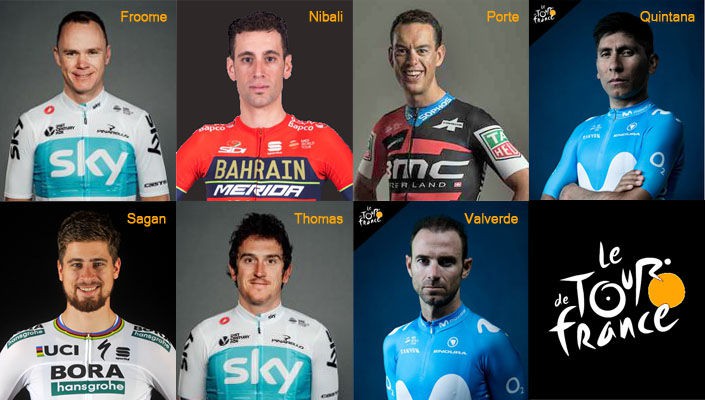 The terrain is one part of the equation; the riders who tackle it are the other. This year the main focus will be on a handful of the favorites: Richie Porte, Alejandro Valverde, Nairo Quintana, Vincenzo Nibali, megastar sprinter Peter Sagan, and four-time champion Chris Froome.

As we've closed in on the race's start date, Team Sky’s Froome has been insisting with rising emphasis he will be on the start line in an attempt to gain a record-equalling fifth victory. When asked by Sky Sports if he would start the Tour de France, Froome replied, “I have done nothing wrong here. I have every right to be racing." This is despite having returned an adverse analytical finding for excessive levels of the asthma drug Salbutamol en route to victory at La Vuelta last year. As Salbutamol is a specified substance and not a banned one, Froome — who has faithfully protested his innocence — had been free to continue racing while the drawn-out case continued, and last month won the Giro d’Italia to hold all three Grand Tour titles at the same time.

“
"I have done nothing wrong here. I have every right to be racing."

Over the weekend, Froome's steadfastness and the absense of forestalling by the UCI met a new challenge; ASO, the Tour de France organization, had blocked Team Sky’s registration of Froome, citing its own rules to protect "the image or reputation of ASO or those of the event." Team Sky immediately appealed ASO's decision to the French Olympic Committee (CNOSF), which was set to arbitrate the case this week, but in a surprising decision this morning, UCI announced it has cleared Froome of doping. ASO now says there is no reason to prevent Froome's participation and Tour director Christian Prudhomme told L'Equipe newspaper that Froome would be on the starting line on Saturday. 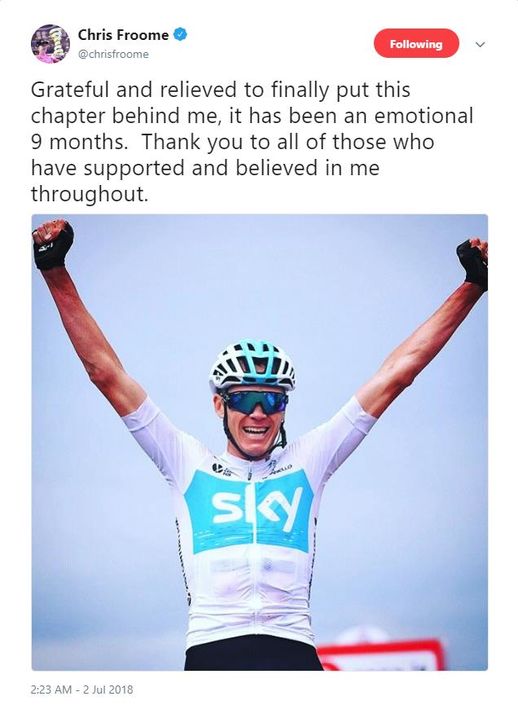 Froome's situation was expected to cause controversy, racing or not. Had he decided not to start, some would have seen it as a tacit admission of guilt, and starting without being cleared by UCI would have been under a cloud of mistrust and bad blood (pardon the pun). The UCI's decision carries its own controversy; Froome can race and may manage to win – which is reasonably likely – but rabid French supporters may still be calling for his head by the time he rolls into Paris on July 29.

Enhanced or not, Froome’s performances in recent years have been unparalleled, and if he makes it to the start line he’ll be an odds-on favorite.

Without the history and drama, but in equally good form, is team BMC’s Australian Richie Porte. Fresh off a win at the Tour de Suisse two weeks ago, he’s ready to go into battle against friend and former teammate Froome, and is keen to make amends for his 2017 TdF campaign which saw him break his collarbone and shatter his pelvis in a horrific 72 km/h crash. 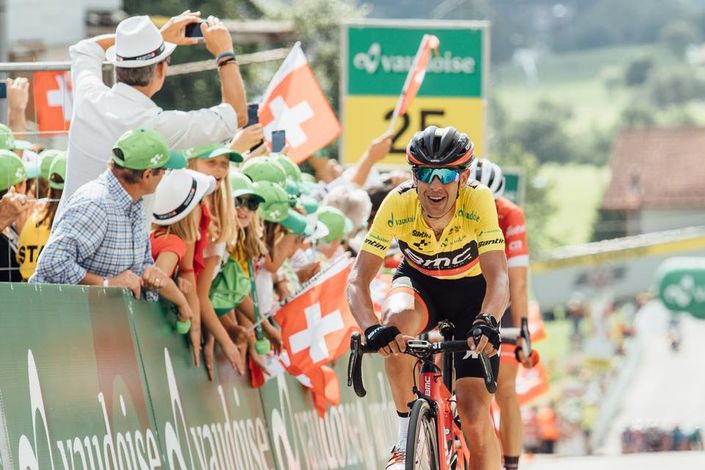 Team Movistar will head into the race yielding a three-pronged attack thanks to Nairo Quintana, Mikel Landa, and Alejandro Valverde. The latter’s win at the Route d’Occitanie a couple of weeks ago proves that his form is as good as Quintana’s right now, and despite being 38 years old, it looks as though the Spanish veteran may roll from the start line as the official team leader with the rest of the squad working for him.

Despite finishing a disappointing 27th in the Critérium du Dauphiné three weeks ago, Bahrain-Merida’s perennial leader Vincenzo Nibali can never be written off in a Grand Tour, particularly as the 2014 winner has declared that this will be his final Tour de France. His fearless descending, matched only by Peter Sagan, will see him gain an advantage over some of his main rivals as the race hits the mountains after the first ten days. 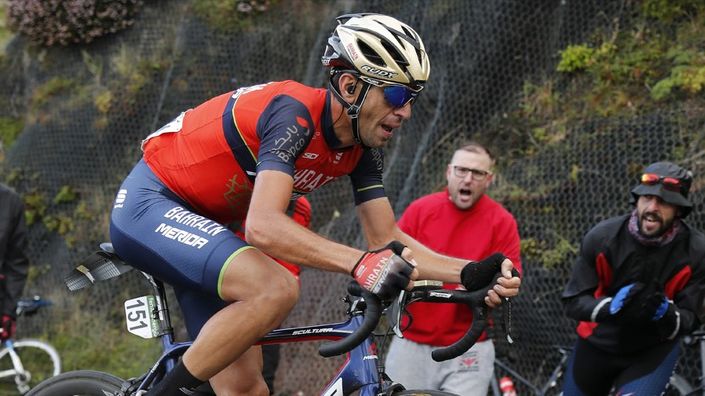 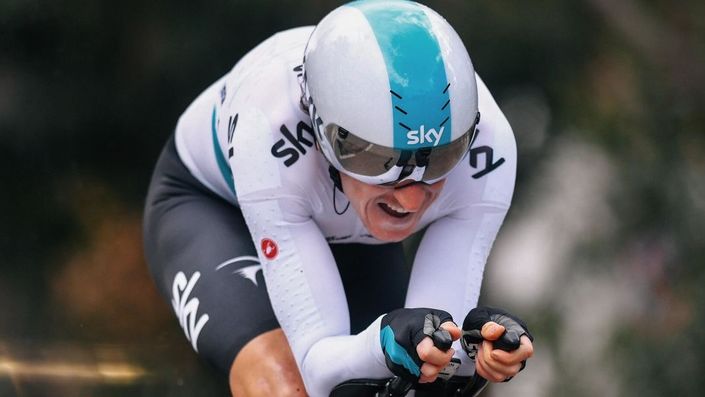 If Nibali struggled at the Dauphine, it was exactly the opposite for Welshman Geraint Thomas; the Team Sky rider was both dominant and consistent to take a well-deserved win, and is fully capable of grabbing the Tour by the horns if his team leader Froome fails to front up.

BikeRoar Prediction: Porte gets the nod slightly ahead of Froome. If you’re a gambler, your best bets are Alejandro Valverde at 18/1 or Primoz Roglic (LottoNL-Jumbo) at 26/1. 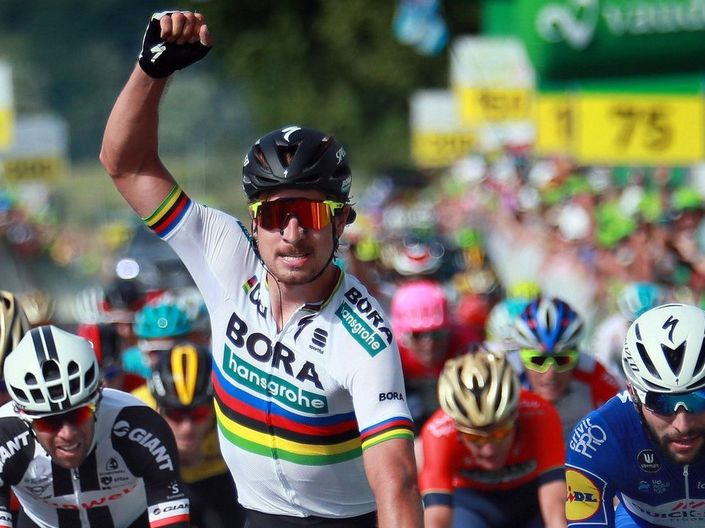 Last year we said that only a natural disaster would prevent World Champion Peter Sagan from winning a record-equally sixth Green Jersey, traditionally awarded to the race’s best sprinter. He was controversially ejected from the race after he forced fellow fast man Mark Cavendish into the barriers during the bunch sprint at the end of stage four. We’ll say it again: Sagan is too classy, too clever, too versatile and too aggressive for anyone to beat him in 2018.

Suprisingly, young sprinter Caleb Ewan was left off the Mitchelton-Scott race roster after the team had indicated at season's start he would make his Tour debut. In spite of his few wins this year, we expected Ewan to bring great energy and were looking forward to him spicing up the drag races to the line. 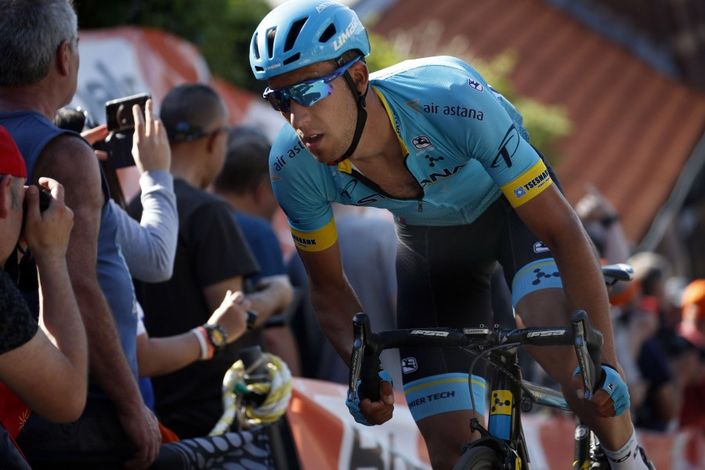 Movistar’s Mikel Landa is quite capable of winning a second climber’s polka-dot jersey, but at this stage seems focused on the General Classification and a potential overall win, either for himself of Alejandro Valverde. That leaves last year’s winner, Warren Barguil, riding this year for Fortuneo-Samsic, and Astana’s Omar Fraile, who has won the equivalent title at the Vuelta Espana in 2015 and 2016.

RELATED: How to become a better climber 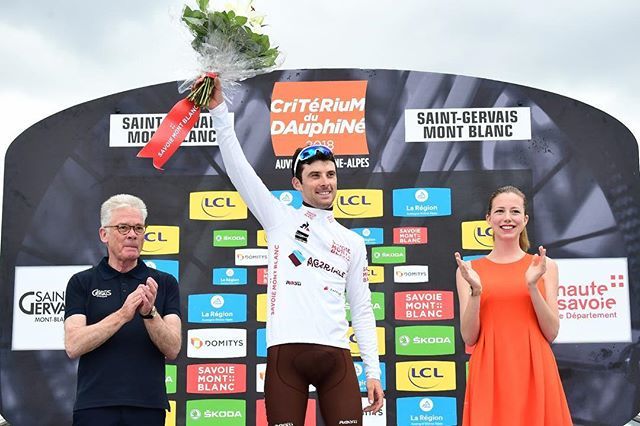 Simon Yates of Mitchelton-Scott took home the Young Rider’s White Jersey last year, as well as seventh place overall. This year, watch out for Pierre Latour from AG2R La Mondiale, who won Critérium du Dauphiné's white jersey and was 7th overall. We had Astana’s Angel Lopez Miguel as a young-gun to watch for, having won the Giro's best young rider honor and finishing 3rd overall, but Astana has opted to leave him off their 8-man roster, likely to allow him to get rested for racing rest of the year.

RELATED: 10 reasons to get your kids on a bike

Where the race will be won and lost

The battles between the riders and their teams will be all the more intriguing this year, as the race organizers have provided a very interesting layout indeed. Stages one and two, then four through eight, are essentially flat and will virtually guarantee two things: some exciting sprint finishes and the fact that all the main General Classification threats will still be within striking distance of each other. 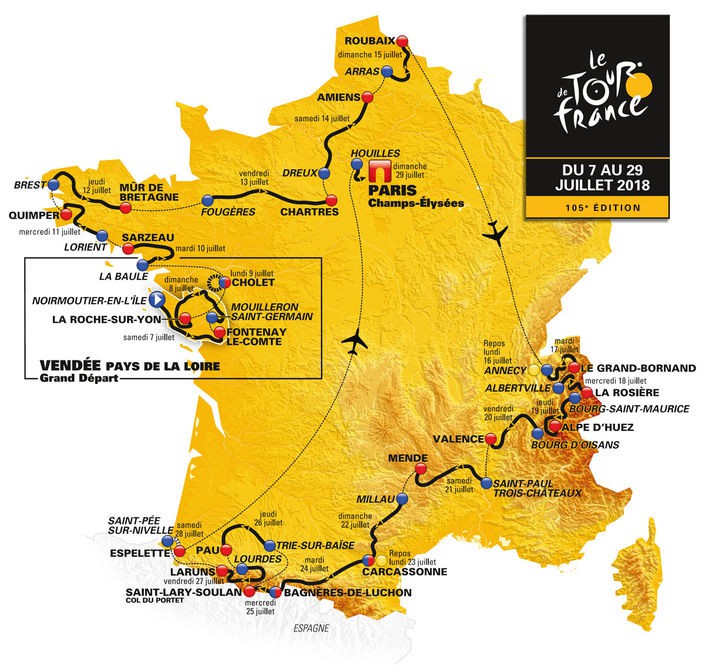 Stage three sees the reintroduction of most spectators’ favorite event, the team time trial. Look for Team Sky, Movistar, and Mitchelton-Scott to dominate.

Following a rest after day nine, the race hits the Alps and the climbers and strong men will get to show their true form. Expect Porte and Froome to set the pace, along with Nibali, and perhaps last year’s runner-up, Rigoberto Urán from the team with the ridiculously long name, EF Education First–Drapac p/b Cannondale.

The Pyrenees loom on stages 16 and 17, departing from Bagnères-de-Luchon and finishing atop the Col de Portet, promises to be one of the most fascinating in Tour history. Only 65 km in length, the stage start has been granted an exemption under Article 17 of the race rules from having the regular “neutral zone” where riders set off at something of a leisurely pace then start racing in earnest when the white flag is waved some 5 to 10 kilometers after the start line. Instead, it’s full-gas racing from kilometer zero, and the start line will feature a starting grid similar to a Formula One car race. “At kilometer zero, riders shall be positioned in the same order as the general classification after the previous stage,” reads Article 17.

Get ready for absolute chaos – or who knows, maybe it will go surprisingly smoothly. Either way, the real interest lies in whether the race leaders attack from the beginning and try to claim a solo victory, or play it safe and wait for their domestiques to catch them up and help them mount a concerted team attack.

The penultimate day sees a hilly 31 km individual time trial – tough enough to offer an advantage to TT specialists Froome, Porte, Uran, and world ITT champion Tom Dumoulin, but not so long that a pure climber will get blown completely away. 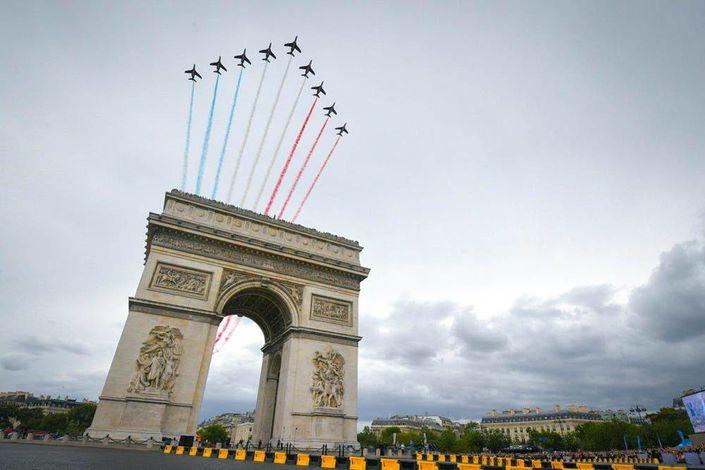 As always, the final day of the Tour is a purely ceremonial pedal down the Champs Elysees before the sprinters get one last chance to show off their horsepower. It’s the best three weeks of the year, so strap in and enjoy the ride! 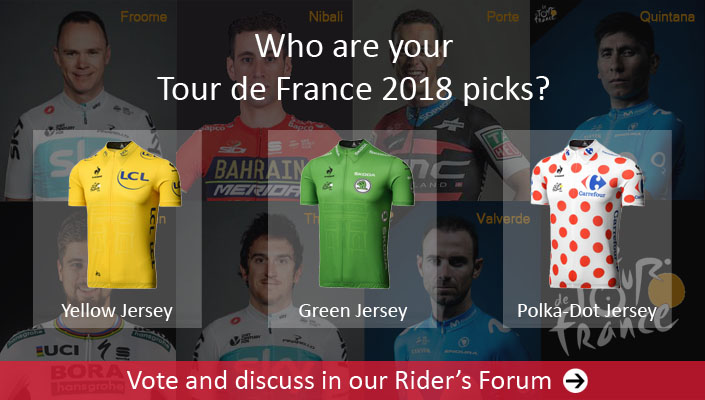 Le Tour is cycling's grandest spectacle, but not the longest, or tallest, or cleanest. Explore some hidden facts behind the bike race's glamorous façade... READ MORE