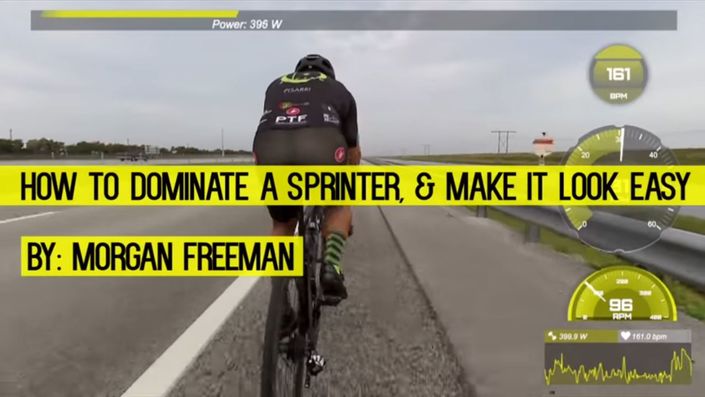 How do Morgan Freeman, George Bush, and Charles Barkley end up narrating a cycling video?

This video of a cycling sprinter competition breakdown has been all over social media, racking up over 1,000 shares, 135,000 views, and many laughs and some controversy on Facebook. We contacted the creator to find out the story behind the video.

First, here it is, in case you missed it:

The video's creator is Brian Pace, the same guy who you see winning the final sprint. We reached out to Brian looking to answer how he got the celebrity voices and about the inspiration and technical merits of his video breakdown. We got those answers as well as a story that takes us from cycling to table tennis, and from comedians to critics.

A cyclist, obviously, Brian is also the head coach of the biggest table tennis facility in North America, Triangle Table Tennis Center in Raleigh, North Carolina. A former pro table tennis player, Brian got into cycling when he was invited to live at the Olympic Training Center and told to pick a cross-training sport. He chose cycling, and was soon off racking up 100 miles a week. Brian went on to play table tennis in college and spent three years as a pro in Romania. He retired as a player after the 2004 Olympic Trials, taking up coaching and establishing his Dynamic Table Tennis video training system.

As happens to many high-level atheletes when they retire, start 'regular' work, and get married and have kids, Brian slowed down and packed on more than a few pounds of extra weight. Realizing the impact to his health and happiness, Brian set a goal for himself to drop the weight and decided to take up cycling again to make it happen. 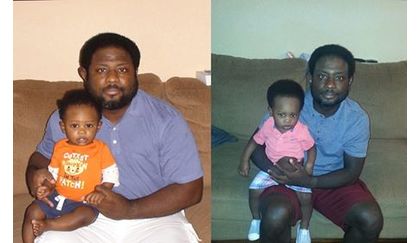 With his pro athlete discipline and drive, Brian started riding his bike twice a day, in the mornings before work and in the evenings after, day after day, shedding 70 pounds in five months. He joined group rides, initially suffering and getting dropped, but all the while learning and getting faster. Brian developed from a bicycle rider into a racing cyclist, joined a local club, and grew to be a contender for local groups rides and races.

The original video for "Sprintification" was first captured a year ago, back when Brian was living outside of Fort Lauderdale, Florida. He'd been taking photos and video of his weight loss and cycling progress, sharing them on his social media with the goal of inspiring others while remaining humble. Brian points out, "I've been showing all my wins and losses along the way, no shame." True to that, his Facebook cover photo is of him almost winning a local race, only to be nipped at the line because of his premature celebration.

Where most see fun and entertainment, others do not. "Last year, when I shared a different version of this video, I got some negative response from the guys I compete against and it even resulted in me getting kicked off my team." Brian refined the video (ultimately having created seven versions), but it's this "anniversary edition", as he calls it, that made it go viral, with many social media commenters wondering about the celebrity voices and commending the tactical breakdown. 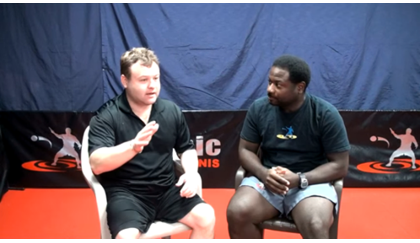 The "voices" of Morgan Freeman, George Bush, and Charles Barkley are actually the work of Frank Caliendo, comedian, actor, and impressionist. Brian explained that Caliendo is an avid table tennis player and that's how he and Brian met. After being shown the video, Caliendo offered to do the humorous voice over, so Brian sent a script and traded some table tennis coaching, then got to work on the video.

As to the social media commenters and his technical analysis, Brian says, "I have engaged in the dialogue mostly consisting of [people saying] they are going to count pedal strokes, try this type of approach on their friends, or the fact that they are going to be looking for Tour de France riders to fall victim to the 'Sprintification.'" 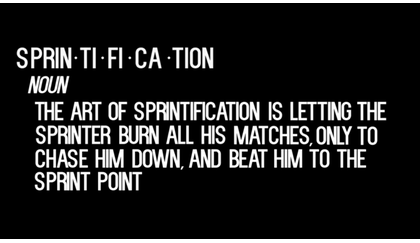 We contacted renowned sprinter and 10-time U.S. National Champion Rahsaan Bahati, to ask his opinion of the video breakdown and if "Sprintification" is really a thing. After first agreeing that it's funny overall, Bahati, who is also a cycling coach, says Brian's analysis has some merits. The competitor certainly did "burn some unnecessary matches" by trying to shake Brian off his wheel several miles out, and he also agreed it's smart to give space to the sprinter, not sucking his wheel for draft. However, Bahati doesn't think a look back is necessarily a sign of weakness, and says he does not find it practical to count pedal strokes, especially in the heat of a 'real' race. We think that if you're counting pedal strokes, you might not be going fast enough, but we agreed with Bahati that knowing the limits of your competition helps you in developing your overall tactics.

RELATED: Sprint like you stole it: How to master sprint training

Brian explains that "Sprintification" is simply another record of his journey and a combination of his video skills and his studied approach to video analysis that he used heavily as a pro table tennis player. "I want to entertain, educate, and inspire," he said. This video wasn't meant to bring anyone down, but to mark a milestone in his personal development. "I'm really only in competition with myself."

We look at ways to become more explosive and how we can ensure this power translates into our pedals... READ MORE