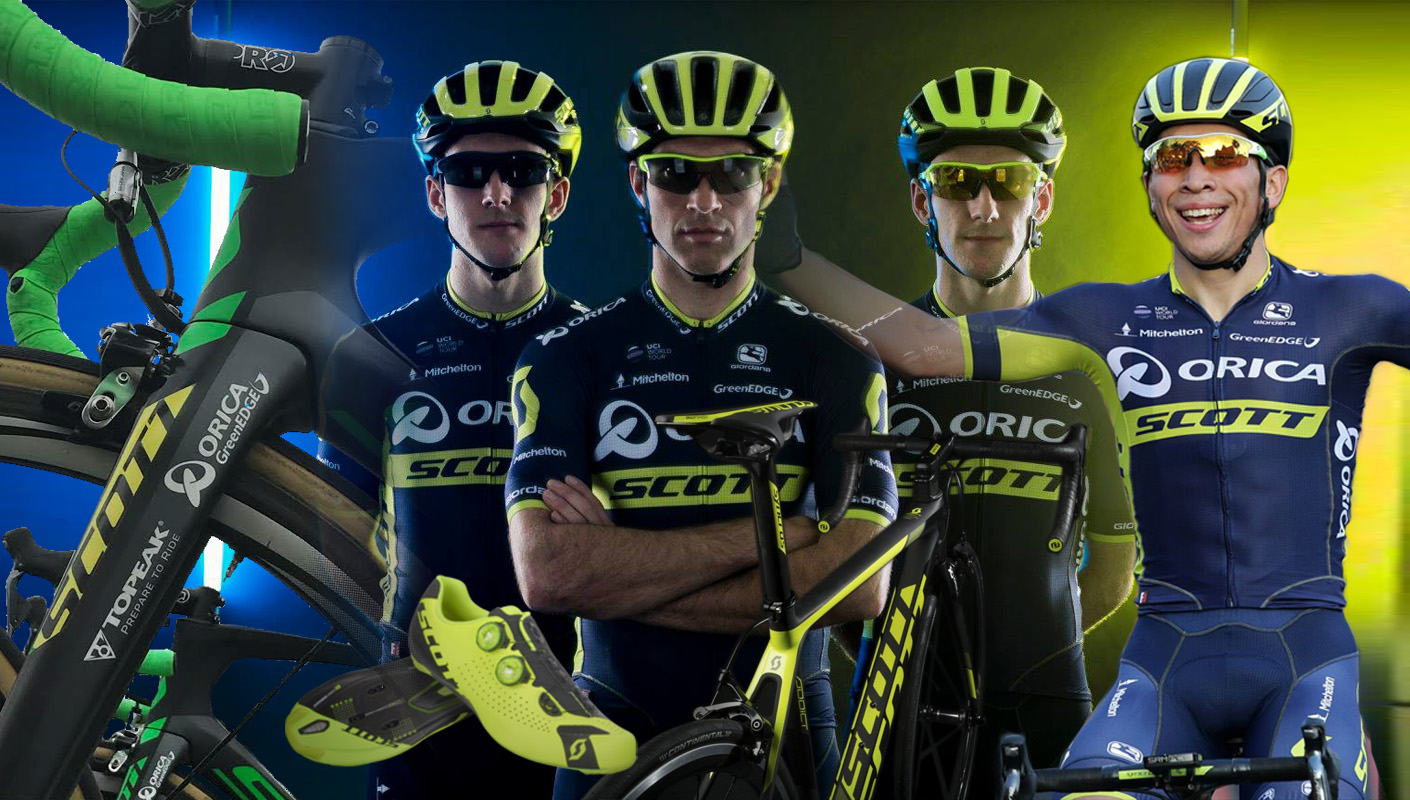 With a new co-naming sponsor and a new kit, Team Orica-Scott is looking good for 2017.

The start of a new season is an interesting time for Pro teams and cycling spectators alike. New riders need to settle into their position within the organization, old riders depart and new bikes and equipment need to be phased in and the superseded models eased onto the backburner. Nowhere has this been more apparent than at Australia's premier cycling headquarters, Team Orica-Scott (formerly Orica-Bike Exchange, formerly Orica-GreenEdge).

The talented and charismatic sprinter Michael Matthews has departed for Team Sunweb and has been replaced by Czech GC specialist Roman Kreuziger, and the focus for the team has shifted from individual Grand Tour stage wins to overall General classification success. 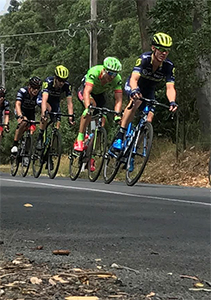 There have also been some changes with their equipment – and, obviously, their naming-rights sponsorship change. "2017 is already shaping up to be an exciting year," said team general manager Shayne Bannan.

"Scott Sports, our bike supplier since the team's inception six years ago, have stepped up to become a naming rights sponsor, which we're very pleased about."

"We've also recently forged a relationship with Giordana, who will be supplying all our clothing kit. They've supported the sport for a long time now, and we're confident our riders will enjoy the benefits of their new product line."

The team is switching to the Italian brand after three years with Swedish manufacturer Craft; in its first two seasons in the professional peloton Santini supplied all the kit to the then-Orica-GreenEdge team.

Although there are some subtle differences between the 2016 and 2017 kit designs, it is definitely still recognizable as being the same team. Apart from the obvious change in major sponsors, the other big difference is the addition of the bright yellow bands around the collar, sleeves and down the right flank. Gone is the bright green Movistar-esque squiggle across the jersey.

This is also the first time that the men's and women's teams will be wearing the exact same kit – a good thing too, as it adds to the appearance of unity between the two squads. And let's face it: whilst the men did incredibly well at the recent Australian Road Championships with gold in the criterium thanks to Caleb Ewan and two silvers courtesy of Luke Durbridge in the time trial and Simon Gerrans in the road race, it was the women clean sweeping the three events that really stole the show.

RELATED: Racer or not, is it safe to buy a road bike with disc brakes?

At this stage the women are still displaying some of the old Orica-Bike Exchange green, namely on their helmets and bikes. All riders in the team use Scott helmets, with most opting for the Cadence Plus with its aerodynamic properties and three removable plugs at the front of the helmet, and a few, like powerhouse Luke Durbridge, going with the cooler and better-ventilated Centric Plus. Whichever version they choose, the men's team helmets are all black on yellow or yellow on black, whereas the women, who all use the Cadence Plus, will be wearing the green of last year until the Tour Down Under kicks off on January 17th, when they too will switch to the new yellow and black scheme. For the riders that choose to wear sunglasses, the team issue glasses of choice are the Scott Leap LS. 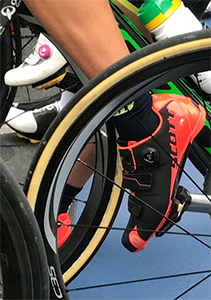 Scott will keep team Orica-Scott in the best gear in their line. image: Marcus Speed | BikeRoar

All riders on the team use the Scott Road RC shoes, although the colours vary considerably, with Mitch Docker and Luke Durbridge sticking with the conservative options of black and white respectively; Amanda Spratt and Matt Howlett favour a lurid blue, and Gracie Elvin goes bright bling with fluorescent orange.

Some of the new team bikes have already seen the light of day, with Caleb Ewan flexing the muscles of his new Scott Foil to take out the national criterium title and Luke Durbridge piloting his new Scott Plasma Premium to a silver medal in the individual time trial. Interestingly, Durbridge rode the new Scott Addict, resplendent in the new team livery, in the road race rather than the more aerodynamic Foil, as did Mitch Docker and Matt Howlett (Howlett, however, rode the 2016 version in the old blue paint job).

The women are all still riding the 2016 Scott Foil, and will probably opt to stick with them until the team heads to Europe after the Tour Down Under. "I love this bike," said Amanda Spratt after clinching her silver medal in the women's road race. "I'd be happy to stick with it all year!"

Her Foil features 11-speed electronic Shimano Di2 shifters and groupset, and Dura-Ace C35 WH-9000 35mm carbon tubular wheels with Continental tubular tires. The stem is an 80mm from Shimano Pro and is angled down at 6 degrees toward the aluminum PRO Vibe 7S handlebars with an anatomic bend. The brakes, derailleurs, shift levers and rear cassette are all Shimano Dura-Ace, and her saddle is a Syncros RR2.0.

The new Foil, as ridden by Caleb Ewan, carries the new Shimano Dura-Ace Di2 9150 11-speed electronic groupset, complete with dual shifters, brakes and brake levers, derailleurs, 53/39 crankset and a standard 11/28 rear cassette. Component manufacturer Syncros, now wholly owned by Scott Sports, supply the integrated headset, handlebars, stem, seatpost and saddle. The saddle is the new RR1.0 Carbon version; despite the numerical inconsistency, it's the next model on from the RR2.0 that adorns Amanda Spratt's machine. If purchased from a bike shop the Foil comes standard with a Zipp 30 Course wheelset and Continental Grand Prix 4000 tires, but the Orica-Scott bikes seen so far are running the same Dura-Ace C35 WH-9000 wheelsets as last year, with various Continental tubular tires attached, presumably depending upon rider preference. 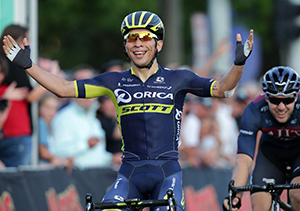 The new Addict RC, billed as the climber's choice within the Scott family, again features a slew of components from Shimano and Syncros. Weighing in at just 790 grams for the frame and a meager 300 grams for the forkset (size medium), the Addict is definitely light. Rather than the deeper 35mm wheelset that features on the Foil, the Addict runs Dura-Ace WH-R9100 Carbon CL24 rims – considerably lower in profile at 24mm as opposed to 35mm, and slightly lighter, and comes clad in Continental 4000 tires. Syncros once again supply the stem and handlebars, this time in the form of the Syncros RR1.5 1 1/8" / four bolt stem and Syncros RR1.0 Carbon anatomic bars. The saddle and headset unit are the same as on the Foil, but the Dura-Ace crankset comes in a more climber-friendly 52/36 tooth combination.

Take a quick glance at the Orica-Scott outfit and it's easy to make the mistake of thinking they've just swapped sponsors and painted their bikes, but dig a bit deeper and you find there are changes at every level. With multiple victories at the prestigious Bay Classic Criterium series and the aforementioned Australian National Championships, it's already been a big year for the team from Down Under – and we're only 12 days into 2017! There are big plans for the Tour Down Under, the Giro, the Cobblestone Classics and ultimately the Tour de France. Stay tuned.

Climbing bikes are unique weapons that help riders conquer the most difficult races on the road.

BikeRoar takes a close look at some of the bikes used to tackle... READ MORE

If you're looking to start doing triathlons or time trial race you're going to need to do some mods.

BikeRoar is here to give you 5 easy mods that will transform your bike into a... READ MORE