Bicycles with SR Suntour forks recalled due to crash hazard 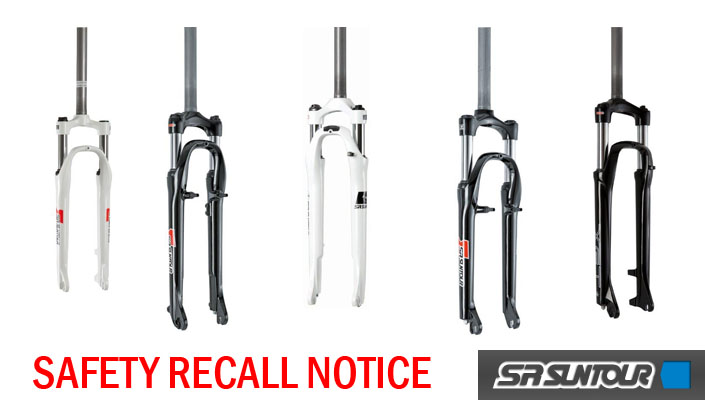 Several models of SR Suntour suspension forks are being recalled.

Thousands of SR Suntour bicycle suspension forks are being recalled due to a safety hazard. The bolt that attaches the upper part of the fork to the lower part can break or separate, causing the front wheel to come off the bicycle.

There have been 15 reports of the bolts breaking or separating from the bicycles, including two reports of minor injuries.

SR Suntour North America is working with the United States Consumer Product Safety Commission and Health Canada on the joint recall of 68,000 units sold in the U.S. and 33,600 in Canada.

The forks have been incorporated into finished bicycles under the following brands: Cannondale, Diamondback, Giant, GT, INA International, Schwinn, Scott and Trek.

Bicycles with these forks sold from November 2014 through May 2015 for $300 to $400 at bicycle shops, sporting goods stores, and mass merchandisers.

Recalled forks have serial numbers in the top row beginning with “K” and ending with a number between 141101 and 150127. The fork model and serial numbers are located on the back of the fork’s crown. The serial number is the first row. The model number is in the second row. “SR Suntour” is printed on stickers on both sides of the fork legs.

Consumers should immediately stop using the bicycles and return to the place of purchase for free inspection and repair.

You may feel envious of the professional cyclists dancing up the hills, or even your Sunday ride whippets spinning the pedals like they don't have a chain. Sometimes they may seem light-years ahead in ability, but that's just because you don't know their secrets... READ MORE