Are cyclists the world's toughest athletes? 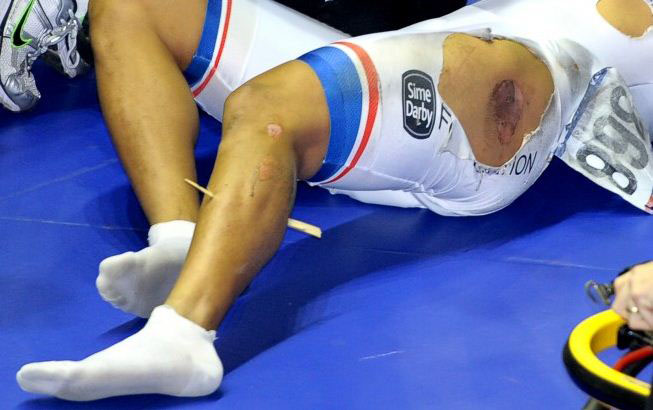 The definition of tough: Podium with an 8inch splinter in the calf.
image: telegraph.co.uk

Professional road cyclists are the toughest athletes in the world. Bold claim? Maybe, but in the aftermath of some truly spectacular crashes at this year's Tour de France, perhaps it is time to put together a handful of the most incredible acts of insane toughness and "never say die-ness" to prove once and for all why cyclists are way harder than anyone else on the planet.

Four riders have died competing in the Tour, either from crashes or, in the case of Tom Simpson, "heart failure caused by exhaustion." Being full of amphetamines and alcohol and racing up Mont Ventoux in the blazing heat probably didn't help, nor did the crazy determination to keep riding even after collapsing off his bike once already.

Back to contemporary times, and who can forget the image of Johnny Hoogerland in 2011 who was hit by a car and catapulted into a barbed wire fence. His lacerated legs required 33 stitches, but only after he got back on his bike and finished the stage, riding hard enough to take the polka dot (climber's) jersey in the process! He finished the Tour that year.

Cadel Evans in 2010 crashed, took the Yellow jersey, only to relinquish it the following day, obviously suffering from immense pain. He later revealed he was racing with a fractured elbow. He would also finish the Tour.

Professional riders work so hard and sacrifice so much just to start the world's most important cycling event that it often takes a truly horrific injury to sideline them. This year has been no different with several examples of pure toughness on display. 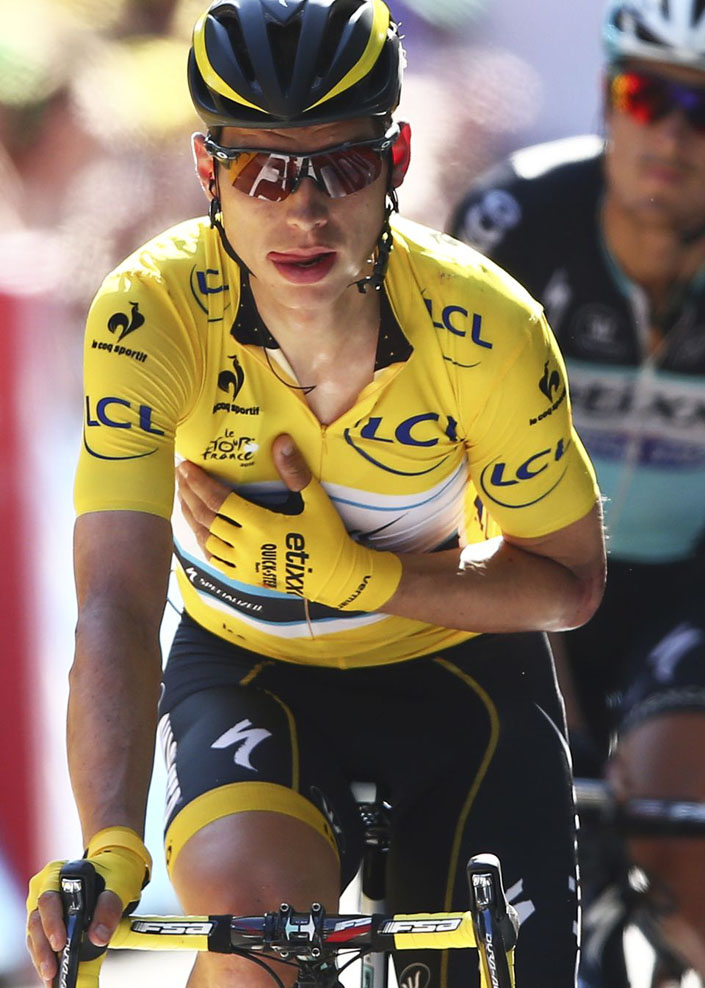 Tony Martin nursing an open fracture to complete the stage.

The stage 3 crash was as bad as they come, with riders smashing into each other and cart wheeling along the road and into a ditch. Rapid deceleration from 80km/h can do that. A few riders were so badly injured that it was straight to hospital, but a couple of others continued racing. Fabian Cancellara fractured two vertebrae and kept riding to finish the stage. Let that sink in for a minute: He broke his back and kept riding, obviously in tremendous pain. Unfortunately, Fabian couldn't start the following days stage but he was probably better off in bed!

What about Michael Matthews, who was caught up in the same crash and winced his way to the stage finish looking very ginger indeed. Well, the reason for that are the two fractured ribs he sustained in the crash. Matthews is still struggling to take a deep breath, but he's in the Tour - he is still racing!

I think this year hats go off to Mr. Tony Martin, the indomitable German and all-round good guy. Wearing the Yellow jersey, Tony hit the deck and broke his collarbone. It was an open fracture, meaning the bone was protruding through the skin, but Tony wanted to continue racing the next day! It took strict orders from the team doctor to get Tony into hospital and under the surgeon's knife. Crazy German, but he's a cyclist; that's how we roll.

It's not just the Tour riders...

Toughness spreads across all disciplines of cycling. In the 2011 Keiren World Cup, Malaysian rider Azizulhasni Awang crashed and ended up with a massive splinter of Siberian pine protruding through his calf. He kept riding and took third place before going to hospital so the doctors could work out how to remove the large piece of wood from his body!

But surely the greatest example of how tough cyclists are is represented by the Australian endurance mountain bike hard-man Craig 'Gordo' Gordon racing the 2006 24 hours of Adrenalin (basically the World Championships of solo 24hr MTB racing). The race had been dominated by American Chris Eatough for years and Gordo was determined to end the reign.

In the process of driving his body beyond anything remotely reasonable for a normal person, (and eventually taking victory by a whole lap), Gordo pushed himself into rhabdomyolysis, a potentially fatal condition where the muscles break down and pump toxic proteins into the bloodstream:

rhabdomyolysis:
A common disorder which may result from a large variety of diseases, trauma, or toxic insults to skeletal muscle. It may be defined as a clinical and biochemical syndrome resulting from an injury which damages the integrity of the sarcolemma of skeletal muscle, leading to the release of potentially toxic muscle cell components into the circulation. This may result in potential life-threatening complications including myoglobinuricacute renal failure, hyperkalaemia and cardiac arrest, disseminated intravascularcoagulation, and more locally, compartment syndrome. 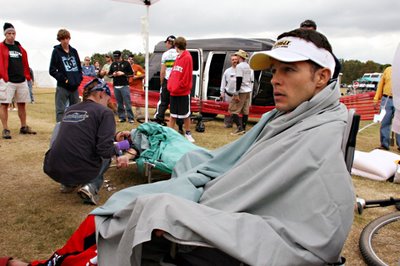 Bad news indeed. Craig nearly pedalled himself to death and had to spend a few days in hospital on dialysis to purge his blood of the toxins before they destroyed his kidneys.

"The muscle breakdown combination with my dehydration sent a really toxic level of proteins into my blood stream," he said. "In a normal person the range of the protein is in the 20-250 parts per whatever range. My count was 5800."

The event is captured in the film "24 Solo", directed by Jason Berry who recalls overhearing Craig's phone conversation with his mother while hooked up to an IV drip in hospital. This snippet really captures why cyclists are tougher than anyone else in the world of sport

RELATED ARTICLE:
Road cycling: What to do in an accident

We all ride a bike for the good times, whether it be beating the traffic home, railing some singletrack or ticking over the miles. But during our two wheeled adventures there is the possibility that something could go wrong. It's a terrible thought, but we could be involved in an accident or... READ MORE