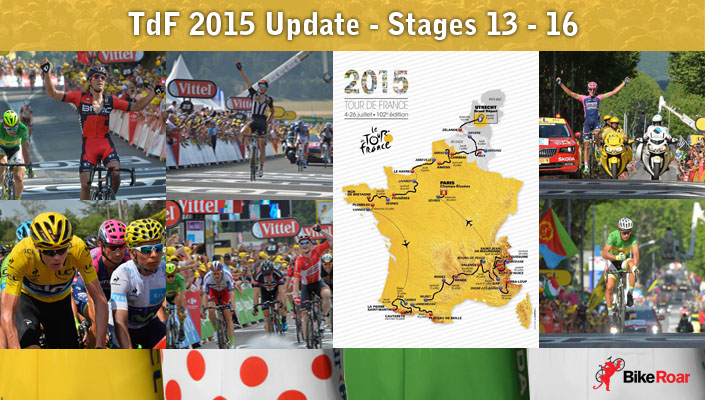 The Tour left the steep French Pyrénées mountains behind and continued through France's hilly southern terrain on its way to the Alps. The four stages of racing had climbers, sprinters, and breakaway riders all getting involved in spectacular racing.

Three breakaway riders, Wilco Kelderman (LottoNl-Jumbo), Thomas De Gendt (Lotto Soudal) and Cyril Guatier (Europcar) made it a thrilling finish, holding on until the very last metres only to be denied as Van Avermaet led Sagan past. After losing out in the intermediate sprint to Andre Greipel of Team Lotto Soudal, Sagan extended his lead in the sprinter’s points classification to 24 points with his fourth second-place stage finish of this Tour de France.

The big guns in Froome, Quintana, van Garderen and Contador all stayed quiet and slipped safely under the radar, with no changes in the General Classification. 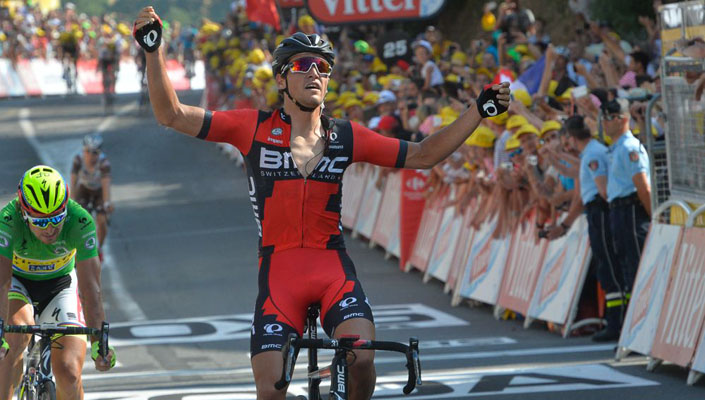 Steven Cummings (MTN-Qhubeka) made history on stage 14 by snaring his team’s first ever stage win in the Tour de France on Mandela Day.

The British rider, who, like the rest of the African MTN-Qhubeka outfit was wearing a specially decorated helmet to commemorate the life of Nelson Mandela, was part of an early break which had to withstand numerous attacks from the peloton all the way to the finish in Mende.

Cummings struggled to stay in touch with the breakaway on the early slopes of the final climb of the Côte de la Croix Neuve as Romain Bardet (AG2R-La Mondiale) and Thibaut Pinot (FDJ) moved clear of the main escape, but he managed to claw his way back into contention and by the summit had almost made contact. Pinot, whose cursed Tour seems destined to continue, paid the price for his hesitant cornering on the descent toward the finish line, and Cummings powered past the French duo. Pinot’s expression said it all as he crossed the line in second place – a rare opportunity for a Grand Tour stage win wasted. His compatriot Bardet finished third, only a handful of seconds behind.

The battle for the yellow jersey raged on in the background, with Chris Froome again asserting his dominance of the race by sprinting past Movistar’s Nairo Quintana at the finish line to steal an extra second. Froome looked invincible and ferocious, no doubt in part due to a disgraceful spectator flinging urine at him partway up the climb. Undaunted, he left the other GC riders in his wake, with only the tiny Colombian Quintana able to match him until the final few metres. His efforts moved him past BMC’s Teejay van Garderen, who still looked composed but slipped to third overall, now 3:32 behind Froome as opposed to Quintana’s 3:10. 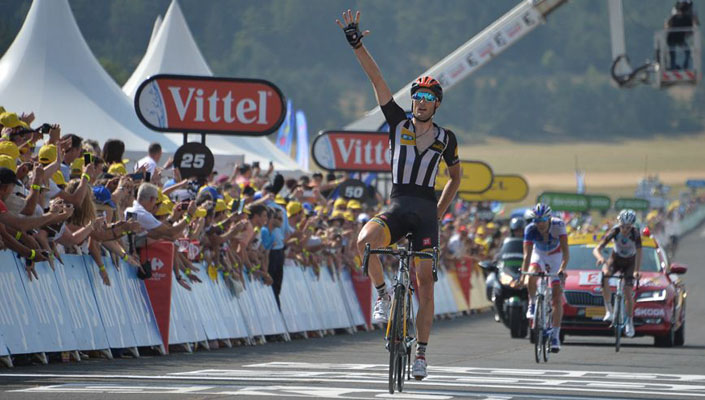 Andre Greipel of Team Lotto-Soudal took his third stage win of the Tour on Sunday, winning a high-powered sprint in Valence after a rather mountainous 183km. John Degenkolb of Giant-Alpecin was second, closely followed by Alexander Kristoff of Team Katusha. Noticeably absent from the final sprint was Etixx-QuickStep’s Mark Cavendish, who struggled up the climbs and finished in a bunch of stragglers some 9 minutes behind the peloton.

An early breakaway group formed as it has for the past four mornings, and as usual Peter Sagan of Tinkoff-Saxo found his way into it. They never established a lead of more than three minutes, and so were unlikely to survive all the way to the finish, especially considering the hazardous cross-winds and wet slippery roads. The only intermediate sprint of the day, and presumably Sagan’s reason for being in the break group, came at km 108. The Slovakian easily rolled through to gather the 20 points and further extend his lead in the green jersey ranking.

With the notable exception of Cavendish, it was a day for the sprinters and the General Classification standings remained unchanged. 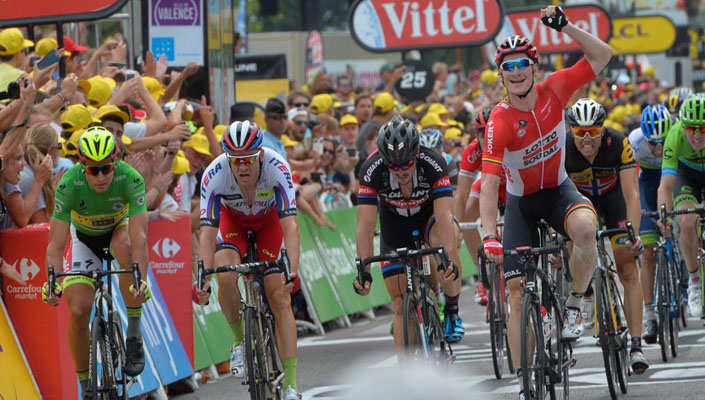 In the most spectacular stage of the race so far, Ruben Plaza Molina finished solo to win after attacking on the final climb and doing just enough to hold off Peter Sagan during the descent. 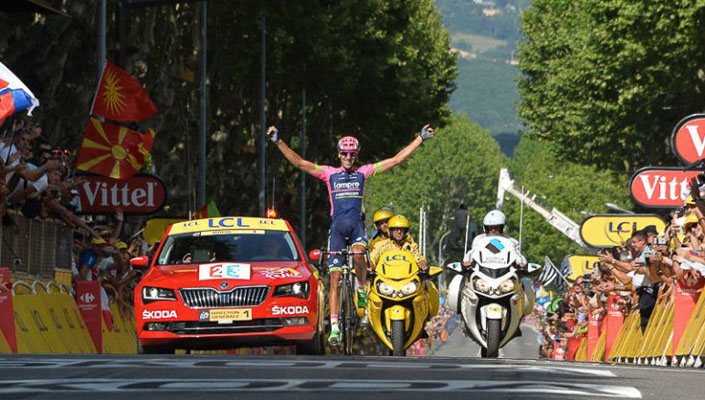 Nobody in the breakaway group was willing to help Sagan chase down Plaza, so in a breathtaking blend of recklessness and exquisite bike handling, he plunged down one of the most technical descents in all of cycling, the Col de Manse, scattering spectators and narrowly missing parked motor homes and RVs as he shaved every possible inch off each potentially fatal bend. He came within 30 seconds of overhauling Plaza – the Spaniard may have won the stage, but Sagan's incredible ride will be what fans remember from this stage. It was the opposite of the much-maligned Pinot Thibaut’s effort two days earlier: the Frenchman’s lack of panache and self-belief made second place a wasted opportunity, whereas Sagan’s near-victory was all about the magnificence of the effort rather than the end result. 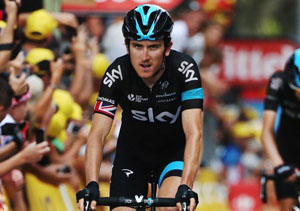 Adding to the highlight reel was Chris Froome’s loyal bodyguard Geraint Thomas – in the final descent Warren Barguil misjudged a corner, pushing Thomas off the road, where he bounced headfirst into a telegraph pole and then tumbled into a roadside gully [VIDEO HERE]. Incredibly, he managed to locate his bicycle, remount and finish the stage, only losing 40 seconds in the process.

Vincenzo Nibali looked the strongest of the GC riders, and managed to gain back nearly 30 seconds on his rivals. However, he remains in 8th place overall and is still nearly four and a half minutes behind the podium places.

Where to From Here? 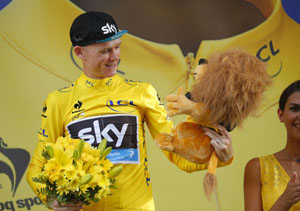 With only four more contested stages remaining plus the ceremonial parade into Paris, nothing short of a catastrophe can tear the yellow jersey away from Chris Froome. However, the minor placings are definitely still up for grabs, with only 83 seconds separating positions 2 through 5. A characteristic Alpine Contador attack, or a much-anticipated van Garderen solo summit finish, would seal the deal, but Quintana, Valverde, and Thomas are all waiting in the wings, looking for their chance to pounce. The Alps are full of mystery, so hopefully a few more surprises are in store before the greatest show on Earth rolls down the Champs-Élysées.

Le Tour traversed the French Pyrénées mountains in stages 10, 11, and 12, and began to define the race for the overall win in Paris... READ MORE