5 ways to introduce your kids to competitive cycling 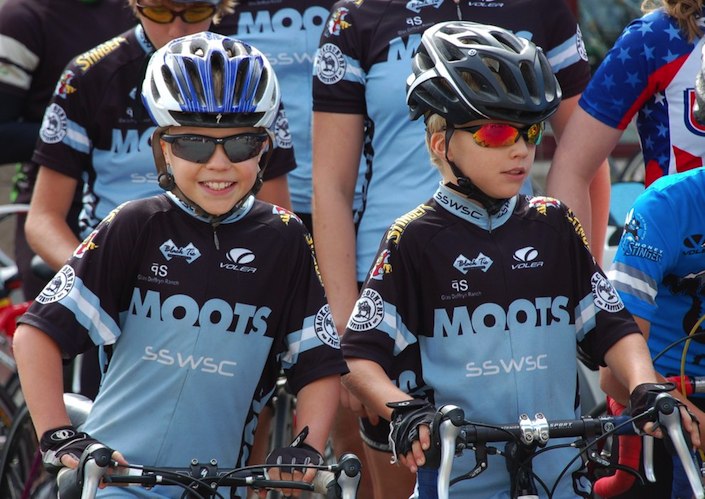 There are few thrills that can rival riding in a bike race, and it’s a pleasure that you will most likely want to share with your children. Whether they become the next Bradley Wiggins or Marianne Vos is irrelevant – they can have tons of fun pretending to be a cycling hero while riding in a peloton on the roads or dirt tracks.

However, you have to find a way of presenting the sport to them and encouraging them to find their own passion on their terms. Here are five ways of the best ways that you can introduce your kids to competitive cycling. 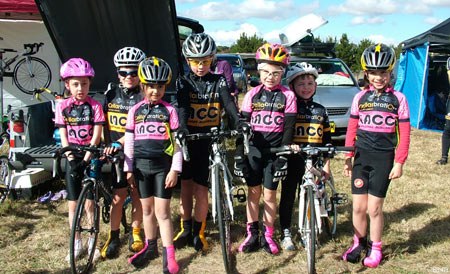 While there are many other ways of getting into competitive cycling there is nothing that really comes close to riding in a local club. At club evenings children get to ride with others their own age under the supervision and guidance of seasoned cyclists. This is usually an eye opener. The kids get to see how fast you can actually go when riding in a group, how you can improve your technique and in essence go a lot faster than you thought possible. The next natural step for most is to take this new speed into a race setting.

DID YOU KNOW?  Clubs are the greatest resource for learning about junior cycling meets and an introduction to racing. This can all start at a very early age. As Ian Watson from the Lidcombe-Auburn Cycling Club (LACC) says "Our motto is "as soon as they're out of nappies they're on a bike...otherwise they end up playing soccer."

The easiest way to find out about cycling clubs in your area is to visit your local bike shop. Bike shop staff are often involved in the local scene and are a wealth of information in their own right.

Generally speaking there are few ways as convincing for young riders to get into cycling as having friends who they can ride with. If there isn’t a club nearby, another way of introducing them to competitive cycling can be by mentoring them. Mentoring can be anything from arranging tiny races on closed parking lots where you live, to riding with a group of kids and teaching them about racing.

There is a special feeling involved in going to see a race. If it’s one of the bigger events, there will be a lot of things going on. There’s the commercial caravan that moves through before the riders. The whirring, mechanical whoosh of a peloton moving past you is a unique experience, and that goes double for seeing them fight their way up a mountain or fly down it at breakneck speeds.

Add the excitement of being able to see them up close at the start and finish, getting bottles and other kinds of souvenirs and most youngsters will have a great day out as well as a good introduction to what racing bikes is about.

Perhaps not the most likely of tools to inspire and introduce kids to competitive cycling, but computers and other electronic devices can actually be a very good way of getting into cycling.

Fitness apps on phones can let your children track their progress on certain stretches of roads and let them set and then achieve goals. YouTube is a great source for cycling videos and social sites like Facebook are home to loads of clubs and sites that the kids can explore with you on hand to supervise and explain.

There’s also the possibility of getting them introduced through computer games – although you should probably avoid the really old school games. If names like Paperboy or Milk Race leave you nodding, you know what I’m talking about...plus indicate how old you are... 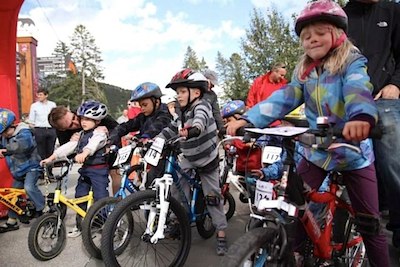 Another way of introducing kids to the world of competitive cycling might actually be through riding in a very non-competitive event like a sportif, or gran fondo. In these races, the focus is on finishing, not on coming first. Most sportifs offer different routes, with the shorter being well suited for younger riders. Training for an event with your children can both be a great way of spending quality time with them as well as being a good way of introducing them to cycling.

The sense of achievement connected to completing a sportif is immense, and normally riding in one gives you a chance to ride in a bigger group, or even a peloton, which is usually an eye opener for anyone. The sense of speed you can generate when riding in a group is very addictive, and a feeling that will probably leave them wanting more – which could either be another sportif or perhaps riding in races.

DID YOU KNOW?  Many mountain bike 24hr and other endurance races can involve overnight camping and many people bring the whole family for a weekend away. Part of the program is often a kid's race over a short track, and mum or dad can ride alongside as well! Is there a better way to getting the whole family excited about the thrill of bike racing?

What are your experiences? Have you got any advice on how you can introduce your child to competitive cycling? Let us know via the comments below: