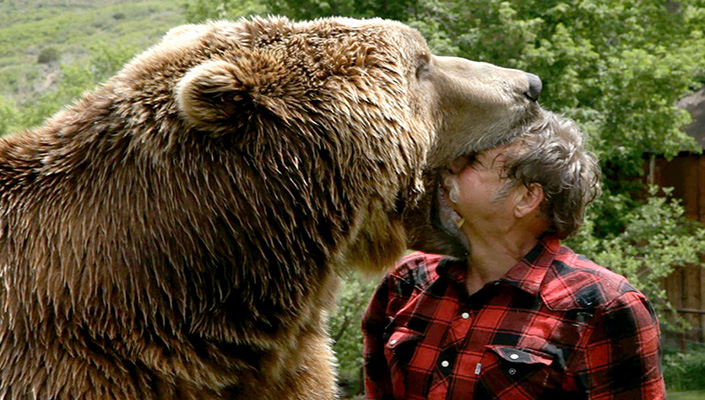 Most grizzly bears aren't as friendly as this guy.
image: youtube.com

Whenever we hear of an animal attacking a person, our reaction inevitably falls into one of two categories: we either reel in shock, demanding every last one of those animals be killed, or we say something along the lines of "well, we are in their territory, it's to be expected occasionally." With that being said, how do we react when we encounter an animal while out mountain biking? Yes, we are (mostly) still pretty close to civilization, but when it comes to animals such as mountain lions, bears, snakes, deer, elk, moose, and wolves, we are definitely guests in their home.

Wild animals mostly go out of their way to avoid us, but how should you react if you encounter a potentially dangerous animal while on your MTB ride? Let's look at handling some of the most recognized animals found in the northern hemisphere. 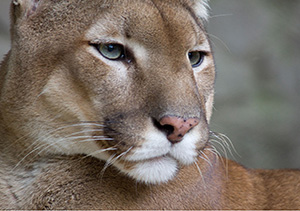 If you live in Canada, the continental United States, or South America you will be familiar with the cougar (also known as a mountain lion, puma or panther). A recently circulated video of a mountain biker's encounter with a cougar has sparked debate over whether he acted appropriately for the situation. Watch the short video below if you missed it. According to Amber Heredia, wildlife biologist: "If you see a mountain lion, you should freeze and back away slowly. You should make yourself look as big as possible by putting your arms up and yelling and sounding really scary. Lift your bike over your head and shake it. If you're wearing a jacket, hold it up behind you like a cape over your head to make yourself look big. If you have something to throw at it, do it (eg. rocks, water bottle), but don't crouch down to pick something up."

Amber does a lot of bird surveys alone in the early morning hours in natural habitat areas and has comforted herself by reasoning that if a mountain lion wanted to attack you, they would jump on your back from behind and snap your neck, you wouldn't hear them coming.

Face to Face With A Mountain Lion 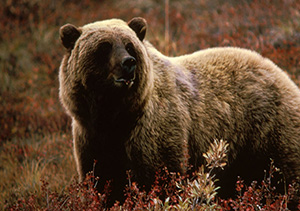 In North America, you are lucky to have several different types of bears and it is important to know the difference between them (as well as their motivation for attacking you) as it may save your life in an encounter.

Grizzly bears are massive, powerful animals who respond to danger by standing their ground and warding off their attackers. They are usually found a lot further out into the mountains than their black cousins. Mother grizzlies are fiercely defendants of their cubs and are solely responsible for 70% of fatal injuries to humans. As a rule of thumb, if you can see cute little grizzly cubs then their mother can see you as well. If a grizzly makes a non-predatory attack (i.e. it's protecting itself rather than wanting to eat you), play dead by lying flat on the ground and lacing your hands behind your head covering your neck. If it wants to eat you, there's not much that will stop them; knowledge is the only thing that can help keep you safe. If you don't know the times of the year when grizzly bears are feeding on large prey, or you don't know where they can be found, then it's best if you just stay out of the mountains. 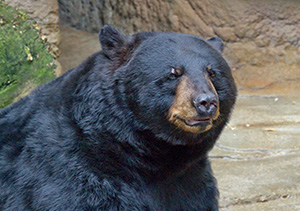 A black bear is medium-sized and typically avoids humans wherever possible. They aren't particularly territorial so the majority of black bear attacks tend to be motivated by hunger. Therefore, you have a higher probability of surviving by fighting back rather than submitting. If either bear makes a predatory attack (i.e. it's stalking you, disappearing and then reappearing, and wants to eat you), you need to fight back. Stand tall, even if the bear charges you - your only chance of escape is to fight it or scare it away. While the odds may seem stacked in Yogi's favour, bears do not generally see humans as prey, and a bear that makes a predatory attacks is usually juvenile, starving (not just hungry) or injured and may scare away if you hit it. 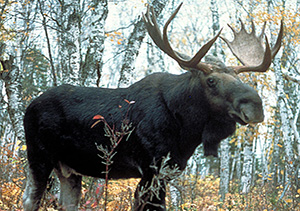 Moose can be EXTREMELY dangerous in the wild
image: wikipedia.com

Moose are not normally aggressive, but they can be extremely unpredictable. Males have a tendency to defend their territory, and females see you as a major threat to their calves. You'll know it's not happy when the long hairs on its hump are raised, its ears laid back (much like a dog or cat), and it licks its lips, but, to be honest, if you can see this, you are way too close.

If a moose sees you and walks slowly towards you, do not be fooled, it does not want you to pat it. It may be looking for a handout or warning you to keep away. Either option is bad news for you so you should back away and look for the nearest tree, fence, building or car to duck behind. If a moose charges you, the best thing to do is to run. Most charges are bluffs and they won't chase you far. If you can get behind something solid, like a tree or a rock, do it. You can also weave in-between tight trees, use your smaller size and agility to your advantage. If you are unlucky enough to trip over or be knocked down, it may stomp and kick at you with all 4 feet so make sure you try and protect your head as best as you can and hold very still. Don't try to get up until it has moved a safe distance from you or it may come back and start all over again. This advice is true for elk, deer, caribou, buffalo, and all other hoof-and-horn animals, but since moose are the largest we used them as the example.

RELATED: How to save energy while mountain biking 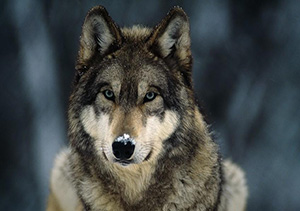 Like most animals, wolves prefer to keep their distance from people
image: National Geographic

First thing to know about wolves is that they are hunters. Really, really good hunters. Even if you are on a fat bike adventure in the arctic or somewhere in remote North America or Eurasia, the chances of you spotting or coming across a pack of wolves is small - but hey, anything can happen. If you are out on your bike and spot wolves (or wild dogs), whatever you do, DO NOT RUN.

Wolves really dig the chase and will definitely take you down on the run. Also try not to stare it down because they find that threatening. Avoid eye contact but don't look weak, and use strong body posture. Don't turn your back on them and do your best not to get flanked.

What you should do is try to look as big and scary as possible. If you have a jacket or shirt on, raise it above your head and shout angrily at them. Lift your bike over your head and shake it. If you have anything throwable in reach, use all of your might. Keep your emotions in check. Panicking will get you killed. If you are in a position to, back slowly away and be carefuly not to trip.

Encounters with coyotes and wild dogs are more common as both exist a lot closer in proximity to humans and can even happen inside city limits. All dogs are clever hunters, but attacks on humans by coyotes or any dog related species is rare. If you see any of these predators, clap your hands, make noise, and look as big as possible. This is usually enough to get a coyote or dog to leave you alone.

Knowledge truly is power and being as educated as possible on what threats exist in your riding zone is the best advice we at BikeRoar can give. Some people choose not to think about what could happen if they have a dangerous animal encounter, but being realistic and prepared for anything could be the difference between observing an animal, and being attacked by one.

BikeRoar gives you some tips on how to choose a line and how to... READ MORE

Whether you are a beginner or a seasoned pro, there are a few skills you should have no matter what.

BikeRoar put together a list of skills that every rider should have no matter...READ MORE