SRAM MTB 2016 Lineup: A quick round up and comparison 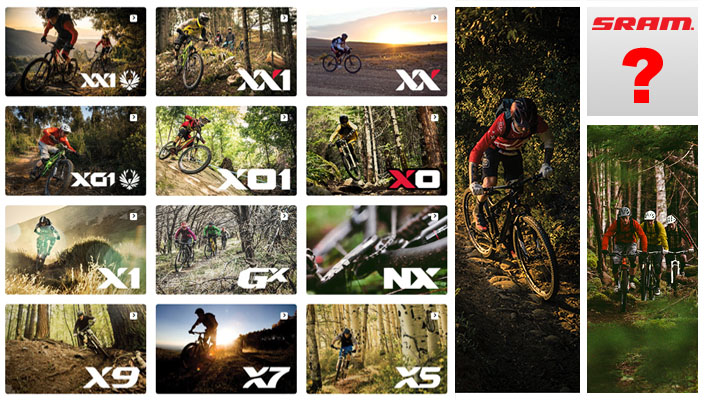 SRAM has been an industry leader in bike componenty for the past decade.

It can be a daunting task to understand all the components that go along with a bike, especially if you're relatively new to cycling. We at BikeRoar quite often refer to the parts grouppo on a bike as a main point of reference when understanding performance and value. The introduction of 2x10, 1x11, and now 1x12 drivetrains over the past few years means manufacturers like SRAM have adapted some existing component lines and have added brand new ones. With so many big changes happening in the components world we thought it might be useful for us to introduce SRAM's line of MTB drivetrain components for 2016.

SRAM is one of the major component manufacturers for bikes. This quick breakdown of their grouppos and differences should help you understand them and pick the one best for you.

[Note: While RockShox, Truvativ, ZIPP, and Quarq are all separate divisions of SRAM, this article sticks to covering SRAM drivetrain components.] 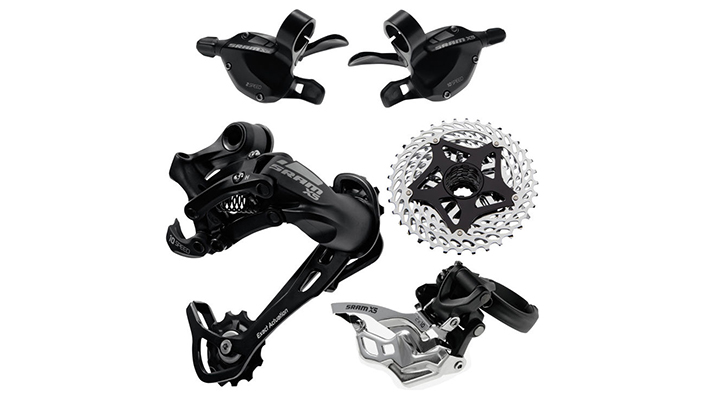 X5 is SRAM's entry level mountain drive train kit. X5 is mostly specific to 2x10 with its shifters, derailleurs, cassette, and crankset, and is used on a wide variety of bikes. There are, however, 9 speed shifters and front derailleurs available in X5. X5 cranks come in 2x10 and 3x10 options with an added set for fatbike use. Higher end recreational hardtails, entry level downhill bikes, touring bikes, and both all-mountain (AM) and cross-country (XC) full-suspension bikes all utilize X5, making it a truly universal kit.

X5 may tip the scale as a heavy drivetrain kit, but it runs smooth with little issue and can take a decent amount of abuse, making it the perfect kit for people who take chances and are working on their skills. Availability in short, medium, and long cage derailleurs supports X5's universal usability. The price of replacing a broken X5 derailleur ($51 USD) is much more affordable than X9 or higher, which keeps the product in demand at bike shops across the globe. 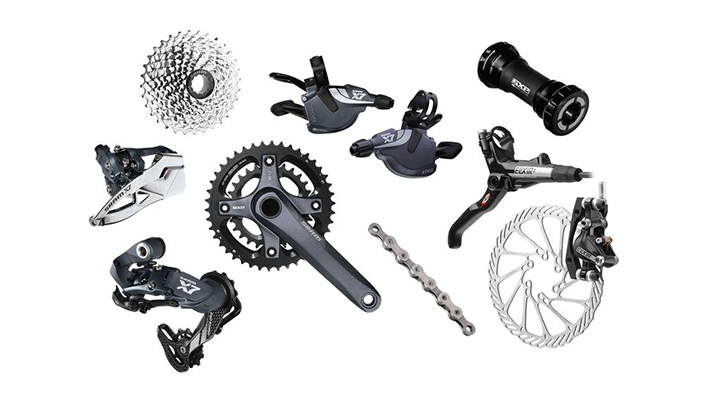 X7 begins where X5 leaves off, providing smooth shifting and a crisp feel for an affordable price. The main difference you will find between X5 and X7 is the introduction of X7 hubs and grip shifters. Available in short, medium, and long cage, X7 features both clutch and non-clutch rear derailleurs. The dual spring clutch also features a carbon cage, adding to its durability and crisp shifting. X7 cranksets are available in 2x10, 3x10 but nothing for fatbikes.

X7 is perfect for those who want an affordable and complete grouppo that will both out-perform and outlast X5 or lower components that came stock on their bike. 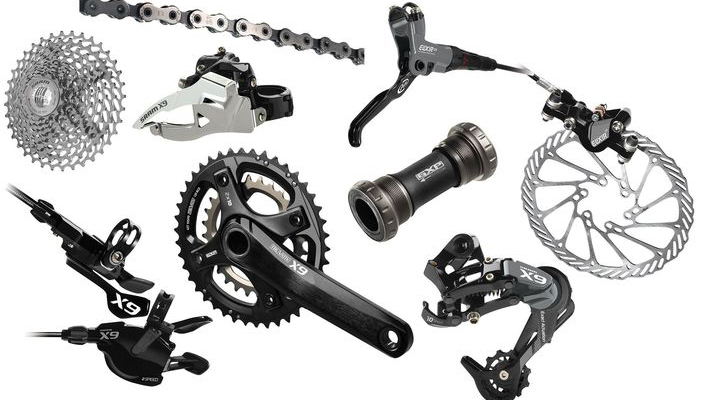 X9 is the higher end of SRAM's do-it-all consumer level grouppos. With further machining of their hubs, lighter and stiffer cranks, and stiffened derailleur, X9 is meant to both perform and last. The X9 cranks see the use of SRAM's X-Glide chainring ramping and their Open Core Technology crank arms, making them extremely light and stiff for the mid-level price point.

SRAM's Exact Actuation 1:1 derailleurs make X9 feel crisp and high end with almost instantaneous engagement and feel. X9 is a ultra-reliable groupset for those who are both upgrading from X5-X7 and want to stay 2x10.

With that being said, the low cost of SRAM's NX grouppo will surely see it beginning to be spec'd on recreation-class bikes and entry-level full-suspension bikes. This may inevitably replace SRAM's X5-X9 line of product if 1x11 makes its way into the recreation and sport-level bikes. 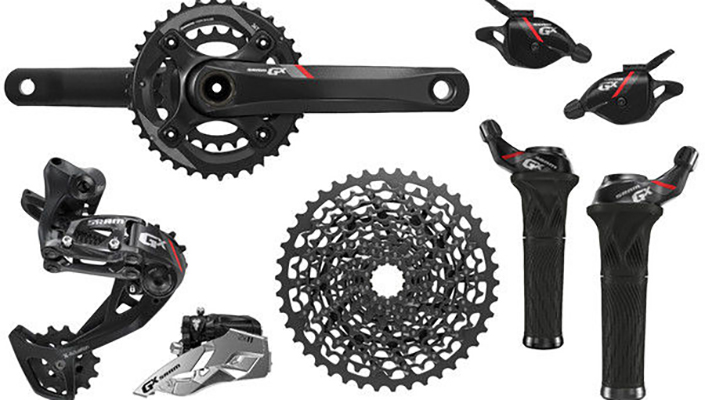 GX is SRAM's most universal performance grouppo with support for 1x11, 2x11, 2x10, making it usable by almost any rider on any performance bike. GX 1x11 utilizes new direct-mount chainring technology, eliminating the need for chainring bolts. GX also includes the first BOOST compatible crankset for the new PLUS sized wheels that are available on the market.

GX is performance based and can be used for higher-end consumer XC, all mountain, and in some cases downhill/freeride. The aluminum 11 speed cassettes, carbon fused derailleurs, and BOOST cranksets can set you back upwards of $700 USD for everything you need to convert to 1x11, which is a decent middle ground price. 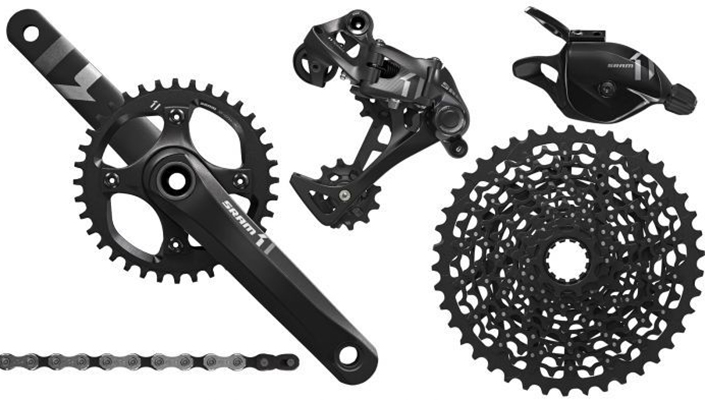 X1 is where things start to get serious. Dedicated 11 speed only, X1 is SRAM's upper-middle class drivetrain with a cost of $308 USD for the cassette and $279 USD for the derailleur, making it a reasonably pricey kit. X1 is being heralded as the 11spd drivetrain of choice for the common man. The cassette is pinned together rather than being machined from one solid block of aluminum like X01 and XX1. This leaves it slightly heavier, but half the price. The shifters lack the trigger angle adjustment found on X01 and XX1 and the derailleur is aluminum rather than straight carbon, but this makes it more damage proof and reliable.

Fatbike and BOOST compatible, X1 can be run on almost all higher-end new bikes. X1 does however require SRAM's XD driver, so you will not be able to adapt your existing 9 speed like you can with NX. 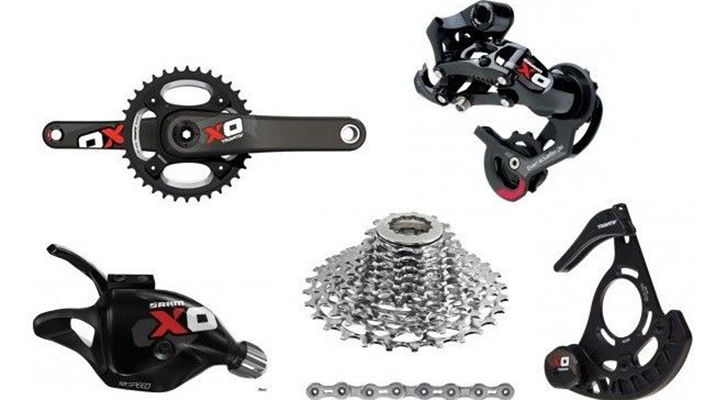 X0 has been around for a while as one of SRAM's premier component groups, and because of this there is still a lot of X0 variation available. Derailleurs come in 9 and 10 speed variations with short, medium, a long cage length options. Shifters are available in short-grip, long-grip, and trigger. X0 is where we begin to see lots of carbon bits and pieces. Derailleur cages and cranks are full carbon, keeping their weights down, but stiffness and strength up.

X0 usually finds itself on downhill (DH) bikes or aggressive all-mountain bikes, although with it being 9-10 speed, we will probably start to see X0 being replaced with X01 or X01 DH. 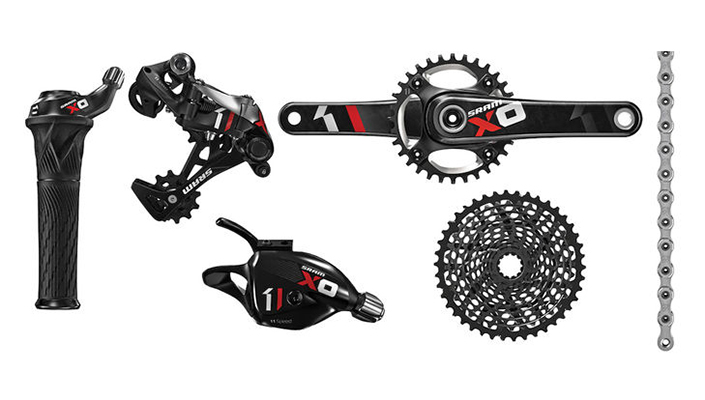 SRAM's flagship DH line, X01 could be called the evolution of X0. With a primary focus on gravity riding, X01 offers 7,10 and 11 speed compatibility. Yes, you read that correct, 7 speed compatibility. When riding DH it's rare that you find yourself needing more than 5-7 gears so why carry the extra weight? Despite being 7 speed, X01 DH still requires the use of the XD driver. The X01 DH X-Horizon rear derailleur does a fantastic job of keeping the chain in place no matter how rough the terrain gets. Combine this with an X-SYNC chainring and you negate the need for a chain guide in most situations.

X01 has both direct mount and bolt on chainrings, and the associated carbon cranks. The cassettes are machined out of solid aluminum and the shifter bodies are made from forged aluminum, making X01 one of the lightest and strongest kits available on the market. 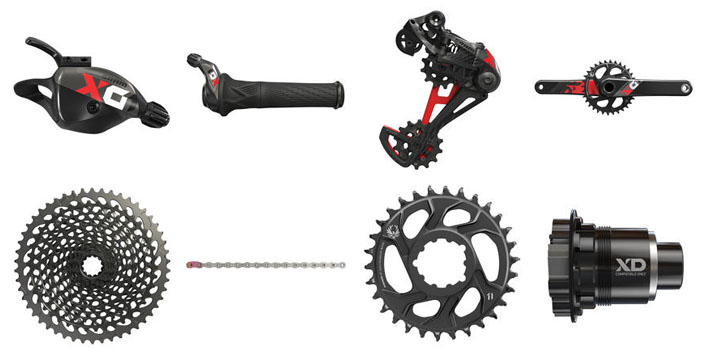 X01 Eagle is SRAM's new 1x12 AM/enduro drivetrain (released Mar. 2016). Using the same XD driver used in existing 1x11 means you can expand your gear ratio 500%, giving you near-endless possibilities and control over your high and low gears. X01 Eagle features redesigned cassette, chain, chainring, shifter and derailleur. It shares the same cassette and chain with XX1 Eagle, but the derailleur has been beefed up as has the foam filled cranks.

X01 Eagle is a continuation of 1x11 X01 with the 1x12 drivetrain said to run more smooth and last longer than existing 1x11 setups. There is little to no changes in weight and price between X01 and X01 Eagle, making it another option for the elite lever bike. We can be sure to see X01 Eagle being spec'd on 2017's highest end AM and enduro bikes and hopefully we see a more consumer-level 1x12 kit hit the market soon after. 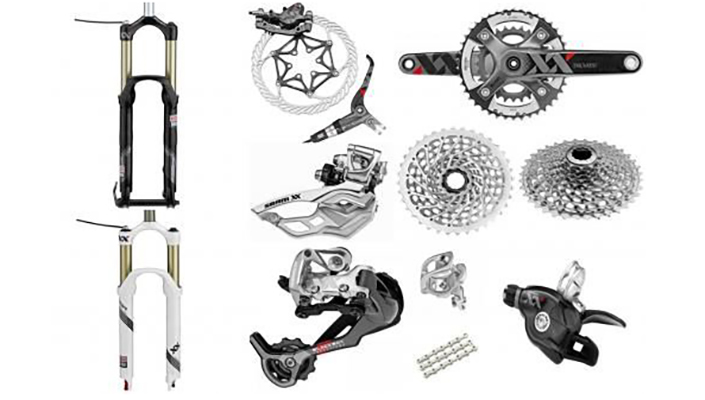 XX could be considered the 10 speed equivalent to XX1 to a certain extent. This drivetrain was designed to be 2x10 so it includes a front derailleur, trigger shifter set with carbon levers, and 2x10 carbon crankset. With XX being designed to be a pro level XC race kit, you can expect all weight saving measures to be considered. The shifters are slim and compact as is the derailleur and cassette. We also see both RockShox SID XX and Monarch XX suspension being referenced in this kit.

If you race XC and want to stay 2x10, then XX is your kit. Being one of the most trusted race kits on the market, you will find XX on World Cup level race bikes. If you are an amateur rider you may want to consider the newer lines of both NX and GX, as XX is more expensive and will not be as durable. 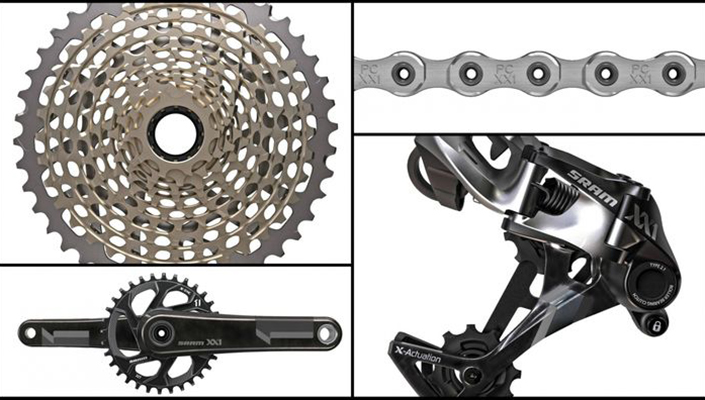 XX1 is SRAM's ultimate high-end race grouppo and with prices like $416 USD for the cassette alone, you can see why it's not for the average rider. The XX1 grouppo is made up of a trigger shifter, grip shifter, rear derailleur, crankset, and cassette. The cranks are BOOST compatible with carbon arms and CNC machined spider, and weighs in at just 546g including both spindle and direct mount chainring. Cranks can also be purchased with a Quarq Power Meter starting at $1,399 USD.

As the lightest grouppo in SRAM's lineup, the durability of XX1 might not be there for a recreational rider. But with the introduction of NX for the entry level 11 speed consumer and subsequent grouppos, there is still something for everyone in SRAM's MTB line up. 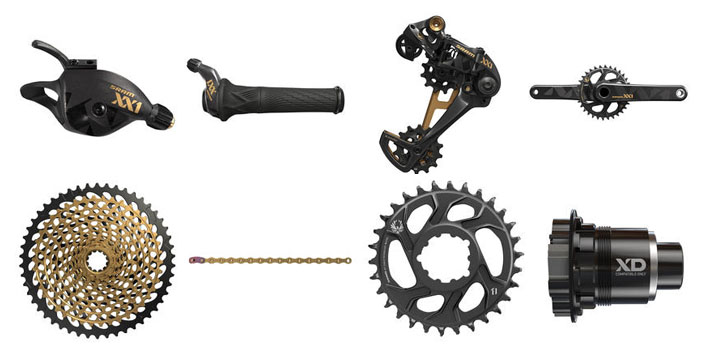 XX1 Eagle is SRAM's new 1x12 XC drivetrain (released Mar. 2016). Using their pre-existing XD driver, XX1 Eagle has the same cassette cogs as 1x11 XX1 with the addition of an aluminum 50t mega-cog. The 1x12 drivetrain not only gives you a 500% gear ratio (compared to 1x11's 420% and 2x10's 491%), you also get increased strength and durability through intelligent redesigning of the components. XX1 Eagle sees a redesigned 12 speed cassette, shifter, direct mount chainring, and a new clutch derailleur with 14t pulley wheels. The cranks are fully hollowed carbon, keeping their intended use elite XC. The new PC-1290 12 speed chain is narrower than 1x11 chains and features further machining and flush chain pins. The chain is said the be the quietest and smoothest chain SRAM has ever made, with a claim of having 4x the durability of a standard 1x11 chain.

With very minor weight and price differences between 1x12 and 1x11 XX1, the promise of increased gear ratio and durability makes it easy to see why SRAM was keen to introduce XX1 Eagle. Will it replace 1x11? Who knows, but what is clear is that non-1x systems are on their way out, fast. 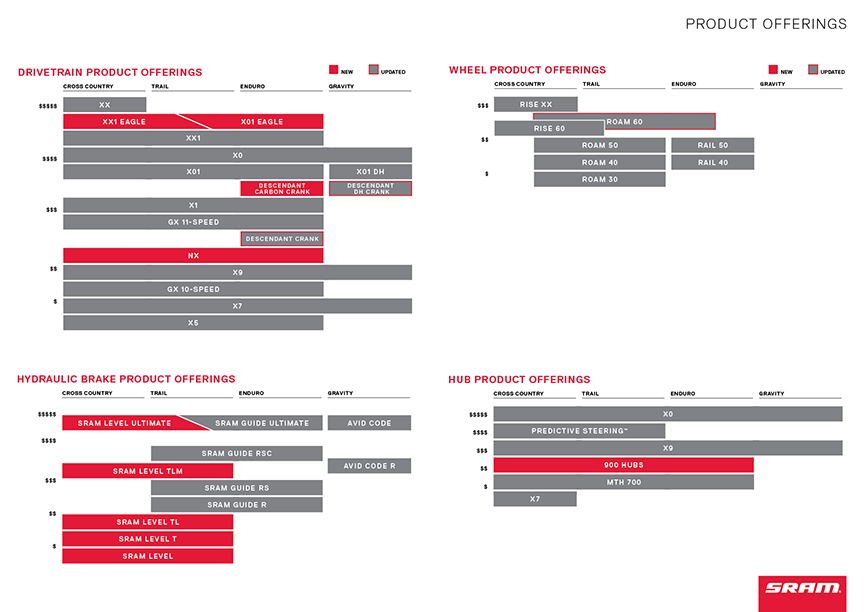 SRAM Product Matrix (as of April 2016). Click image to englare.

With 12 dedicated 3x, 2x, and 1x drivetrains, SRAM has multiple options for every rider. We hope this article was able to help you by simplifying and summarizing the differences of all the SRAM MTB kits available. 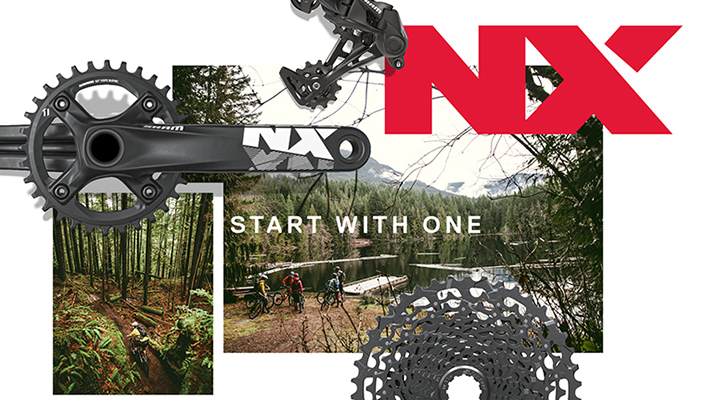 BikeRoar takes a closer look at NX and... READ MORE