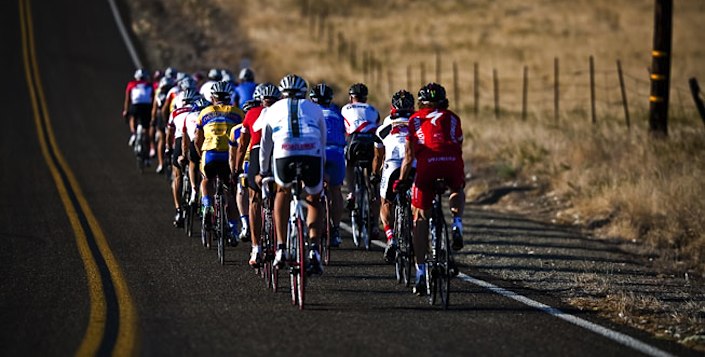 Following on from episode one, we will now be progressing to slightly more group orientated cycling. Yep, that's a fancy way of saying 'bunch riding'. The form of cycling that makes newcomers quiver in their cycling shoes. But fear not! It's easier, and way more fun than you think! Jump in, let's get started...

The bunch you ride with will have a great affect on the enjoyment factor of your ride. But it's a bit of a lucky dip sometimes, so just stick to what feels good for you. Sometimes riding with a slightly more advanced group is safer, and you might be lucky enough to have someone in the group help you out and pass on some advice. Either way, just relax and ride smoothly and predictably.

When riding in any bunch, spacing is crucial. Riding too closely to the person in front of you will prevent you from being able to slow down in time, and could result in a touch of wheels. It also means you tend to brake a lot harder than you need to, subsequently causing a chain reaction effect through the remainder of the bunch behind you.

If you ride too far behind the person in front of you, you won't gain any drafting benefits which defeats the purpose of riding behind them in the first place! Here are 5 general points to make you feel at home in your first bunch ride: 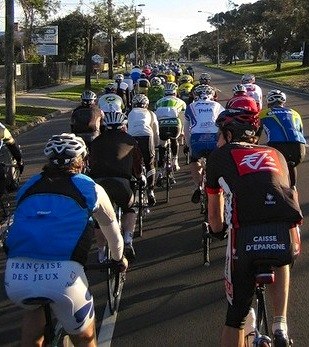 1. SPACE
Leave about 2 feet (60cm) of space between you and the person in front. This will give you enough time to brake smoothly when the bunch slows down, and will also allow you to just stop pedaling for a brief time (instead of braking) when you get too close.

2. BRAKING
Always ride with your fingers on the brake levers. This means you can react sooner to slight changes in pace and also respond to emergency stops, such as traffic lights or other road users.

3. VISION
Don't stare at the wheel in front of you - try looking between riders, or over their shoulders. By watching riders 2-5 spaces ahead, you'll increased your reaction time and will be more in touch with what's coming. Another little trick to try: If you see the riders 2-5 spaces ahead go through a bump, be prepared to ride through it yourself. This also applies if the riders ahead react to something. Best bet is, it's coming your way.

4. SIGNALS
Keep an eye out for the hand signals you learnt in our last episode. Those rules all apply in the bunch, and now the safety of yourself AND those around you is at stake. So, make sure you use the appropriate hand signals to inform people riding behind you. They can't see much more than a few degrees either side of you, so imagine that you are their set of eyes!

5. ALERT
Be aware and point out dangers such as; potholes, gravel, glass, water, sticks, slower riders, parked cars, pedestrians... anything that could cause an accident, even if remotely possible. If it crosses your mind as a risk, point it out to those behind you.

Verbal communication is often overlooked in cycling, mainly because people don't know what to say or when to say it. It's a bit of an unwritten rule, but verbal communication goes a very long way in the bunch. It's a great way to get a message across to other riders, especially for some constantly recurring instances (such as intersections or red lights).

When riding in a bunch, keep your ears pricked up for some of these terms. They may differ slightly depending on where you ride, but the message is still the same.

Never feel shy about raising your voice in the bunch - you may get a case of stagefright when you hear yourself yelling "Lights Up", but it portrays confidence and self awareness in the bunch. You'll hear plenty of other more experienced riders doing the same thing, so why not join in?

Our next Road Skills episode is the final of a three part series. It will contain the basics on how to 'roll turns' in a bunch as well as the two main cycling formations you'll see on the road. It sounds complex, but if you've made it this far, chances are you're almost ready for the next step!

Between this episode and the final edition, try to combine what you learnt in our first and second instalments. This will ensure you're ready to mix it up with a more advanced bunch once you read Episode Three.