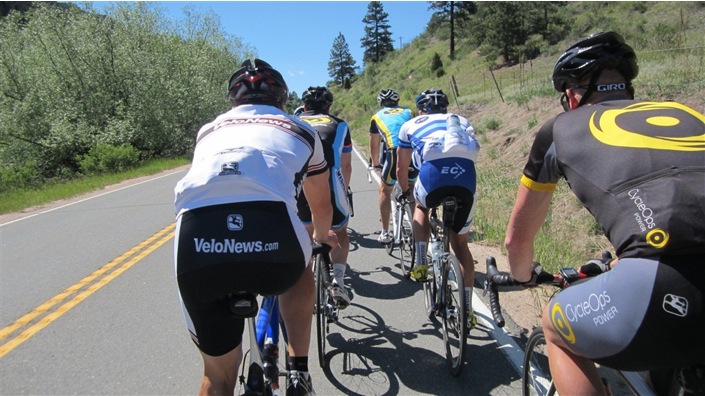 In our third and final Road Cycling Skills instalment, we will be discussing topics such as 'rolling turns' and riding two abreast in a bunch. To wrap it all up, we will teach you how to gracefully exit the bunch you managed to get yourself into in the first place. Good luck!

GET CAUGHT UP: Road Cycling Skills Part 1: The Basics

GET CAUGHT UP: Road Cycling Skills Part 2: Riding in a bunch

Riding single file is quite uncommon in large bunches for a few reasons. Your drafting effect is greatly reduced if you ride single file, as well as your presence in traffic. Cars are more likely to squeeze past a large bunch when they are all riding single file, as opposed to consciously overtaking a group riding two abreast. The other benefit of riding two abreast is that you get to catch up with the rider beside you - who will you end up talking to today?!

To ride single file, you obey all the same rules as if you were riding in a larger bunch. To ride two abreast, you still obey the same rules, except with somebody riding right beside you (enjoy the conversation with them!). It's also easy to switch between riding two-wide and riding single file. Just create a small gap for the rider in front to slot in to, and tell them they can merge in front.

Rolling turns is really good fun, especially when you become a little more accustomed to the process. Rolling turns simply means that the cyclists that were at the front of the bunch now pull over to the side and allow others to "roll through" to take their place. These two riders that have pulled off the front then gradually make their way to the rear of the bunch and rejoin the line of rotating riders. The benefit of this is that you all share the work involved in riding on the front of the group (in the wind) and it also makes the ride a little bit faster, but not much harder than doing it solo.

To roll a turn in a bunch riding single file, you simply wait until you end up on the front. Once you get there, do not increase the speed. Simply maintain the speed you were doing, and do so for a short period of time. Once you've 'done your turn' on the front, you can then flick an elbow on the side that you want the next guy to ride past you on.

Always leave off the front on the same side as the rest of the bunch have been doing. Once you've flicked your elbow, move off in the opposite direction to allow the next rider to pass you. Now that you've done your bit, slow your pedalling down and drift towards the back of the bunch and join in at the rear. 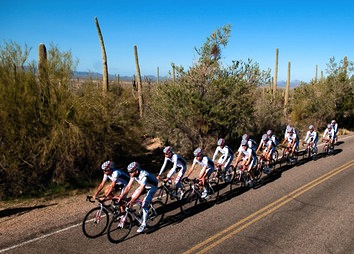 What you just learnt above is for rolling turns while riding single file. If you happen to be in a bunch of cyclists riding two abreast, the same concept applies. Except for one minor detail... pulling off the front once you're both done!

Surging:  One of the pet hates of a large bunch is a rider who "surges" constantly. This can happen when switching from saddle to standing on the pedals to ride up a gradient. The trick to smooth, happy bunch riding is maintaining a consistent speed. A surge moves down the bunch until some riders may have to hit their brakes to prevent riding into the guy in front, similar to what occurs for cars in busy highway traffic.

Firstly, never ride faster than the guy next to you - nobody likes it, and nor do you. It's best to match the speed of the bunch, and not the speed of the hero next to you. Once you two make it to the front, just roll a turn as normal. When you want to pull off because you've had enough (or maybe aren't as fit or strong) just ask the person next to you "you wanna pull off?". They might say no, in which case you can then pull off by yourself, and somebody will move up and take your spot.

However, if your partner says "Oh yes, I'm knackered. Let's pull off" then it becomes a bit more confusing for some people. How to get two people off the front of the bunch!? It's easy once you know how. Try the two options below, and remember to choose the best one for the conditions.

Braking:  Similar to surging, heavy braking is to be avoided at all costs. One of the most important skills in a bunch is regulating your speed while avoiding the brakes. Keeping your eyes on the wheel in front, while also being aware of what is coming up ahead, is a learnt skill mastered only after many hours of cycling experience. Consistent speed is crucial to the bunch operating optimally. Braking or even opening up a gap to the rider directly in front of you, then speeding up to get back on their wheel, creates a concertina effect that is rarely appreciated by fellow riders. 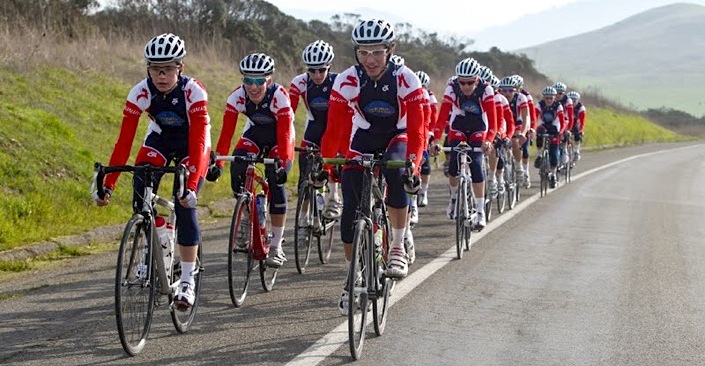 To exit a bunch, it's simply a matter of letting people know what you're doing. If you're in the middle of the group, you can just indicate by pointing in the direction you want to go, and slowly pulling over. Always pull out on the side you're riding on, meaning if you're riding on the left, pull out to the left. Do not hit the brakes as soon as you've pulled out - somebody could easily clip you as they pass, and take you both down. Just freewheel for a while, and once the bunch has passed, you can stop all you like!

Whatever you do in a group of cyclists, always move smoothly and slowly. Even if you're sure there is enough space to move, just do it gradually and maybe use some hand signals to show others your intentions. Once you've made a few friends in the bunch, feel free to ask someone more experienced if they wouldn't mind showing you the ropes. It's always a pleasure to take a newcomer through the motions and watch them smile at the end of the ride!

Ride safely, and be patient. There's a lot to learn, but you're part of a great group of people, who are all willing to help you out!