Guide to mountain bike suspension: An explanation of terms

You don't really have to know a lot about suspension to have fun on a mountain bike, but, if you've just spent a few thousand bucks on a you-beaut bike then surely you want to get the most out of the ride?

By understanding even just a few of these concepts you can start to feel certain qualities of the bike you ride and you will be more able to tune the suspension to how you like it. Tweaking all the dials, knobs and air adjustments on your fork and shock is great fun and very rewarding in the long term. I recommend that you take notes along the way so you can really get to know how each adjustment affects the ride.

Here is a brief glimpse at some of the more common features of mountain bike suspension:

Suspension travel refers to the distance the wheels move as the shocks compress. Obviously the greater the bike's travel the bigger the bump it can absorb before bottoming out or reaching the limit of the suspension. This is different to stroke, which refers instead to the distance the shock actually moves.

On the front fork the travel and stroke are the same, but on the rear the travel is usually a lot more than the stroke of the shock itself. This is because of the action of the suspension linkages which magnify the wheel travel. As a result you could have a bike with a shock that only compresses a couple of inches but actually provides several more inches of travel.

Sag is the amount the shock compresses when you sit on the bike and is a crucial part of full suspension bike setup. Typically anywhere from 20-30% sag is considered appropriate and is relative to the type of riding you want to do. Less sag results in a firmer ride and is good for XC, while trail and freeride bikes might run up to and over the 30% sag mark for a more plush and active feel.

To measure, there is often a rubber ring around the fork or shock which is used to check sag. Sit on your bike and see where the ring ends up. Alternatively you could use a zip tie.

A lot has happened in the world of mountain bikes since the Mantis Pro Floater. These days suspension technology is big business, with the larger..READ MORE

This is where the action is! Damping is the process where friction is used to convert the kinetic energy from the wheels into heat. 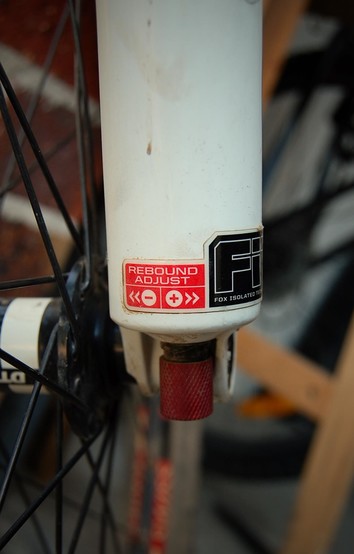 When a trail obstacle is hit, "compression damping" is the speed the fork moves or compresses when soaking up the impact. This is usually achieved by forcing oil through a small aperture called a "port".

While most forks will have easy to use dials to adjust the compression damping, some higher end models have the facility to adjust high and low speed compression. It gets complicated hey?!

High speed damping is for those sudden jarring impacts at speed. Adjusting this allows you to reduce the immediate spiking action of the compression cycle.

Low speed damping is for those small bumps that are constant when riding the trails and even for the effect of braking on the shock. Basically it stops the bike from diving into every small hit or alternatively, makes the fork more sensitive to the smaller hits.

When the fork has compressed it naturally returns to its original open position, but the speed at which it does this is controlled by the rebound damper. When the suspension is set up with a small amount of rebound damping it will decompress too fast and will feel like you're sitting on a pogo stick!

Opposite to this, too much damping, and the suspension may not return in time for the next hit, therefore never experiencing the full travel on offer. Rebound is adjusted with a dial on the shock and usually on the bottom of the fork leg.

The spring in a fork or shock is used to bounce the suspension open after it has compressed from hitting an obstacle on the trail. In any quality mountain bike this will be achieved with air, a metal coil or a combination of both.

Air shocks are usually seen on cross country and trail bikes, and are light weight and highly tuneable using a shock pump. The spring itself is the compression of air inside the fork or shock body: The greater the air pressure the stiffer the spring. The action is progressive, which means the more you try to compress it, the harder it gets to compress further. This is not ideal and can feel harsh when riding.

These are the shocks you would see on an aggressive gravity bike. They are very strong and durable and tend to offer more responsive, plush suspension than the air sprung versions. The spring is also linear which means it doesn't suffer the harshness sometimes associated with progressive air springs. The coils will be steel or titanium and are rated by their spring rate, which is basically a result of the coil's thickness and length.

While we are here.... the negative spring is used in some air shocks to negate the problem of stiction. This is where the friction of the shock seals means it takes a decent hit to get it moving and results in limited small bump sensitivity and a feeling of harshness.

The negative spring applies a small force against the main (positive) spring in order to get it into action when smaller bumps are encountered. This is an adjustment you want to read the manual to set up properly, or better yet, see your local bike shop staff and get them to do it for you.

Lockout is when you make the fork or shock inactive, and is usually used when climbing, or on smooth roads and trails where the suspension would otherwise soak up your energy from pedalling. Basically, a switch or dial closes the compression valve preventing oil from flowing. Most modern shocks and forks use a blow-off valve, which temporarily allows suspension movement to avoid damage to the damper if you hit a considerable bump.

Pedal Bob and Brake Jack:  It sounds like a couple of bike nerds, but nothing has troubled mountain bike suspension engineers more than these two suspects. Pedal bob (as mentioned below) is the effect pedalling has in compressing the suspension, thereby soaking up rider energy and forward momentum. Brake jack is when braking inhibits the movement of the suspension and can be detrimental to performance, especially when on a technical decent under brakes. 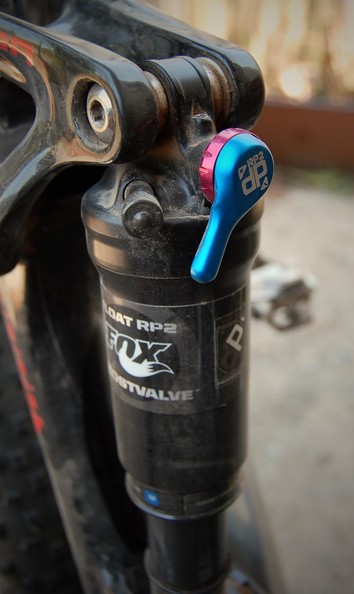 Although called "lockout", the truth is that most modern suspension systems never completely lock out the fork or shock from moving. This is where the threshold comes in. A rider can set the point at which the suspension becomes momentarily active then reverts to its "locked-out" position. This threshold is also known as the pedalling platform.

Platform technology came about to compensate for the tendency of some suspension designs to "bob" when pedalling force is applied. A pedal platform shock has the capacity to inhibit the flow of oil through the compression cycle of the shock's action. When a large enough bump is hit the shock goes into active mode but remains firm when other lesser forces are in play like, for example, pedalling.

Most shocks have the ability to adjust the platform for each rider's style, weight and preference, and it is typically set with a switch, dial or even from a handlebar control.

Some argue that the need for platform valving is to compensate for badly designed suspension. The problem as always is that everyone wants a supple, smooth, plush and linear suspension action with no pedal bob or brake jack! Not an easy one to address. Every design has a plus and a minus and it relates to the individual rider's preference as well. Later we will have a look at the affect different systems have on everyday riding.

This is a very short summary of some terms you will find in mountain biking. Talk to your local bike shop or mates on the trail to find out more and, ultimately, get more fun out of your ride!