Compact Cranks: What are they and should I upgrade? 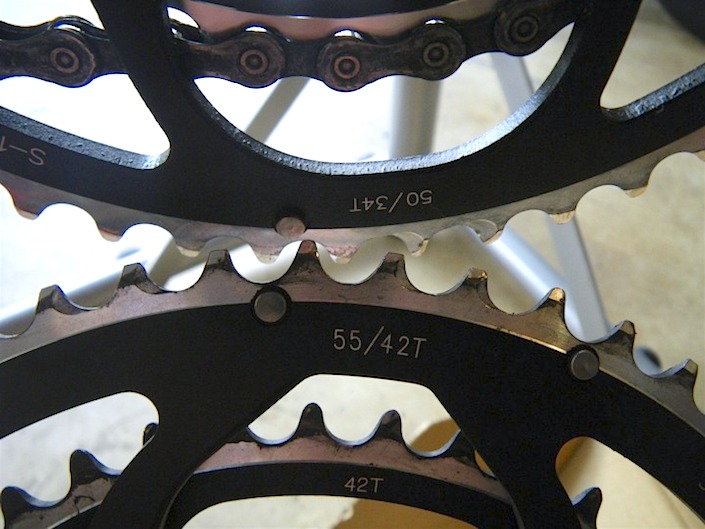 The markings say it all. Using a compact chainring has the potential to make your cycling more enjoyable.
Photo: DC Rainmaker

Compact cranksets seem to be fitted to most midrange bikes these days with the term being equally prolific in café conversations amongst cyclists. But what is a compact crankset and what are the benefits for you? We've taken a closer look behind what is on offer and whether or not you should upgrade to a compact crankset yourself...

WHAT IS A COMPACT CRANKSET?

A compact crankset refers to the double crankset on a road bike (meaning two front chainrings) with smaller than standard chainrings. This is also opposed to the old standard triple chainring option. From around 2006 and onwards, all major brands in cycling offered compact cranksets as an option on their midrange to high end road machines. This was a trickle-down effect from the pro peloton using them and the benefits emerging for the general riding population, who have now been granted access to this new secret weapon in cycling. 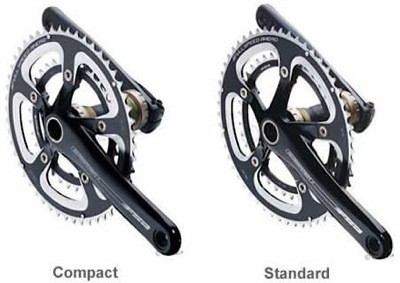 A compact crankset simply provides a compromise between two past options available to cyclists; either a triple crankset (with 30/42/52 teeth or 30/39/53 teeth chainrings) or the common double crankset consisting of two chainrings with 39/52 or 39/53 teeth.

The compromise offered by the revolutionary compact crankset would allow riders to choose from 34/48 teeth, 34/50 teeth or 36/50 teeth chainrings. This ultimately results in the same range of gear ratios on offer from its "triple" predecessors without the need of an extra chainring.

TECH NOTE:  Compact gearing on compact cranksets can actually offer a slightly higher gear or resistance when riding. If smaller rear cassettes are used, a rider can achieve a gearing of 50x11 depending on the rear cassette gearing. This is subsequently higher than a 53x12 gearing that has in the past been available with a standard crank and cassette setup.

WHY ARE COMPACT CRANKSETS SO POPULAR?

Compact cranksets are becoming increasingly popular, more through a process of 'forced choices' by brands than through consumer demand. However this isn't a bad thing as the above benefits have shown. There is definitely an increase in consumer knowledge behind the benefits of compact cranksets; cyclists have begun to take note of the proliferation of more favored gearing options. Offering a lighter chainring setup, smoother shifting, comparable gearing ratios and more sleek shifting components - compact cranksets have sold themselves through displaying these clear benefits.

The biggest benefit of a compact crankset is the ability for the system to afford lower gears for climbing, while still offering the required gearing for high speed riding in the flatlands. This is the number one benefit and is reputedly the main reason behind cyclists choosing to ride compact cranksets. Changes in resistance are known to be slightly greater between gears, though the benefits seemingly far outweigh this small point. There's nothing to lose at all, but plenty to gain. So why wouldn't you go compact!?

SHOULD I UPGRADE TO A COMPACT CRANKSET?

Many blokes may feel their manliness is being challenged by riding compact. The truth is that most people ride in too big a gear anyway. It's not easy for a recreational cyclist to push a 52 or 53 tooth chainring comfortably especially when we are told that it's best to spin at 90 rpm. Consider the following points to help decide if compact cranks are a requirement for your riding pleasure. 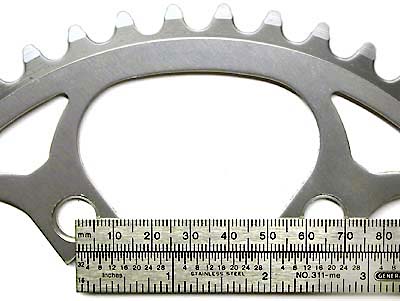 Compact cranksets are definitely the popular option when it comes to choosing a gear setup that offers the greatest range of gearing with the least amount of excess parts and weight.

Now that you have a little more background knowledge you can join in on the next post-ride debate as to whether you should also "go compact" or not. Once you decide which way to go, you'll then be able to choose whether to ride a mechanical groupset or a shiny new electronic groupset.