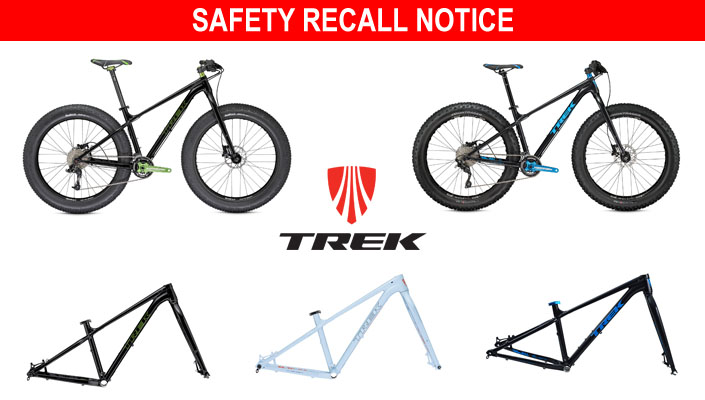 Trek recalls some Farley fat bikes due to fork issue.

Trek Bicycle Corp. has issued a voluntary recall for some of its Farley fatbikes because the forks on them may separate from the steerer tube, posing a significant hazard to riders. After receiving reports of noises and looseness from customers, Trek discovered some forks were assembled incorrectly and acted proactively to initiate the recall. Thankfully, the issue has been identified and no injuries have been reported.

Consumers should immediately stop using the bicycles / framsets and take them to a Trek retailer for a free inspection and repair. The Trek dealer will inspect the fork to determine if it is affected by the recall, and if so, Trek will provide — through the Trek dealer — a free replacement of the fork on your bicycle in a matching color, including free installation.

Trek is offering an additional incentive / compensation to affected customers - a coupon worth $100 in their choice of Trek or Bontrager products after the repair is complete.

Routine pre-ride checks are an important part of your bicycle maintenance routine. They not only ensure that your ride goes smoothly and free from disastrous mechanical failure, but are also key in keeping you safe... READ MORE

Fatbikes (a.k.a. fat bikes or fat-bikes) - a relatively recent cycling niche - are designed to carry adventurous riders out into wild places not normally accessible by bike. Enormous tires... READ MORE