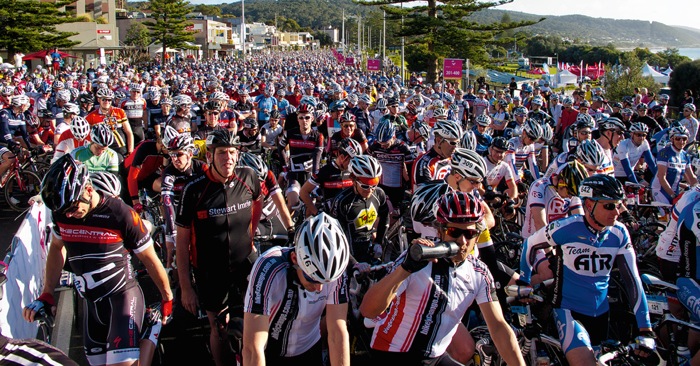 Thousands of riders participate in Amy's Gran Fondo every year. The group organizes many of these events which are run on closed roads and represent the safest way to enjoy a good day out cycling with a huge bunch! Photo: The Wheeler

We all love riding our bikes in one way or another for the simple pleasures it gives us. Whether it be rolling through your favorite sections of forest, or riding solo through the hills on your road bike. But in the background, beyond where most of us can see, there's a team of people working to improve and maintain your rights and liberties as a cyclist.

Advocacy groups are self-formed organisations that act to change the path of decisions. The actions and lobbying that these groups promote eventually work their way up to a higher level, such as the local council or even the government. In some instances, an advocate might focus on one single issue, while other groups form to address a plethora of issues - in this instance, cycling of any kind.

Although advocacy groups do not hold power to enforce rulings, they do have the ability to manipulate government policies and rulings in favor of the advocacy group and their members. The more members an advocacy group has, the more weight they can put behind their arguments. Advocacy groups in cycling are Non Profit organisations. They depend on donations, memberships and cycling club support to fund their survival. Some advocacy groups are fortunate enough to receive ongoing financial support from major companies around the world, helping these groups grow to international proportions.

A more recently formed cycling advocacy group is the Amy Gillett Foundation (AGF)and is based in Australia. The group was formed in the wake of Amy Gillett's tragic death during a cycling training ride in Germany, whereby she and her training group was hit by a car. Although the incident occurred overseas the effect was felt much more in her homeland, Australia. Rather promptly the AGF was founded and their actions began to gain momentum. 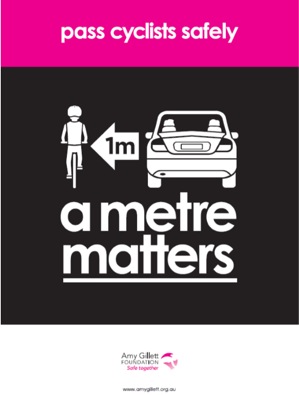 The AGF worked at a low level at first, trying to increase driver awareness of cyclists in general. With effort support for the group increased and their vision "to eliminate bike related fatalities" began to spread far beyond the reaches of their local council. Today, the AGF funds billboard advertising, street signage and has gained the ongoing support of the entire cycling industry within Australia. Their message has reached digital media, with drivers being urged to be mindful of fellow road users. For more information visit Amygillett.org.au.

More recently, the AGF has been trying to convince the Australian Government to set their message in stone - "A Metre Matters". This message has been vocalised by the AGF, as well as their civilian support base with thousands of cyclists donning the Amy Gillett Foundation clothing. The ruling has yet to be passed as law, but the fact that it's even a slight possibility is just mind-blowing.

UPDATE:  One Australian state has now introduced a law that a car must give cyclists 1 metre (about three feet) of space on roads up to 80km/h and 1.5 metres at speeds beyond that. This came about in response to the lack of any legal way to make drivers accountable for acts of gross negligence leading to the death or injury of cyclists. Prior to this it was very difficult to bring charges against vehicle users; a fact highlighted after a spate of tragic cyclist deaths in the state capital, Brisbane.

In the US a group called "peopleforbikes" now has 802853 members (and counting!) This group wasn't formed in quite a tragic fashion as the Amy Gillett Foundation and its message probably doesn't have quite the urgency regarding the prevention of cycling deaths as the AGF movement. Peopleforbikes approaches advocacy with a positive energy focused around making cycling open, accessible, safe and fun for everybody who wants to jump on a bike.

The power of a group like this is evident when you consider that since forming 15 years ago they have spent $30 million on projects to "make bicycling better" and "leveraged more than $654 million in federal, state, and private funding". Not bad for a cycling advocacy group. This is only the tip of the iceberg for what advocates like peopleforbikes contribute. To see more check out peopleforbikes.org.

Advocacy groups such as peopleforbikes and the AGF are there when you need them, but it's easy to forget they exist. They don't hassle you with membership emails, nor do they take up A4 pages in your favorite magazine... They operate behind the scenes on very limited funding. But they desperately need your support. The fuel for advocacy groups is generally their desire to do what is right, and to fight for fairness and open dialogues. It's up to you to show your support for their actions, and see what you can do for them!

Most advocates operate at grass roots level. There might be a trail building day, a fundraising BBQ to attend or a mass participation ride. These are your opportunities to get involved and show your face. After all, the trails and bike paths you ride on are partially there because of these committed people. A good way of getting in touch with your local advocacy group is to contact your local cycling club or bike shop. They themselves are likely supporters and might even be members. You'll also have the chance to meet new riders, and hear about upcoming trail development proposals!

So next time you happen to find a new trail, pick up a map on where to ride or are surprized by a bit of extra room on a bike path... spare a moment to think about this; How did it come about? No doubt there was an advocacy group in action, proverbially shoving stuff uphill to make it happen. Instead of just riding down the hill they conquered, maybe jump in and lend a hand next time. You'll also be doing yourself a favour with safer roads and more open trails to ride.