For the past few years I have been riding a hardtail 29er. I love the efficiency of the carbon frame 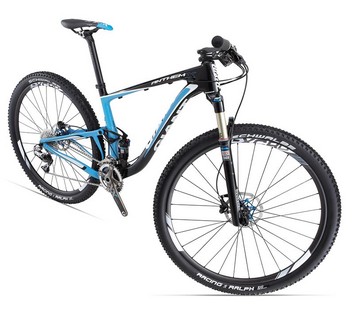 For the past few years I have been riding a hardtail 29er.  I love the efficiency of the carbon frame.  I built my race bike up with lightweight, yet reliable, components and have enjoyed the snappy, responsive feel of the race rocket I was riding.  Over the past year I’ve been hearing more and more about how great the new suspension systems have become.  I’m not a stranger to full suspension bikes, my first true race bike was a 26” Specialized S-Works Epic.  From that bike on, I had vowed never to ride a hardtail again, going through several full suspension bikes while avoiding the jump to the 29er.

When I finally decided it was time to make the move to the 29er, I test rode quite a few bikes, but found myself most comfortable on the hardtail.  From my perspective, the addition of the bigger wheels made up for the lack of suspension.  The weight penalty, and lack of a good platform, of the full suspension left me feeling that they just didn’t fit me and my riding style.

This year my team (Mafia Racing) made the switch to Giant as our bicycle sponsor.  Feeling that I needed to represent the brand supporting the team, I took a look at the Giant line of bikes. 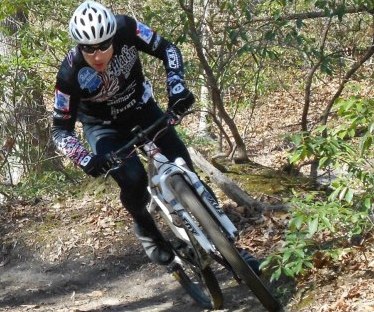 I took the time to test ride the Anthem X29er and felt that it was a very good bike, the platform was good and the weight wasn’t too bad for an aluminum bike.  I had heard there was a carbon version of this bike on the horizon, so I began doing some research on it.

The bike is the Giant Anthem X29 Advanced, and it is the top of the line full suspension xc and marathon race bike that Giant makes.  I know of people who have been waiting on this bike for months, so I was happy when I was able to secure my bike.  The bike that I ended up receiving was the Anthem X29 Advanced 1.  This model was essentially the new carbon frame, built up with the components from the Anthem X29 0.  The build consisted of Rockshox Sid RCT3 100mm fork and Monarch RT3 shock, X0/X9 components, Avid Elixir 9 brakes, Giant P-XC2 wheelset and Giant branded seatpost, stem and handlebars.

Out of the box I found the weight of the frame impressive.  The tubing on the bike is huge.  The bottom bracket area is enormous.  The frame was beautiful, but the build was not quite what I wanted.  First, I have to say, for this level of bike, the Giant P-XC2 wheelset is unacceptable.  The wheels, while bombproof, are over 2000 grams, putting them over the top heavy for an XC race bike.  (Note: the 0 model comes with Giant’s new carbon clincher wheelset)

From the stock bike that arrived, I switched a lot of the parts to make this bike more me!  The frame, fork and shock remained the heart of the bike, a solid selection to begin with.  I swapped the heavy stock hoops for my 2 sets of wheels, a race set of wheels, the American Classic Race 29er listed at 1419 grams, and a set of heavier training wheels, the Stan’s ZTR Crest wheelset listed at 1575 grams.  For stopping power, I swapped out the Avids for a set of Magura MT8’s.  Not only are they super light, they have amazing modulation and I have grown to absolutely love the feel of them.  For drivetrain I removed the X9 trigger shifters and replaced them with a single 10 speed X0 Gripshift, replaced the X9 front derailleur with an e*thirteen XC chain guide, and swapped out the spider and rings on the X0 crankset for a Homebrewed Components spiderless 32 tooth chainring.  For my comfort I put on my Selle San Marco Aspide FX Carbon saddle and mounted that to an Easton EC90 seatpost.  I also swapped out the 690 mm Giant brand riser bars for a set of Syntace Duraflite Carbon 600 mm bars.  The Giant grips also got replaced with a set of ESI Chunky Grips.  Finally, I added my personal pedal choice of Time Atac Titan Carbons.

So now that we have the bike built, and built the way I want it, let’s talk about the ride.  I’ve now been on the bike for about a month, and I’ve had it on a variety of trails in three different states.  I have logged enough time in the saddle to have a very good idea of how the bike handles. 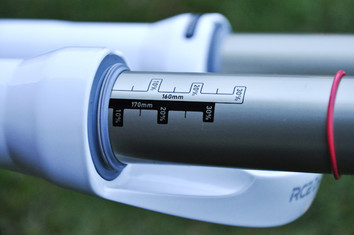 I started with setting the sag on both the fork and shock.  It took a little time to get the pressures set, but once I did, I recorded the pressures so that I could go back to those pressures before each ride.  Rockshox makes it pretty simple to get this right, by placing anodized sag markers on the stanchions of the fork and shock.  The easiest way I found to set the pressure was to pump it to a pressure I thought would work, sit on the bike, while holding a wall, and then slide the travel indicator (reddish rubber o-ring on stanchion) to the lower legs of the fork and the shock body on the shock.  Then carefully dismount the bike without causing an increase in sag.  By repeating this process over and over until you get the pressures right where they give you the optimum sag, you can find your perfect pressure setting.

Next I rode the bike around the neighborhood, just getting a feel for the different lever positions on both the Sid RCT3 and the Monarch RT3.  Each has a 3 position lever, the fork is 3 positions of the lockout, open, mid range and locked out.  The shock is open, mid range and pro pedal.  The shock doesn’t fully lock out.  The open position of each felt very plush, and I played around with riding off curbs, going over mounds and bunny hopping obstacles, really just playing around and seeing what I liked about the settings and getting a feel for what setting would work best for me.  I found that a combination of mid range on the fork and pro-pedal on the shock was what worked best for my style of riding, and offered the most responsiveness when hammering, without losing the ability to eat up the bumps.

After waiting out a few days of rainy weather and then waiting for the trails to dry, I finally got to unleash this bike in it’s natural habitat, dirt!  I went out to my local trails, which offer a great selection of fast flowy trails and some of the most technical terrain the state of Oklahoma has to offer.  I spent the first hour riding between a couple of trails and the parking lot, dialing in the fork, shock, saddle height, etc.  Then I really started to push the bike.  I had a lot of apprehension switching to the full suspension, particularly in regards to climbing.  Not only the additional weight on the climbs, but the loss of momentum due to the suspension.  What I experienced while on the trail was shocking.  I was climbing as fast, if not faster than I had on the hardtail.  What I lost in low weight, was gained in traction.  The rear suspension, while not bobbing under my force, was still active, responding to the changes in surface, providing me with traction like I hadn’t felt on the hardtail.  Keep in mind, I was running the same exact tire and wheel combination that I had on the hardtail, so rotational weight was identical, and it wasn’t due to a different tire combination.

I finished the climb and went to a flowy section of trail that twists and turns it’s way through the trees while descending; it’s a fast, fun section of trail.  I noticed right away that the bike settled into the turns and tracked really well.  I have to say that I believe the 15mm thru axle on the fork is what gave it such a great ability to track, simply point it and it was going where you pointed.  The bike felt very balanced, taking the time to set up the fork and shock and get them where I felt comfortable made the bike behave very predictably.    The recent rains had left the dirt tacky and the tires were biting beautifully, leaving me with a huge smile on my face as I railed the tight singletrack.

As I left that trail, the next trail I rode was a relatively flat, hardpack with random rocks type trail.  It was here I got to really put some power down and see how this bike accelerated. 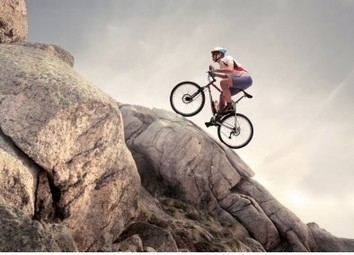 The stiffness of this bike was amazing.  Combine that with the suspension platform and when you think about accelerating, the bike has already accelerated!  Giant has been perfecting their suspension system over the previous decade and have developed their Maestro suspension, which I can attest to the success of their development.  It works when it should and supplies a firm platform for pedaling without the dreaded bob.

Finally I took the bike to the rough stuff.  Here it really showed me what I had been lacking on the hardtail.  Where I had to pick the best lines and fight my way through and over the rocks and technical terrain, the Anthem floated almost effortlessly over the same terrain.  I reached down and took the shock out of pro-pedal to the middle setting and the ride became noticeably smoother, while still maintaining the efficiency I wanted on the trail.  I was still riding the best lines, but those rocks, roots and other obstacles that were there were minimized by the suspension.  Instead of being bounced around, and working to maintain my momentum, the bike was taking the hits of those obstacles without impeding my forward progress.  When I got to the end of this trail, I felt fresher than I normally do, and I had held a faster average speed over that section.  There might be something to this full suspension stuff after all!

It’s now been almost a month and I’m even more in love with this bike than the day I first took it out on the trail.  As I have become more comfortable with it, it has allowed me to push it even further.  The addition of the rear suspension allows me to ride longer with less fatigue, because the body’s not taking as much punishment.  I have ridden it on very fast trails, and on old, rugged IMBA Epic trails, emerging from both still sold on the full suspension.  In almost all cases, I feel that I am faster on this bike than I was on the hardtail.  The only exception being, short track racing on smooth surfaces.  That type of effort is still best suited for the lightweight hardtail bike.

In summary, I am excited to be on the new bike.  I have seen many of my peers switching over to the full suspension and I have been a holdout, feeling that I couldn’t be nearly as fast on a heavy full suspension bike.  This bike has proven me wrong.  Not only is this bike light, it’s responsive, has a great suspension platform and outperforms the hardtail in almost every situation.  If you are in market for a full suspension race bike, I highly recommend taking a look Giant’s way.  Seek out a local dealer and take one of these for a test ride (make sure to set up the suspension first though).  I was surprised by the performance of this bike, and I am a full suspension convert once again!