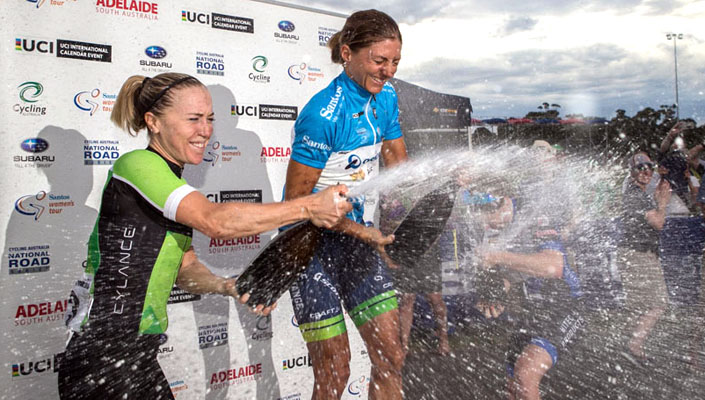 Run in conjunction with the Santos Tour Down Under, the women's version was dominated by Garfoot and the ruthlessly efficient ORICA-AIS outfit. Garfoot went into the final stage, a criterium around the inner-city Victoria Park in front of a huge vocal crowd, with a firm hold on the leader's jersey, but needed to keep her wits about her as her rivals set a cracking pace early in an effort to unnerve her. 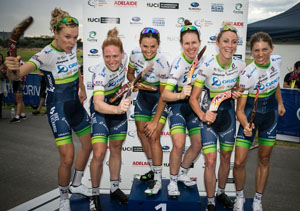 In the end it was High5 Dream Team's Kimberley Wells who stormed home to take the win ahead of local favourite South Australian Annette Edmondson, with Garfoot holding on for third, more than enough to consolidate her overall lead and take out the title.

Garfoot was quick to praise her ORICA-AIS team, who also took out the Teams Classification competition.

"We had to work so hard together in this final stage because I'm not much of a sprinter, so they had to get me to the right spot. I lost the wheel of Chloe McConville, but then Lizzie Williams jumped in and yelled "Me, me, me!" so I got on her wheel and she led me out perfectly," a breathless Garfoot said after the race.

It was a dominant and polished performance from ORICA-AIS, winning 3 of the 4 stages and coming third in another. 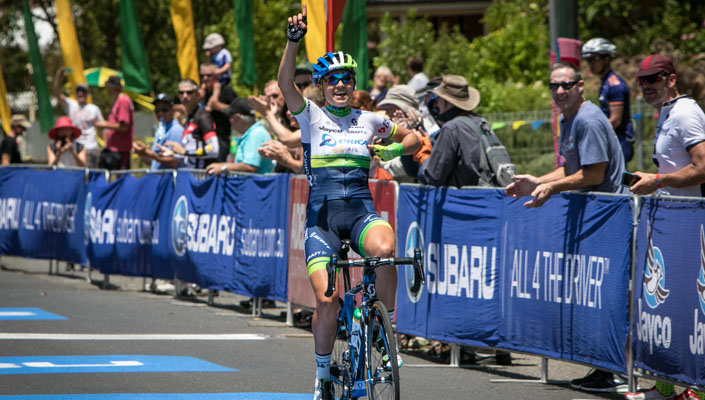 To cap off a wonderful 24 hours for the Australian pro outfit, Lizzie Williams joined her male Orica GreenEdge team mate Caleb Ewan atop the podium as she took out Stage 3 of the Santos Women's Tour.

In a race controlled by ORICA-AIS (the female incarnation of the team), Australian road race champion Amanda Spratt attacked with a marathon solo effort but was eventually hauled in by a group of seven riders who had decimated the peloton in blistering heat and savage crosswinds.

Williams, always aggressive, then attacked the bunch with four kilometres to go and managed to power to victory by a comfortable margin, with team mate Katrin Garfoot, the newly-crowned National Time Trial champion, sprinting into second place ahead of Lauren Kitchen (Hytec Products) to retain her overall lead.

“We knew that we had strong girls out there and that we could get numbers,” Williams said, moments after crossing the finish line. "Everyone was covering Katrin as she has the leader's jersey, so that gave me the opportunity to attack and slip away. That's teamwork - perfect teamwork!"

The Santos Women’s Tour wraps up tomorrow with a final stage criterium in Victoria Park.

Sit up and beg, step through town bikes for women have been around since before I was born. In the early days having a basket on the handlebars was more important than having a truly purposeful bike.

The change came when people started thinking about designing performance orientated custom bikes for women and their innate anatomical differences...