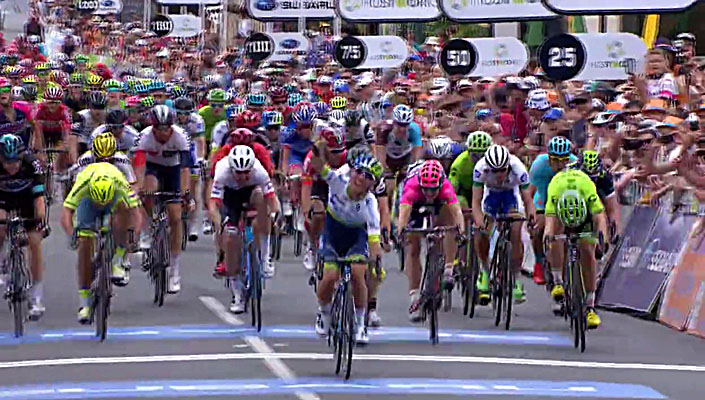 Caleb Ewan wins Hostworks Stage 1 of the 2016 Santos Tour Down Under
image: tourdownunder.com.au

Young sprint superstar Caleb Ewan has continued to make 2016 a stellar year by taking out Stage 1 of the Santos Tour Down Under.

By snatching this early victory, Ewan goes into Stage 2 tomorrow not only wearing the ochre Leader's Jersey, but also in possession of the IINet Sprinter's Jersey and the Cycle Instead Young Rider's Jersey as well.

His early-season form has not gone unnoticed by the pro teams from the US and Europe, and whilst he still growing into his role within his Orica GreenEdge team, many more seasoned riders are wary of his devastating finishing power.

Prior to the start of the stage, IAM Cycling's veteran road captain Matteo Pelucchi was quick to praise the young star. "He is quick, very quick, and he knows how to win. We would love to snatch the win, of course, but we have our eyes on Ewan today, watching him very closely."

In hot, blustery conditions, with huge clouds of dust blowing across the course, an early break was formed by UniSA's Sean Lake, Lotto NI- Jumbo's Martijn Keizer, and Ag2r La Mondiale's Alexis Gougeard - after only 12kms they had a 2min 30sec advantage over the main bunch. Then the well-oiled machine of Orica GreenEdge took control of the peloton, driving a controlled but relentless pace that saw the sprint specialist delivered to within 250m of the finish line in the driver's seat. As the lead-out train peeled off in perfectly disciplined formation, Ewan ignited his increasingly-familiar afterburners and streaked away for the win.

Ewan will definitely be a marked man heading into tomorrow's stage, a 132km journey from Unley, close to Adelaide's city centre, into the Adelaide Hills with a hilltop finish in the township of Stirling.