When I originally began working in a bike shop many years ago I faced the age old problem; how do I make it home on Thursday with my pay intact? Oh, the agony of desire, seeing all those shiny things and the manager's voice whispering in my ear "staff discount….wholesale deals…" Well, anyway, I set sail on course to purchase my first serious mountain bike.

This was the first time I had explored the world of hardtail vs. dual suspension and there would be many more meetings between these two apparently opposing philosophies. At the time my attitude could be summed up in the memory of a conversation I had with the sales rep of a large bicycle company and his statement "this new dually's 95% efficient when compared to a hardtail". My thought was "you mean I will lose 5% of the power I am pushing through the pedals?" The decision was made. 5% is, after all, 5%, so I bought the hardtail.

The funny thing is, (and this shows how overrated and unreliable thinking and weighing options is generally), that in my mission to buy a super efficient XC race bike I ended up with a steel hardtail! It was a beautiful bike. 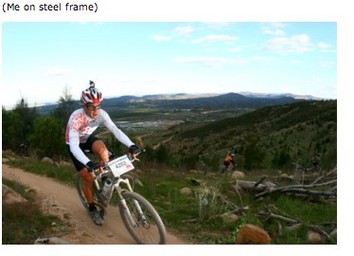 A Rocky Mountain Blizzard frame with the latest Shimano XTR wheels, brakes and drivetrain and Raceface cockpit components. The chromo frame may have added an extra kilogram compared to carbon or alloy, but it was 100% efficient and I was happy!

As the years rolled on I became wiser…it's true, I did, and I also bought a dual suspension bike.

A few days on from receiving the 120mm (5") travel carbon fibre dually, I arrived at a 6 hour endurance race with both bikes, my old hardtail and the new steed. As there was no chance to ride the new rig in the days leading up to the race, I started on a practice lap with the hardtail. Still with time to spare before the start I decided to also give the 120mm dually a burl….I never rode a hardtail again. I came 6th in the race on a dual suspension bike (a great result for me).

Clearly the issue for me was as follows: Early bikes with rear suspension were sniffed at by mountain bike purists and whippets because of a particular characteristic: pedalling induced bob. The pedalling action resulted in a repeated squat and rebound of the suspension system and became a problem especially when accelerating. The rear end 'squat' prevents 100% power to the rear wheel. The idea that my bike would squish while accelerating was anathema to me at the time!

These days many rear suspension systems feature technology to eliminate bob and squat. Modern air shocks feature 'platform damping' or 'pedal platform' technology, which inhibit the shock's activation up to a certain threshold. The pedalling forces operate beneath this threshold, but the suspension will activate upon encountering trail obstacles.

I was not seeing the whole picture when I bought my hardtail, probably too busy floating around in terms like 'efficiency' to be able to see the bigger picture (and please, I am not trying to sell a dual suspension over a hardtail. I would just like to share my experiences with you). The fact is, the dually may be 95% as efficient, but its what it does with the power that is advantageous.

While riding over rough surfaces a dual suspension system keeps both wheels in contact with the terrain at all times, resulting in maximum grip and therefore allowing high speeds to be attained and maintained. This has obvious benefits when going downhill: The dually hugs the ground even at speed, while a hardtail skips over and around. The benefits of suspension are also realised when hitting up technical climbs. The tyres keep contact with the ground, increase traction and importantly increase your ability to get all your leg power through to the rear wheel. I have also found this allows me to choose a lower gear and stay seated longer which is perfect when conserving energy in an endurance race. Only 95% efficient…so what!

It's not rocket science that a dual suspension bike is going to be more comfortable, particularly when riding endurance events, and its a great choice when you're pushing 40 like me. The old bones will thank you for it. 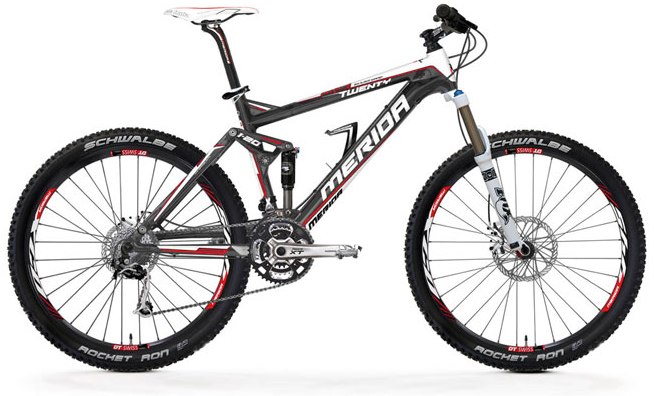 There is a huge range of dual suspension bikes out there. First up is the XC dually, which will have 100mm (4") travel and steep angles making it fast and snappy and a good choice for an efficient race bike (maybe I should have bought one of these!). From here are the trail and all-mountain models with 120-160mm (5-6") travel and more relaxed geometry. These bikes are good for all day trail riding and perhaps even endurance racing depending on the weight and component spec.

Any more travel than this and you are typically looking at freeriding and downhill (up to and beyond 200mm) which is another story in itself.

In saying all this I still believe the best place to start when mountain bike riding is on a hardtail. These bikes really teach you how to ride smoothly and help increase your basic skill level as there isn't a suspension system compensating for poor riding practices. It is also important to know that components like suspension forks, drivetrain and wheels will typically be of a higher grade than on a similarly priced dual suspension bike.

I never regretted buying a hardtail first before entering the world of dual suspension. My first serious bike taught me much about riding and getting a feel for the trail. I also love my 120mm bike. It is more forgiving and fun, yet still capable of racing. Bikes are all so good these days, you can't really go wrong.