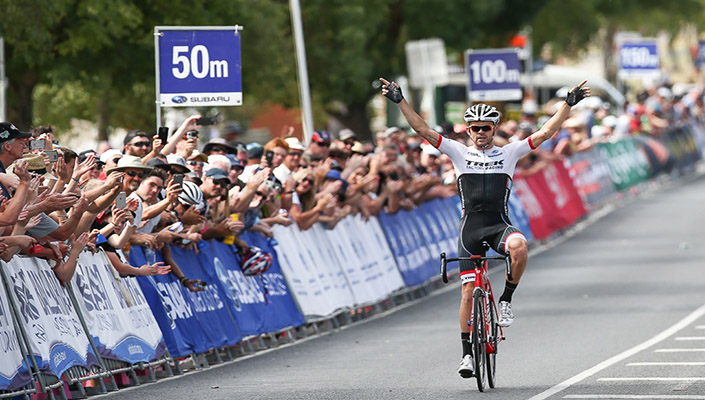 South Australian Jack Bobridge (Trek) has claimed a second Australian road race title in emphatic fashion, leading the race from start to finish at the 2016 MARS Cycling Australia Road National Championships. In a gruelling contest that saw only 15 of the 127 starters complete the race, Bobridge got away early as part of a strong 21-rider break that formed on the first of 18 laps of the 183.6km course

In what would prove to be the winning move, Bobridge and Bernie Sulzberger (Drapac Racing) attacked the breakaway group – within half a lap they had forged a 40-second lead over the group and were a full eight minutes clear of the main peloton. 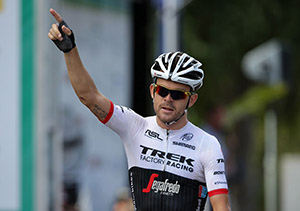 Not satisfied with a 50/50 chance of grabbing gold, Bobridge attacked again, dropping Sulzberger as they ascended the famous Mt. Buninyong for the 10th time – going into lap 11, the former world champion on the track had opened up a one-minute advantage over his breakaway partner, and from that moment until he crossed the finish line the South Australian was all alone.

"It was the greatest ride of my life,” an elated Bobridge said after claiming his second National road race crown. “An 80km solo effort is about as good as it gets.”

With pre-race favourite Caleb Ewan (Orica-GreenEdge), falling victim to both the furious pace and the hot conditions, abandoning the race after lap 10, the remaining Orica-GreenEdge team, along with Time Trial champion Rohan Dennis (BMC) and former criterium winner Cameron Meyer, went into damage control and worked together in an attempt to reel in the rampaging Bobridge. When it became clear he would not be caught, the chase group began attacking and counter-attacking each other, with Meyer and local rider Pat Lane managing to escape. Meyer eventually powered away to cross the line in second place, 4 min 40 sec behind Bobridge and a minute clear of Pat Lane. 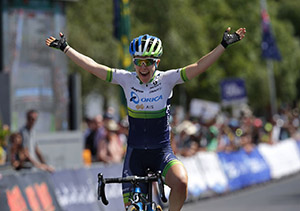 In the Women’s Elite Road Race, Amanda Spratt (NSW) of ORICA-AIS won in a thrilling sprint finish, claiming her second Australian road title ahead of 2010 champion Ruth Corset (QLD). Spratt, who also won the race in 2012, showed her speed and tactical superiority over the final 200m to get the jump on Total Rush's Corset to claim a second green and gold jersey.

In a desperate three-way sprint for bronze, Rachel Neylan (ORICA-AIS) showed her experience to climb on to the podium for the second year in a row.

The battle for the first ever under 23 women’s road race jersey played out in the main peloton with Jenelle Crooks (QLD) edging out newly-crowned criterium champion Jessica Mundy (SA) with Ellen Skerritt (QLD) rounding out the podium.

RELATED ARTICLE:
What is the difference between a road race and a grand fondo bike?

Road race? Grand Fondo? is there a difference...?

With all this road racing happening right now let BikeRoar help clarify a few of the main differences between... READ MORE

With the Australian nationals being on right now, things are heating up down under!

Here are some great tips on how to beat the heat during... READ MORE