Racing your first criterium can be quite an exciting landmark in your cycling whatever level you choose to ride at. Unlike road racing, criterium racing is actually quite adrenalin filled - right from the gun. This adrenalin is added to by the race unfolding in the space of an hour or less - no more second chances or 5 minute gaps. It's all happening, and happening fast! If you're not switched on and tactically aggressive it's easy to get left behind.

In a criterium this means the front of the bunch could lap you before you've even lost sight of the tail end of the main field. But take it easy turbo, we've got ten tips to turn your race around. Read on, and put yourself in the right place at the right time!

Criterium races are flat out from the start, so you won't have time to smash a gel mid ride. You shouldn't need to eat during rides under an hour, but make sure you're fuelled ready to go. Eat ahead of time as well, because you'll be hitting maximum heart rates within a few laps. Nobody wants breakfast twice.

Given the aggressive style of racing in a crit, it's important to have a well maintained machine. Not so much for you, but for those around you. It's not worth hitting full power when you exit a corner only to have your gears slip. In a criterium, this means you'll be on the ground and half the field will be joining you. Be fair to others, and maintain your bike. Nobody wants to get hurt... 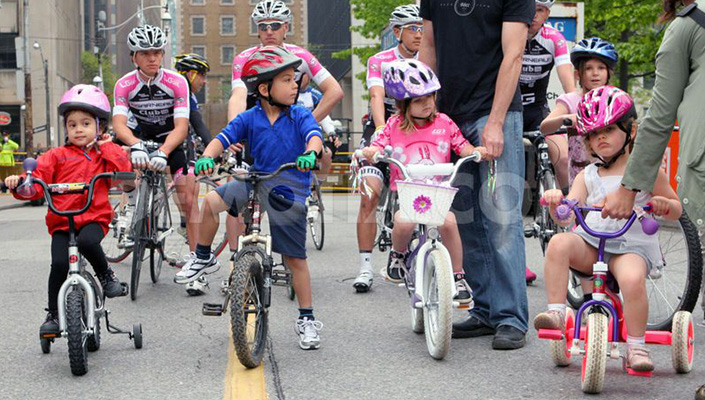 Check out the "eye of the tiger" on the far right. This is the focus required to ride a criterium successfully.
Photo: DEMOTIX

When it comes to starting the race, be clever. Criterium racing is as much about fitness as it is about brain power. It's always a good idea to start near the front, but respect those that are better riders than you. If you're new, sit one or two rows back. When the race starts, clip in and settle down. If there's an attack at the start, leave others to chase for you. In fact, let others do everything for the first few laps! Just settle down and wait. Yes, you might miss your chance, but you might also play a stronger hand come the finish.

By the midway point of a criterium race, you'll have two scenarios. Either there will be a successful breakaway group up the road and you'll all be chasing them down, or you'll all be in one big bunch and the winning move will be moments away. Get ready to go all out because something's about to happen. You could consider jumping onto someone else's wheel as they try to ride across to the leading group alone. Or you could wait for the actual breakaway to form by means of several riders attacking off the front. You must be mid field to front of field to be in the game for either of these scenarios. 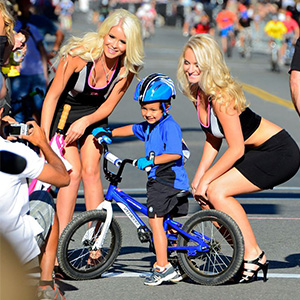 The winner takes the spoils!

Sometimes stupidity pays off, so don't shy away from launching your own attack at the most inopportune time. We're not saying bombing it into a corner and hoping for the best... but think outside the box. Maybe there's a hard hill in the circuit where everyone else attacks. Why not attack before the hill, 500m from the climb! Riders will hesitate, thinking "there's a hill coming" and when the hill does come, they'll be thinking "If I attack, everyone will join me because they want to catch the guy up the road". It's a win-win. This could be the 20 second gap you need!

In a criterium experienced riders know to avoid excess work. This could lead to an awkward situation whereby they refuse to work, and you just can't work anymore. Why slaughter yourself for their gain? If you happen to be in a small group or a breakaway, make sure everyone works equally by rolling turns on the front of the group. If there is a rider constantly forcing you to work more, or do all the work, then just stop pedaling. Roll back and let the bunch catch you.

TIP:  In point number 6, we say "let the bunch catch you" because you're doing all the work. If you can get off the front, slip slightly backwards off the rider who is on the front. Slip far back enough to avoid doing another turn... and when the time is right, attack with all your heart. If they don't chase, go for gold. If they do chase, then clearly they're capable of doing some work when they catch you. Be smart and sly, and always analyse the situation.

While you're actually in the race, learn how different corners spit you out of their exits. Some corners may warrant you creating your own riding line, to allow you to accelerate earlier or to keep more speed. Try standing up and accelerating from the final corner to see how it feels. You might find you end up fighting the camber of the road, or even riding through excess gravel on the tarmac. All the things that add up to you making the final corner count - the one corner that makes or breaks your race! 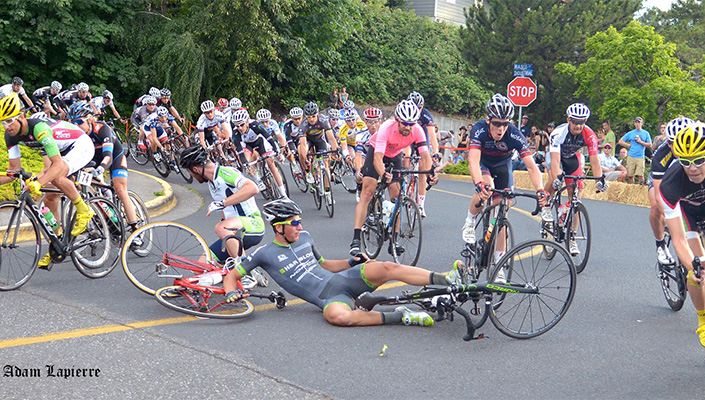 Every criterium circuit has it's little quirks. Find them, and use them to your advantage. For example, there might be a slightly bumpy section on the main straight. It'd be worth avoiding it in your final sprint! There might also be gravel on the road, also worth avoiding. Best of all, you might be able to find a smoother entry into a corner allowing you to maintain momentum and exert less effort in keeping up.

The bunch can become a little crammed in criterium racing - and once you throw in some consecutive corners, things can heat up pretty quickly. The best thing you can do is to maintain your 'personal space' when you race. Don't let other riders bully you out of position. If you're confident enough, just say something nice like "On your right!" or similar. It lets them know you're there, and if they continue to push you out the way, you both know they're being dirty.

However if space does run out, just accept you've been short changed! Ease up on the pedals, and let the rider take your spot. Learn from what they did to you so you can perform the same move to others when you want to move up in the bunch!

Criterium racing is aggressive in effort, but it should never be aggressive in confrontation. If a rider rides dangerously, or tries to intimidate you, avoid them for the rest of the race. Some people take things too seriously for their own good, especially when the racing gets exciting. Show others courtesy by allowing them to slip into a gap, with a simple "slot in bud" so they know you're looking out for them. Earning friends will help you in the future, as well as offer some new connections for training rides!

PRO TIP:  If you live too far from the race to ride there, you can set up your indoor trainer to warm up before your event. This is a good idea because the local roads will be closed for the race to take place, limiting the areas you can warm up in. The events will also be staggered by age groups or abilities, meaning there could be 30-60 minutes between when you register for the event, to when you actually start your race.

Happy racing, and remember to ride in a category that suits your abilities!