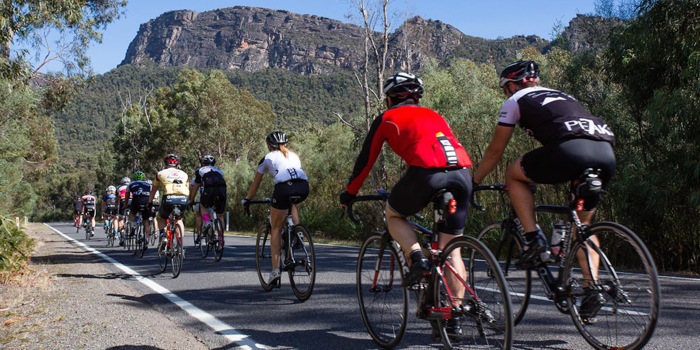 It doesn't just have to be in a race. Staying fresh on any long group ride is an important skill to master.
Photo: The Climbing Cyclist

Staying fresh on the bike can be quite a challenge, especially if you're at the point of pushing your own physical boundaries and perceived limitations. Not only do you have to contend with a higher constant power output, but you then also have to deal with crosswinds, headwinds, rolling turns and even a few attacks for good measure! Obviously this scenario represents more of a race than a weekend bunch ride, but the concept is there. Now how can you save as much energy as possible? Surely there are ways of increasing your efficiency and minimising the work involved with keeping up...

When riding behind another cyclist, you'll feel a huge reduction in the effect of any headwinds. Studies have shown that you can save up to 30% effort just by drafting off another cyclist. This doesn't mean you can just sit behind the biggest guy and wait until the final kilometres! But when you are sitting behind another cyclist, try to sit as close as possible. Ideally you'll be only half a meter off their back wheel. Whatever you do, DO NOT halfwheel the rider in front, because if they move sideways, they'll clip your front wheel and take you down faster than a cage fighter.

Rolling turns in a bunch are basically unavoidable. If you do miss rolling a few turns, it won't be long before you feel everyone else glaring at you, if not cursing you. Do your bit and roll a turn... If you can't continue the effort, sit at the back and call other riders through while you have a rest. Then get back into it! When rolling turns, the aim is to maintain one perfectly consistent speed. In other words, don't accelerate when it's your turn on the front. Keep it steady! When you pull off from having done a turn, gradually ease up on your power output. Don't brake, just slowly ease backwards as people slowly overtake you.

This is how we do it! No half wheeling sitting nice and close and keeping energy output regular.
Photo: Roues Chaudes Cycling Club

There are plenty of places to hide from the wind when riding in a large group. This next part is hard to achieve on public roads, but use your discretion. When riding, take note of where you think the wind is blowing from. Then look for markers to confirm your suspicions. If the wind is coming from your left, check for grass or trees (or flags etc etc) and see if these items confirm your analysis.

If the wind is coming from the left, and you're sitting directly behind another rider, you'll still be copping some wind! Try sitting to their right, diagonally behind them. This will greatly reduce the effect of the wind on you. Please note, this directly contradicts the "don't halfwheel another rider" we mentioned earlier on. This is an advanced skill, and usually saved for race day on fully closed roads. 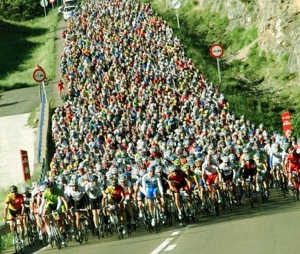 The oldest topic in cycling (almost). How fast to pedal? When you climb, you tend to spin more. When you hit the open road, nothing should change. When taking part in a longer road ride, and the pace is hitting some higher numbers, maintain a higher cadence. Try aiming for 95 rpm regardless of your speed. This is within the most efficient range of cadence figures, between 90 rpm and 105 rpm for most riders. You might be tempted to power along like a diesel engine, but soon you'll run out of puff. Aim for efficiency, and save the raw power for later - you'll need it!

When you are riding in a large group, you'll notice the shape of the bunch changes as you work your way back. As the pace increases, you'll see the front of the group maintain perfect form. Two riders usually side by side, maybe even wider depending on road closures during events. But as you work your way back, you start noticing gaps, riders riding single file and generally a total lack of order.

In a nutshell, avoid the back of the bunch! If you're too fatigued to move up, you are part of a group of riders who will soon be 'off the back' and limping home slowly. Sometimes it can't be avoided, but try sit within the first 20-30 riders, or in smaller groups, the top 10 riders. As the title suggests, avoid the tail of the bunch. It's twice the work just to keep up. Dig deep and move forwards, and then do anything you can to maintain your position. Except elbowing other riders, that's not cool.

So you've managed to survive the ride, and your group decides to go for a sprint. You get told there's a street sign which indicates the finish line, and you can't help but get a little excited! Start changing to a slightly harder gear, to anticipate your sudden acceleration as the pace increases.

Once the sprint actually starts, you'll see other riders standing as they pedal flat out. This is the 'wind up' phase as everyone begins their 95% effort, just before their final kick to the line. Keep up if you can, and tuck in behind someone else - then wait for others to start their final phase of the sprint. As soon as everyone seems to reach their maximum speed, swing out from behind your man, and go for gold! By saving your sprint for the very last moment, you're increasing your chances, and reducing the time required to be at full power (power which may not last as long as you hoped). This trick applies even more when sprinting into a headwind!

Happy riding, and use your discretion when trying any of the advice we offer. We can't predict the circumstances in which you ride, so just ride smart and follow the lead of what others are doing if you aren't entirely sure yourself.