How To: Quick and effective training around a busy work schedule 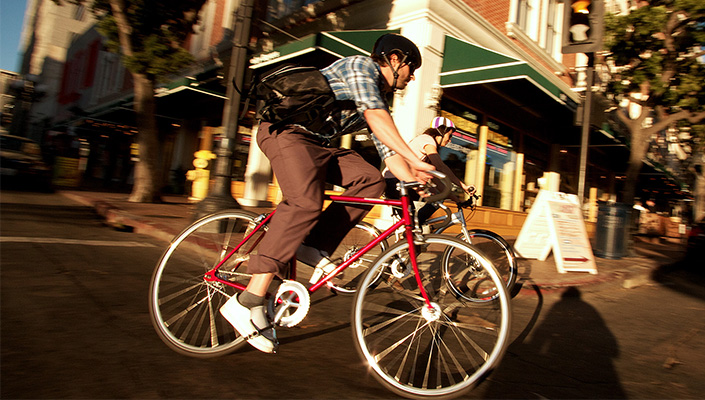 Or you could make your ride to work your training....
Photo: Performance Bike

Your boss forgot to send you the memo - he wants to overwork you. There goes your riding time.

We all work the "9 til 5 then 5 til 9" lifestyle, with bosses or managers having little regard for our cardiovascular goals this cycling season. Honestly, the boss couldn't give two hoots about your power to weight ratio either, or your climbing ability. What gives, huh?

"How was your weekend Frank?"

"I worked on my E2 heart rate zones, but apparently you don't give a hoot anyway".

“There are plenty of sneaky ways to train for those who are time poor.”

There are plenty of sneaky ways to train for those who are time poor. This lack of time might come from work, or even weather. You might need an indoor trainer, or an alarm clock loud enough to stir you at 4am, or just a clever training program...

If you're running low on time the best practice is to maximize the training time you do have access to. This means you should plan your week to include short and hard rides, regardless of whether they're indoors or not. If you can't ride often, ride hard.

Frank loves his cycling, but also loves keeping his job (and his wife). That's why he works the overtime. Although Frank remains employed his cycling buddies are whipping his butt on their weekend rides. Frank's cycling performances are suffering because he doesn't have the liberty of fitting in six half-arsed rides a week. But Frank can replace those six half-arsed rides with three high-intensity rides a week.

Before we hit the road, let's look at what training does to your body. The body responds to training through a process called 'adaptation'- all this means is your body gets used to being under certain types of stress. If you train for a very particular aspect of your sport, you're referring to 'specificity' as the concept.

If you overshoot the mark with regards to intensity, your body adapts to this extreme stress. It also coincidently becomes more capable of enduring the lower levels of stress, in between 'extreme stress' and 'low stress' activities. As an example, Frank might train to do 3minute efforts at 90% Max Heart Rate. His body will soon be capable of this effort, but it will also be capable of doing things Frank never actually trained for - so Frank's body can also manage a 2 hour road ride much better, even though he only ever did short efforts twice a week. In fact, Frank didn't ride more than 45 minutes at a time, all week. This is called the Trickle Down Effect, or as Frank calls it, his "dirty training secret".

Let's look at making a basic weekly program so that you can make one for yourself. Be sure to also read our previous articles to really learn the good stuff behind the training concepts.

For now, let's pretend Frank can only ride three times a week. One day before work and two other days after work. Why? Because Frank realizes the importance of sleep, especially in the interests of his fitness.

Make sure you understand terms such as 'strength training' because it's dangerous to do them incorrectly. We advise consulting a coach in person, to discuss these concepts. For now, use this program as a guide to helping you create your own.

This style of training is quite mentally demanding - let's face it, it's not really appetising to think of the prospect of slaughtering yourself after a day at work. Finding the motivation to do such intense rides can be very challenging for even the most motivated of cyclists. Keep this in mind, and learn the trick of riding for 5 minutes before making the decision to stop. At least you're on the bike!

If you want to sustain this style of training it's important to use rewards as motivation. You might choose to earn a week off if you train in this manner for two weeks. This will also allow your body to recover from the high intensity training. Most importantly, make sure you get out for a leisurely ride if you find the time. A relaxing 2 hour road ride one morning will do wonders for your motivation, as well as your fitness. It's a matter of finding the smallest windows of time, and making the most of them.