Spinning up some cadence!
Photo: www.urbanlimits.org

You may feel envious of the professional cyclists dancing up the hills, or even your Sunday ride whippets spinning the pedals like they don't have a chain. Sometimes they may seem light-years ahead in ability, but that's just because you don't know their secrets. One secret in particular - cadence.

Cadence is what you call your pedaling speed when you ride. The faster you pedal, the higher your cadence. Much like when you drive a car or ride a motorcycle; higher cadence allows faster response times in acceleration - in the same way engine revs affect your car performance. To put this example into perspective, think of what you'd do when you drive up a long steep hill. You'd gear down as you hear the engine labouring, to increase revs and subsequently increase torque and maintain speed.

When you're cycling, the same rule applies to your engine as with your car or motorcycle. You can increase your revs (cadence) to increase or maintain speed when riding uphill, or even on the flat. The only struggle you'll encounter is getting used to riding at such a high pedaling speed. Learning to pedal at high cadence consistently will take some time but you can train specifically for it. Eventually you will be able to incorporate a higher cadence into your everyday riding, and the results of your higher cadence will be amplified tenfold as you adapt to it. 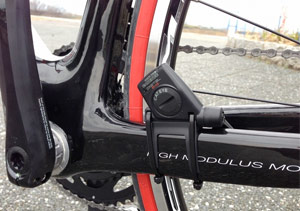 To start off with, you'll need a cadence meter (built into most midrange cycling computers). Most social cyclists sit on a cadence between 75-85rpm. They'll plod along at one tempo for hours, regardless of changing terrain. What we suggest you learn is increase your cadence to between 90-100rpm regardless how flat or hilly the route is.

Despite popular misconception, this won't make you slower - it will in fact make you faster in all areas, not just uphill. Try riding along at a cadence of 90rpm when on the flats and then increase this cadence (or just maintain it) when you hit a hill. This increase in cadence is NOT through pedaling faster in the same gear, it's through changing to an EASIER gear and therefore pedaling faster.

When pedaling at a slower rate, you tend to use far more muscular recruitment to pedal the bike. That means you're using more muscle strength to achieve the same result. Muscle strength does not last very long, so you'll be feeling the burn within the hour or less.

If you'd done 100 squats at the gym, you'd be lucky to walk to the car, let alone ride the next day! But during all of this, your cardio system goes on unscathed...

There is nothing saying "pushing hard gears is suicide", but the results and first-hand experience do show a higher cadence as being the most effective way of cycling on any terrain. We realise you're not the next superstar, so we can't expect you to sit at 120rpm on your favourite climb. If you feel more comfortable at a slightly lower cadence, then stick to it. However, it is worth trying to increase your cadence on any hills you encounter. Admittedly we all have different physical constraints, and pedaling like a pixie doesn't always suit larger or more muscular riders. But it's a skill that can be learnt, and implemented when needed.

TIP: Sometimes cyclists are limited in their cadence speed by the bike itself. If you are relatively new to road cycling or just a recreational rider looking to get more serious, it is a good idea to choose gearing appropriate to your abilities. If you are using a full size crankset (53/39t), think about replacing with a mid (52/36t), or compact (50/34t) - this will enable you to more easily adjust to higher pedaling speeds without suffering, struggling and generally having a crappy time of it! Also you could replace your cassette to one with a larger sprocket like a 27 or 28 tooth. This will give you an easier option for the hills.

To begin implementing a higher cadence into your riding, you're best starting off with some shorter extreme efforts, and also longer more modest efforts. By hitting cadence numbers beyond the norm, you're training your brain to fire signals in the patterns required for your muscles to contract far more rapidly. Then when you hit normal numbers, it doesn't seem as hard...

Try this as an example

Basically, have 10 minute blocks separated by 30 second extreme cadence efforts. Keep on going until you're unable to hit the extreme numbers for the full 30 seconds.

TIP:  Don't be in an overly easy gear, going nowhere. Drop 1 or 2 gears from what you'd normally be at, and then execute these exercises.

Once you've become used to these efforts, try always riding at 90-100rpm, and then increase your cadence on small rises and hills. Remember to control your cadence through gear choice, and not through increasing your physical input. Once you've got this nailed, you can then increase your physical input and subsequently pedal a faster cadence in a harder gear. This means you'll go substantially faster uphill, regardless of body weight.

Last of all; don't lose out on technique because you're so focused on pedaling speed. Cadence is as much about technique as it is about speed. Get them both right, and you'll change your riding for the better.