Bro, do you really need XTR? 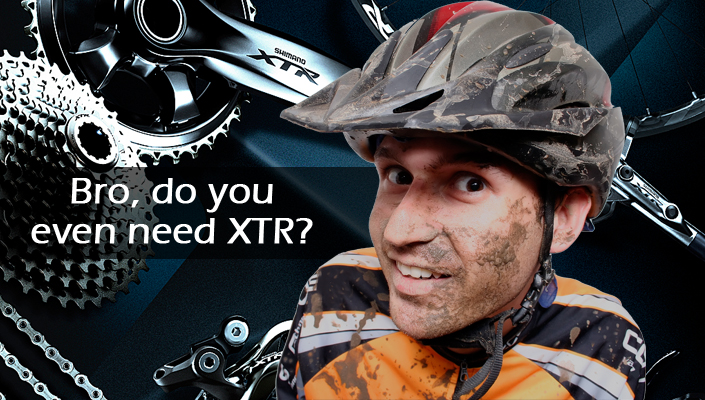 Do you really need Shimano XTR, or will something cheaper do?

With the recent addition of wireless electronic shifting and 1x12 MTB drivetrains from Shimano and SRAM, respectively, and with the rising costs of bikes, we just had to ask: Bro, do you really need XTR for your mountain bike?

Don’t get us wrong, XTR is a fantastic componentry kit and we would be stoked to have it on all our bikes. But what you want to know is if it is worth it for you, the average (or above average, but still paying for it) rider, to run top-tier, race-ready components on your bike?

For those of you who have pondered a bike with, or an upgrade to, Shimano XTR or SRAM XX1 Eagle, you quickly notice a trend in any research you do. Review sites and media outlets cannot argue with the improvement in quality and function of the top-tier drivetrain component grouppos, where both Shimano XTR and SRAM XX1 Eagle get top reviews and recommendations. This, however, contrasts with the user-based forums where the public states almost unanimously the opposite — you’re better to save your money and stick with XT than you are to upgrade to XTR. So, what do you do?

Why go XTR when XT is durable and cheaper?
image: Shimano on Facebook

The answer goes well beyond just XTR vs. XT (or XX1 Eagle vs. GX Eagle), as it is indicative of pure-performance and race-ready bicycle components. Before we give you our educated opinion, let’s take a look at the main differences between Shimano XT and XTR to unpack our ideology about running race-ready components.

I’ve said before that I want to be buried with a set of XT disc brakes as they’ve never let me down. The same can be said for the rest of the XT build kit as Shimano has kept the group reasonably affordable. XTR, on the other hand, can sometimes be more than double the cost of XT, so what gives? What makes XTR cost that much more than XT?

Without nitpicking over the details of each and every component, the differences between the two grouppos can easily be summarized as weight savings and dispensable feature shavings.

For most XTR components, you can expect extra machining done to parts to reduce their weights by mere grams. This can be seen in the brake calipers and shifters when compared to XT. The XTR 11-speed cassette features a mixture of steel, aluminum, and titanium cogs with a carbon spider, while XT just uses aluminum and steel. The rear derailleurs only differ in the use of a carbon cage on XTR and an aluminum one on XT. XTR pedals and cranks use titanium in some spots. There are no major design differences between XTR and XT as they utilize almost all of the same technology such as HOLLOWTECH and HOLLOWGLIDE.

After examining closely the differences between XT and XTR, I was still a little lost as to where the extra money between the grouppos goes, so I called Shimano customer service to ask. I spoke with a sales agent and asked the simple question: I’m a good rider that will occasionally race for fun, should I stick with XT or switch to XTR? The sales agent rambled off some irrelevant specs that I can already compare online, and would do more of the same as I would repeatedly ask: “OK, so XTR is lighter, but is it worth my money to upgrade? Or will XT do me just fine?”

The result of my anonymous call to Shimano yielded what the forums were thinking, as the sales agent affirmed that, “when buying XTR, you are buying the top tier name that goes along with the components."

So, should you buy XTR over XT? 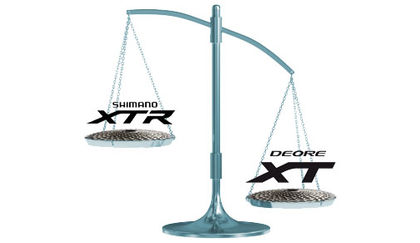 With the costs of the higher-end drivetrains surpassing $1000, your investment in a top-end drivetrain can be one of the bigger purchases for your bike. Combine this with a top-shelf set of brakes and you’re looking at spending a serious amount of cash! If you tally the grams between XTR and XT (which isn't easy, as Shimano has incomplete specs on their website), you see that, yes, there are some weight savings between the two grouppos. However, the cost is twice as much and there is valid concern that the extra weight savings in XTR comes at a trade-off to the lifespan of the product. For example, an XTR cassette uses some titanium cogs, which will not last as long as either the aluminum or the steel ones.

XTR is a premium component groupset with near-flawless performance, but so is XT, and for the average rider and weekend racer, the gains provided by XTR just aren't worth the extra costs. If you have money to spend, then bravo and by all means, purchase XTR — you will not regret it. If you are a serious racer who’s trying to make it to the top of the podium then yes, XTR is for you, too. Either way, crunch those numbers (weight and price) before you buy, as the money you save may be more usefully applied to saving weight elsewhere on your bike, like your wheels, or to help you upgrade your suspension, which will have a huge impact on the weight and performance of your bike.

We compare some fundamentals of mountain bike groupsets from Shimano and SRAM. What level do you need? READ MORE

RELATED ARTICLE:
Don't give up on your mountain bike!

Does a bad experience or crash have you feeling like quitting your MTB? Here's advice to help you address your issues and overcome the temptation to give up... READ MORE