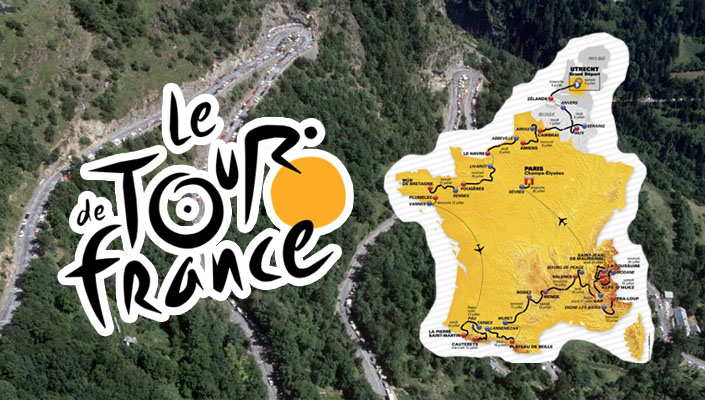 Some global sporting events are just so big, so all-encompassing, that they transcend sport itself and just become spectacles in their own right. The Tour de France is just such a spectacle: with its jaw-dropping scenery, enormous rabid crowds, and the best cycling in the world, the greatest of the Grand Tours has something for everyone.

This year, "Le Tour" begins in the Dutch city of Utrecht, and as it does every year, will finish on the Champs-Elysees in Paris 23 days later.

For those who have never witnessed the majesty and controlled chaos that is the TdF, it is contest of willpower, physical strength, endurance, and team tactics, clashing colours and giant egos, with a background of rugged mountains and lush valleys studded with 1,000 year-old castles... it's only a few days away and trust me, you don't want to miss it!

The field of competition begins with 198 racers - 22 selected teams each bringing 9 riders to the start line. For the first time in The Tour's history, an African registered team, MTN-Qhubeka p/b/ Samsung, will take part.

Each year the riders cover a different course, and this year the race organisers have thrown in a variety of challenges to test those who would vie for overall honours.

Racing kicks off with the 'Grand Départ' - the first stage from Utrecht on Saturday, July 4th, with a 13.8km individual Time Trial, which should effectively “seed” the riders for the 21 race days ahead, which include: 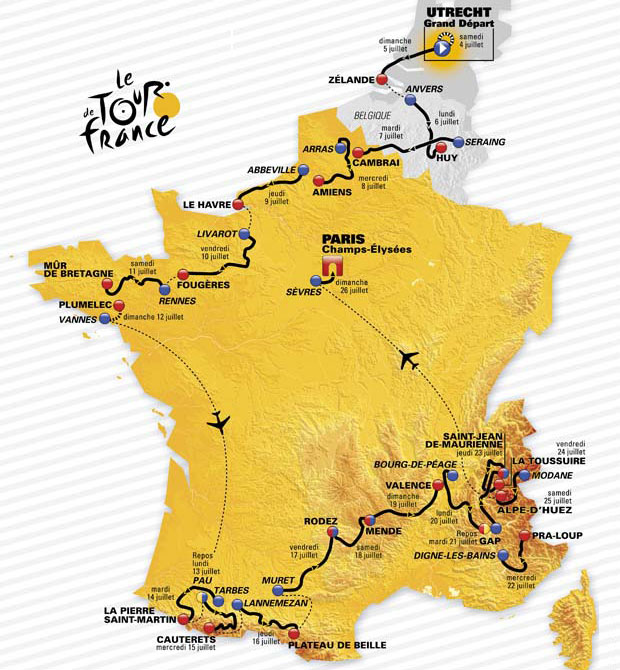 This Tour – the 102nd – will cover a total of 3,360 kilometres. Two stages are definite pre-race standouts: Stage 4 and Stage 20. The fourth day of the tour takes the peloton from Seraing to Cambrai, and features 7 different sections of cobblestones that will throw up plenty of dust, vibrations and violent collisions to delight spectators and put riders in harm's way.

Then on Stage 20 we return to the iconic L'Alpe D'Huez, where we will hopefully see the race decided as the final showdown for podium positions is played out on its rugged slopes and 21 hairpin bends.

The Tour de France has 4 jerseys on offer for the various competitions that take place within the race. The most prestigious jersey is the yellow jersey of the GC (General Classification) leader – the holder of the Yellow Jersey at the end of the race is the overall winner. The green jersey is the points classification sought after by sprinters and classics men. The polka dot jersey recognizes the rider who obtains the most mountain points, while the white jersey is a GC for riders under 26 years of age. 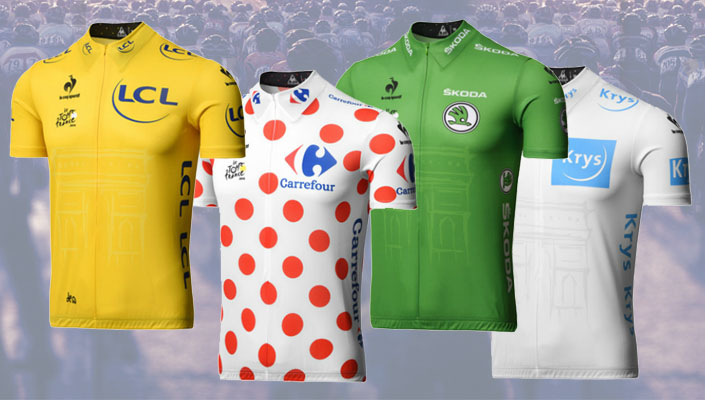 German Tony Martin is an early favorite for the Individual Time Trial to open up proceedings. The charismatic Peter Sagan, riding for Tinkoff-Saxo, will be trying to recapture the green Sprinter's jersey that he has taken the last three years. 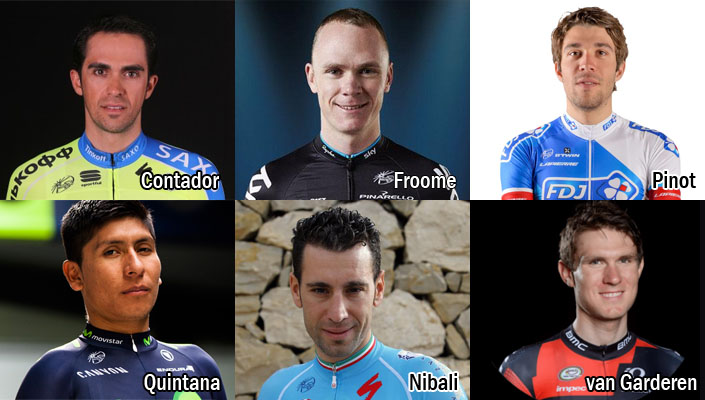 As for the ultra-prestigious yellow jersey of the General Classification, it seems unlikely that anyone other than the Big Four of Alberto Contador (Tinkoff-Saxo), Nairo Quintana (Movistar), Chris Froome (Team Sky), and last year's winner Vincenzo Nibali (Astana) will find their way onto the podium in Paris. All have won Grand Tours previously and, crashes notwithstanding, should have their respective teams busy keeping watch over one another for the first 2 weeks or so. But we at BikeRoar think it's also worth keeping an eye on young Frenchman Thibaut Pinot (FDJ) and American Tejay van Garderen (BMC Racing Team) – both young riders have displayed great form throughout the year thus far, and could be ready to step up to the big boys.

With the drug scandals that hounded the careers of Armstrong, Rasmussen, and Landis fading into memory, a brilliant and challenging course and a full contingent of powerful GC riders at the peak of their careers, the 2015 Tour de France is shaping up to be one of the most exciting ever.

We all watch the Tour de France in awe of what these athletes can achieve - day after day, week after week. The conversation around this incredible feat of endurance usually weaves between their intense training regime and their equipment. But what about their diet... READ MORE