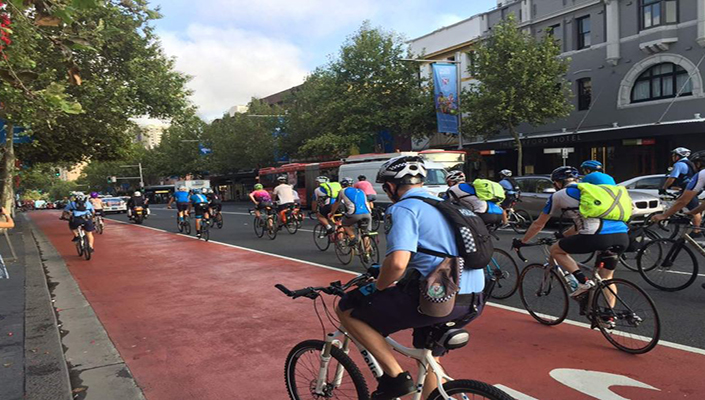 Protesters in Sydney took to the roadways to voice their unhappiness with proposed cycling laws.
image: abc.net.au

Due to an overwhelming backlash from bicycle lobby groups, the NSW government has stopped short - just - of imposing new laws that would require cyclists to carry a bike license and to register their bicycles. 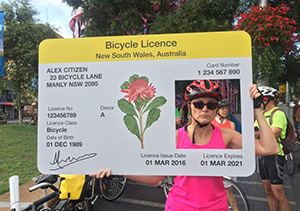 Instead, all adult cyclists in New South Wales (Australia's most populous State) will be required to carry photo identification. Fines will also increase 350 percent more for not wearing a helmet under new rules and penalties to be introduced in March.

This represents something of a backflip for the government of New South Wales, which has been under fire for its failure to provide safe cycling areas for the hundreds of thousands of bike commuters that flood into Sydney every day. Instead of working on legislature that increases cycling safety and promotes cycling, it has come up with severe new penalties for cyclists who break existing laws and those who do not carry photo ID.

Riding without a helmet now attracts a hefty $319 on-the-spot fine, running a red light and riding in a dangerous manner both incur a fine of $425 apiece, as does not stopping at a pedestrian crossing. A fine of $106 is the new penalty for failing to carry photo ID when riding.

Greens transport spokeswoman Dr. Mehreen Faruqi labeled the new penalties as "ridiculous," pointing out that the penalty for not wearing a helmet was double that imposed upon a motorist for deliberately driving in a designated bike lane. When contacted by BikeRoar, NSW Roads Minister Duncan Gay offered no comment regarding the new laws, but refused to rule out the possibility of compulsory bike licensing and registration being introduced in the near future. 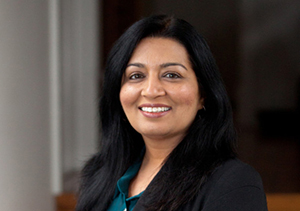 If they do come into effect, it will in all likelihood be a messy affair, and will definitely raise more questions than answers. How will it affect kids riding to school? Will they be forced to register their bikes and undergo license checks on their way to class? And what about low income earners? Is it fair that they have to hand over more of their hard-earned cash to pay license and registration fees for their bikes when, more often than not, they choose to ride because it's a cheap and reliable form of transport? Those cyclists that currently hold driver's licenses will rightfully claim that it's unfair to have to pay another fee to ride upon the roads that their taxes already pay for, and that their diver's license already covers them to ride on anyway.

RELATED: To saddle bag or not. Is this the best way to carry gear on my bike?

Most cyclists in Australia, and all over the Western world for that matter, are taxpaying motor vehicle drivers who already contribute financially to the building and upkeep of the transport infrastructure. They will no doubt argue that double-dipping is a dirty government money-grab and would, at very least, demand to see some evidence as to where the money is going and what it's being spent on. 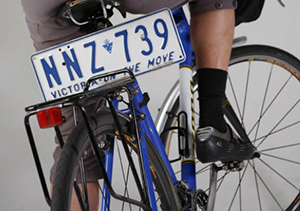 What the future could hold for NSW

These are reasonable points and together form a cohesive and compelling argument, but they still fail to address one more far less tangible concern. One of the reasons I love to ride and most people I know love to ride is that it gives us a few hours of freedom. If you're into Strava KOM collecting or just want your loved ones to know where you are, you'll probably have your phone with you, and most likely your Garmin or other GPS unit will have your whereabouts documented via satellite anyway. But if you want to go off the grid and just ride for a while, nobody can stop you - and nobody should have the right to.

The government should not have the power to dictate what is in your jersey pockets when you go out riding - that decision is yours alone, yet we at BikeRoar do acknowledge that the system is far from perfect. It is understandable that governments are looking to control the increasing amounts of cyclists in their cities and on their roadways. Cyclists should obey basic traffic laws and should have a vested interest in the safety of those around them.

With that being said, without there being the proper infrastructure in place to facilitate and support the demands of the bike populous, it may be a little early to be imposing such strict regulations. Cyclists are justified in their concerns of the increased fines proposed - where will this money go? And will it be used to increase the support for cycling infrastructure? Perhaps the government of New South Wales, and municipalities worldwide, should look at increasing their support of cycling communities before placing new regulations and imposing stricter laws, thereby reducing freedoms and decreasing bicycling participation.

RELATED ARTICLE:
What is the difference between a $60 and $300 cycling helmet?

Bike helmets price range can be all over the map, so what's the difference between a $60 and a $300 helmet anyways?

RELATED ARTICLE:
Fitting a Lid and the Law

Helmets are law in some countries and BikeRoar knows which ones

Take a look at this map that outlines...READ MORE