How to shift gears correctly on your bike

Learning to change gears smoothly is a key skill for every cyclist to master
Photo: Juliana Bikes / Santa Cruz Bikes

Riding with my family (who are recreational cyclists at best) inspired a revelation that a lot of people find bicycle gears confusing and are really quite unsure about how to operate them most effectively. Indeed, many of us think we have gear shifting down pat, but after years working in a bike shop I have seen even supposedly advanced level road cyclists make fundamental errors which typically results in them blaming the bike or derailleur setup for rubbing or clanking drivetrains.

A lot of mechanical issues with bicycles can come down to the way we ride, not the performance of the components, and with this in mind I think it's time we set out on a refresher course on gear shifting basics.

What are gears for?

Starting from the beginning, the gears on a bicycle are designed to make pedaling easier. For example: when riding up a hill and then pedaling in a high gear down the other side. Similar to a car, they allow you to start off in an easy gear and work your way up into cogs that become increasingly more difficult to turn for any length of time, but can result in greater speed.

What is the best gear to be in? 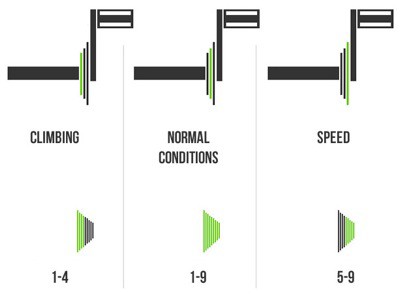 This is a simple, yet complicated question! For a new or recreational cyclist it is best to remain in a gear which allows you to turn the pedals at a rate of approx 90 revolutions per minute (rpm). This can be guessed (rotate more than once per second), or measured accurately using a bike computer with cadence functionality.

People new to cycling often use much higher gears than is necessary because it "feels" like it makes them go faster. It is often possible to maintain similar speeds using lower gears and a higher cadence - the benefit is that it's easier and less fatiguing. Pushing hard on big gears creates sore muscles and is not sustainable over a single ride let alone a few rides a week.

When climbing it is wise to use the lowest, most comfortable gear available for the same reasons as above. Your aerobic system can recover far more quickly than muscles burning up pushing a gear that is just a bit too high. The large front chain ring should be reserved for short periods of heavy work in a planned training routine, or alternatively for maintaining speed downhill, until you become familiar with your capacity and strength.

The importance of Chainline 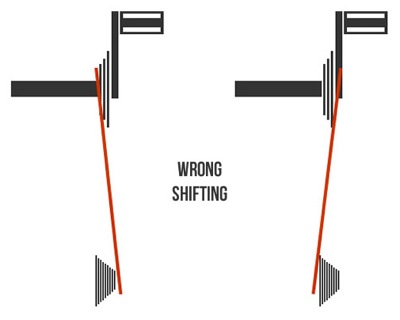 The red line indicates the chainline when running in the wrong combination of gears. This is what NOT to do!  Image: BikeAdvisor

The chain line is the line created by the position of your chain in the front and rear cogs. To have a smooth running bike it is necessary to keep the chain in as straight a line as possible from the front cogs to the rear. Not doing this probably won't break anything but will cause the chain to rub, crack and grind rather than purr!

In number 2 gear on the left shifter you should be able to use all the gears on the right shifter which is the rear cassette.

3 "best practice" tips for gear changing on a bicycle

1. Shift to a lower gear before you come to a stop

This is the same as you would in a car. A car will stall taking off in 4th and a bike will crackle and groan if you push too hard a gear from stationary. This is really important on a road bike which typically runs much higher gears than a recreational family bike.

There is no worse sound than that of a chain grinding and snapping through cogs. Good cycling technique involves learning to caress the chain between cogs and this means always pedaling when flicking the gear lever.

Similar to above, not only should you always be pedaling, it is also wise to ease up on the pedals (while still turning them of course) until the chain has completed its movement through the cogs. Shifting while pushing hard on a big gear is an advanced skill and comes with a lot of practice and familiarity with your bike and the gears themselves.

Still having issues? Ask questions in the comments below or pop into your local bike shop for some advice and fine tune your gear shifting skills!