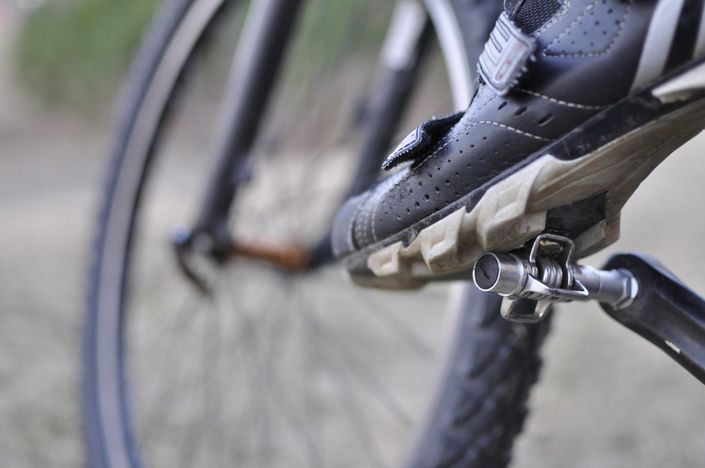 While driving along some time ago I approached a traffic light and noticed a middle age fellow on his road bike pulling up just ahead. He came to a stop — and then just fell over! It was a slow motion fall, like a tree going down in the woods... "Timber"... CRASH! 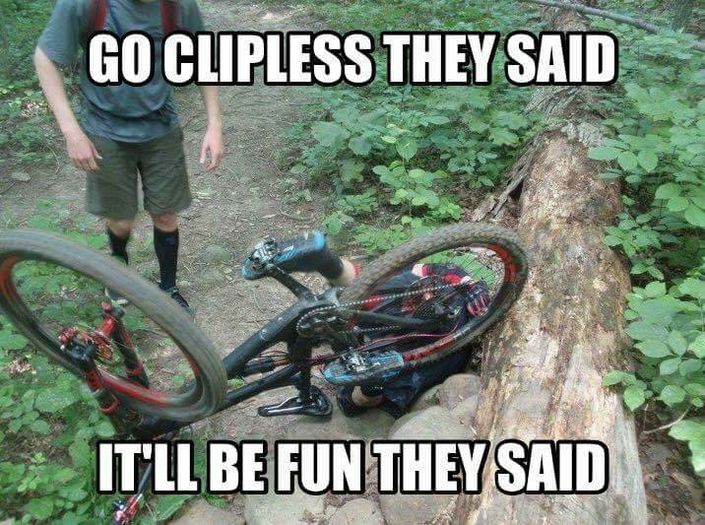 He was too far up the row of traffic for me to offer assistance, and he got up quickly anyway, although I would assume with some bark removed and a little embarrassment.

I knew exactly what had happened to precipitate the fall; this chap was trying out his new clipless pedals... and forgot.

It is an easy error to make. When I introduce people to "clipless" or perhaps more accurately these days "clip-in" pedals, I always suggest unclipping one foot early when approaching a stop, like for example, traffic lights. It trains your brain and quickly becomes routine. In spite of this, in the beginning twisting your foot to remove it from a pedal is as intuitive as Windows 8, but fortunately not as hopeless.

A note on terminology: "Clipless" refers to the absence of the older style toe clip and strap pedal types that were in use until the 80's. Instead, the clipless pedal uses a cleat which is attached to the bottom of a cycling shoe and a pedal body designed to engage with this cleat by simply pushing forward and down on the pedal.

Once engaged the shoe cleat can only be removed by twisting the heel outwards. It is possible to adjust the retention spring with a small allen key, or in some brands, by adjusting the cleat orientation. This changes the amount of oomph necessary to un-clip the shoe/cleat from the pedal.

So why bother? "A pair of trainers and a flat pedal is all I need, being attached to my bike just sounds dangerous". Sure, ordinary shoes and standard pedals will get you around fine, but if you want to get a little more serious and start clocking up decent miles, being clipped-in is the only way to go. 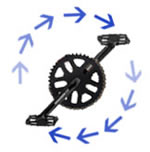 I have heard numbers like 30% more power or whatever, but what I love about being clipped in is the smooth pedal stroke that is attainable with a bit of practice. Some say it is because you can pull-up as well as push-down during the pedaling stroke that makes being clipped in a great advantage, which is sort of true, but I prefer to see it slightly differently.

Personally I find the most benefit is in learning to pedal in circles, where the pedaling action becomes greater than the sum of its parts. "Heel down, pedal around" is a handy adage to carry with you on a ride, and it keeps you mindful of the action. Don't worry too much about pulling up at the rear of the stroke; just try to keep the motion smooth and consistent.

In my mountain biking days it was described to me as: "Imagine you just stepped in dog poo and you're wiping it off the bottom of your shoe!". The motion of 'wiping' your shoe creates the sweeping around motion that is possible when clipped in and makes you pedal more smoothly. As BikeRoar contributor Fast Phil says: "like water flowing down a river".

Other benefits are having more control of your bike. This is particularly noticeable when mountain biking. It may sound dangerous, but being clipped in to a mountain bike is safer by far. You gain much more control of the bike in tricky situations, your feet won't come unstuck in the rough stuff and it is great being able to shift your body weight around while your feet are in the perfect position, locked-in and confident.

Similarly on a road bike, having the confidence to lay down the power without foot slippage allows you to get the best out of yourself, and feel great doing it, while on a big climb the ability to use leg power through every part of the pedal stroke is obviously a big advantage.

I once read in a cycling magazine a review of mountain bike clipless pedals (often called SPD's after Shimano Pedal Dynamics), which stated that in the aftermath of nuclear holocaust all that will remain are cockroaches and a set of SPD pedals. The point is that they are designed tough, and even with no maintenance will last for years. 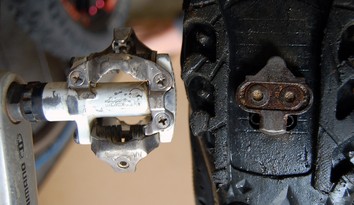 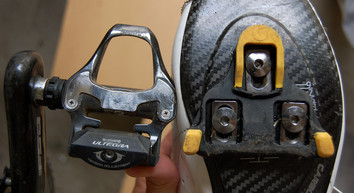 First and foremost, get the cleats fitted by a bikeshop professional. Incorrect placement can adversly affect knees and muscles. To avoid injury ask an expert.

Mountain bike cleats are recessed in the tread so it is possible to walk around in them as can happen when out on the trails. Road shoes have no place off road. The lack of tread and stiffness make them difficult to walk in at the best of times.

Pedals and cleats are sold together (as it is the cleat that engages with the pedal) and can be brand specific and not interchangeable. Any MTB cleat will screw into a mountain bike shoe and also some road shoes. Road cleats are compatible with road bike shoes only.

Many pedals come with some form of tension adjustment, meaning you can increase or decrease the firmness with which they grip the cleat. You won't want to change them out of the box, but do read the instructions to know how it's done so that once you get to trying your pedals out you can adjust to your needs.

Once you've decided on your setup it's time to ride!

You can start out leaning against a wall practicing clipping in and out and getting a feel for the motion. Do it several times, from both sides, to really get the hang of it. If it's to easy or too hard, try adjusting the tension.

The real learning begins by getting out there and, like my mate at the traffic lights, falling off a couple of times. It is interesting how quickly your brain becomes trained to the knowledge that twisting your heel outwards unlocks your foot from the pedal.

I've been riding for years and still have moments lying on a forest trail, underneath my bike, trying to twist my foot out of the pedal.

It's all good fun!

Editor's Note: This article was originally published Apr 11, 2013, and has been revised for images, links, editing, and accuracy.

RELATED ARTICLE:
Clipless vs. flat pedals and shoes for MTB

Rather than starting a war by defending one position or another, the team at BikeRoar had a close look at both sides of the argument... READ MORE