What to expect as a commuting cyclist - Part 1: The decision

A commute on bike to and from work instead of using a car or public transport sounds like an easy decision. A bike ride is one of the best ways of beginning and ending your work day - it can give time to wake up fully, reflect, exercise and at the end of the day, de-stress before making it home.

So it's a done deal, isn't it? Well...yes and no. While the decision might be easy to make, there are a number of factors that you should consider before making up your mind.

Here are a number of factors to consider before buying a bike and starting the rides to and from work.

Easy parking and riding past queued cars are going to feel great, but at the end of the day, your new means of transportation is likely to eat up more of your day than your old one. This is a factor to consider before deciding to bicycle to and from work. Sit down with an online map and figure out how long it is likely to take you to go back and forth. Try cycling the route once on the weekend and see what the watch tells you, but be aware that once you start cycling every day the time it takes will fall.

Another decision to make is whether you're going to be riding all year round. It's a question that will have an influence on what you should be considering when it comes to choosing a bike.

What about clothes and showers?

If you have a long commute, or like to push the tempo to combine commuting with training, then it's going to be essential for you to have a place where you can have a shower and change clothes.

Clothes can be kept at work or brought with you in a backpack, and luckily most work places have a shower on the premises. If yours doesn't, then your next options are nearby gyms or fitness clubs. These might offer shower-only memberships for bike or running commuters. No luck? Then you're on sponge baths in a regular bathroom. Baby wipes work like a charm, but this is far from ideal.

Of course, there is the option of riding very slowly, but most people get the need for speed once they've started cycling.

Another thing to consider is how long your commute is and what the roads are like.

If you have a long commute, then the ride is likely to leave you feeling a bit tired in the beginning. Be ready for 'the dip' that can come after a bike ride, and perhaps consider if you need to ride every day to start of with.

Roads help you decided what bike to go for - if it's all perfectly smooth asphalt, then a racer or touring bike can be a good option, but if it's like riding on a cheese grater you're going to be better off with a urban cruiser/mountain bike or a cross bike.

Keep it simple and reliable

Whatever you go for, make sure that you go for something that's as simple as possible. Everyday bikes are not supposed to be built like Christopher Froome's Tour de France bike, which, if it was a song, would be called 'Ode to Speed and Discomfort'. The point is that a race bike is built for speed, while a commuter bike is built for comfort.

Pro cyclists have mechanics and you have a mini-tool or tool box, so it's best to have a bike you can fix yourself.

What do you need apart from the bike?

When figuring out your budget, you need to consider that the bike on its own is not enough. A helmet is essential, as are lights, and if you're going for the longer commutes, then cycle clothes, a pack of tools and extra inner tubes should really be standard equipment for you to avoid stranding in the middle of nowhere and getting to work two hours late.

Another worthy investment if you're considering a road racer is good cycling shoes. 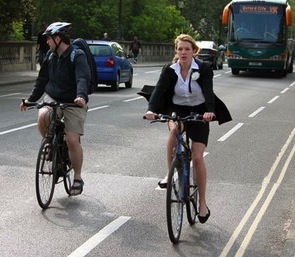 These hints should steer you clear of the most obvious bumps in the road on the way to an enjoyable cycling commute. However, there will be a range of factors that are special to the area where you live, including the levels and nature of traffic, the state of local roads, etc.

A great way of getting information about these things is by finding a seasoned bike commuter and asking them about what they wished that they'd considered before they decided to buy a bike and start cycling to work.