Exhausted all your local climbs and in need of a real challenge? Perhaps some of the most popular climbs in Australia will do nicely! Make a holiday of it; pack your bike and journey to the land Down Under!

Hopefully you'll be able to tackle at least one of these climbs, seeing as they're quite widespread across a vast continent. The climbs we chose aren't necessarily the hardest, but definitely have a significant attribute to them, historical or otherwise. So slam it into granny gear - it's climbing time! 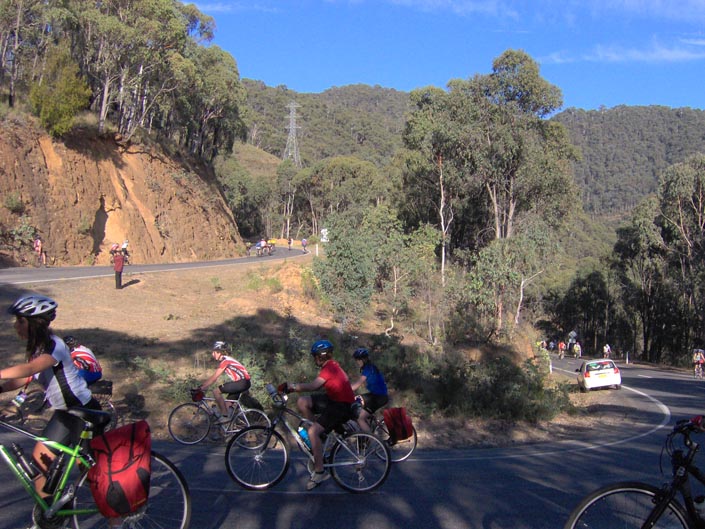 Tawonga Gap has two sides to it, with the more popular being the side of the climb closest to Bright, Victoria. The climb starts off quite gradually allowing you to warm into it at a steady pace. The gradient remains quite mild for the first 7km, before stepping up in difficulty considerably. One corner in particular has a reputation of breaking riders, spot-on the 10.8km mark. Having ridden 2km of substantially steeper tarmac, this corner hits a skyward 10% gradient in the space of a few metres. Ouch!

Riding up Tawonga Gap you'll be gifted with some stunning valley views from 8km onwards, coincidently when the climbing also becomes twistier and slightly steeper and more painful. So no matter how much you suffer, enjoy the view. It's half the reason you're doing this climb.

The Tawonga Gap climb has a special place in the hearts of many local and national level cyclists training for their year of racing - the climb itself also features in some events, with completion of the climb victory enough for all riders. Just remember this area is the Victorian Alps so check conditions in the southern winter months (May-August). 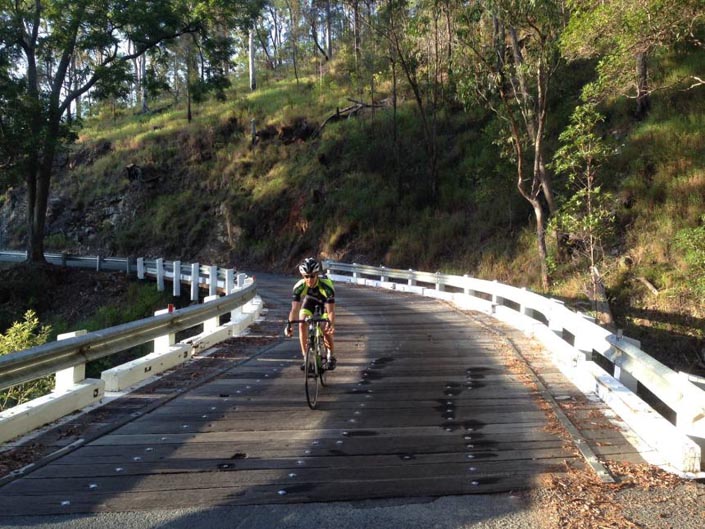 Located a short distance from the surf beaches of one of Australia's most popular tourist destinations, Springbrook is a small mountain top village on the edge of World Heritage listed rainforest. The climb itself begins not far from the edges of suburbia and climbs progressively from open eucalypt forest to dense rainforest in the 13km of constant ascent.

This is a truly beautiful road with a couple of one-way wooden bridges and a single lane section past a regularly flowing waterfall. 'To the top' usually means to the Fudge shop... not a bad destination after a solid workout! On the way, don't miss the lookout down the valley and across to the high rises of the Gold Coast and the Pacific Ocean beyond.

This climb is as hard as you make it with a gradient that allows you to sit back and enjoy. Recreational cyclists tackle it as a personal challenge, serious riders might put it in the dog and go for the KOM, or you can follow the BikeRoar editor and do it three times in a row! If you ever venture to Southeast Queensland, (this is the sub tropics so it is pretty much warm year round!), don't forget to bring a bike and enjoy some of the world's most beautiful cycling. 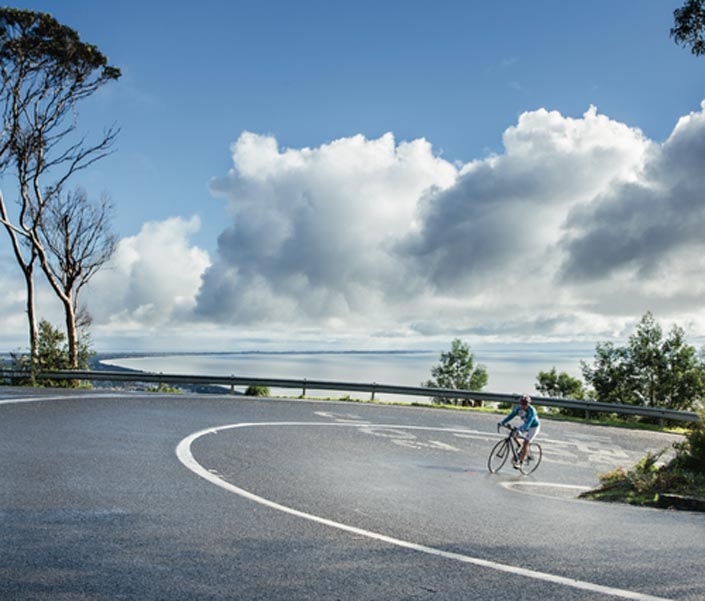 Arthurs Seat in Melbourne, Victoria. Not to be confused with Arthur's Seat in Edinburgh, Scotland.
image: melbournemag.tumblr.com

Arthur does actually have a huge seat at the top of this climb which is your reward for completion. Regardless of who Arthur was, he definitely had cyclists in mind! You might have seen riders ascending this climb during recent editions of the Herald Sun Tour, used by event organisers as the punctuation mark to an already hellish stage of racing. Victors atop this ruthless climb have usually been a part of an extremely select group of riders, and then continuing to attack in one of the remaining hairpin turns where gradients spike at upwards of 20% gradient. No kidding! In fact most of the climb hovers uncomfortably around 10% gradient.

The climbing starts after 200m of gradual uphill, with a right hand turn kicking straight into a cruisey 8% gradient. The climbing then continues one hairpin to the next, to the next... Keep away from the very inside of the corners, as they are far steeper than the centre of your lane. The climbing does not relent until about 600m to go, where the road finally relaxes it's angle of attack and allows you to gain some speed for the final left hander to the summit.

On a clear day, you'll have views over the entire Port Phillip Bay, to Melbourne Central Business District and surrounds. Definitely a favourite climb for the Aussies down under. 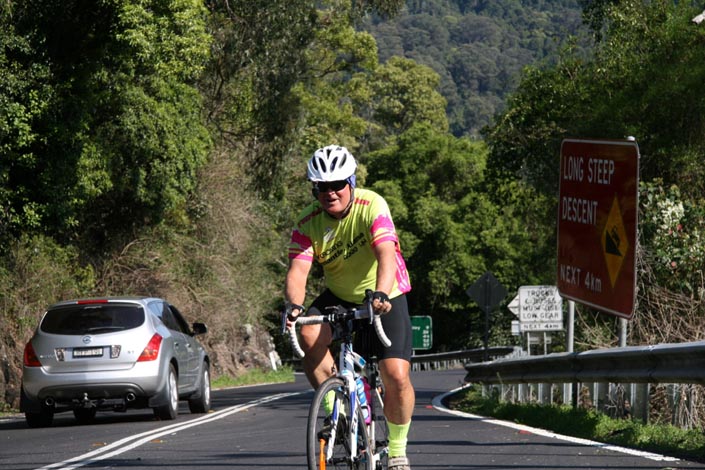 If you need some convincing to make your way to NSW, Australia, then just keep in mind that you might bump into Bradley McGee himself, former Tour De France rider and stage winner, and all round cycling legend. Brad spends most of his time in the town of Fiztroy Falls, a few clicks before the summit of this climb.

The climb itself is locally called Kangaroo Valley, but official records have it as Barrengarry Mountain. It's a cracking descent and an equally impressive climb. The ascent starts with a defined increase in gradient as you make your way to the first left hand kicker. From there, the surface smoothens and your rhythm settles down for what will be a steady rate of climbing. The road has no major spikes in it, however, the gradient does increase over an extended distance, further pushing your level of suffering, but gradually enough to catch you by surprise!

The climb then has some left and right switchbacks, letting you know you have around 2km remaining. The final few clicks are well worth it, as you accelerate over silky tarmac on the exit of hairpins, summit bound. There is a false flat to catch you off guard, but this is not the top! Keep pushing, for one last rise and a final pinch. 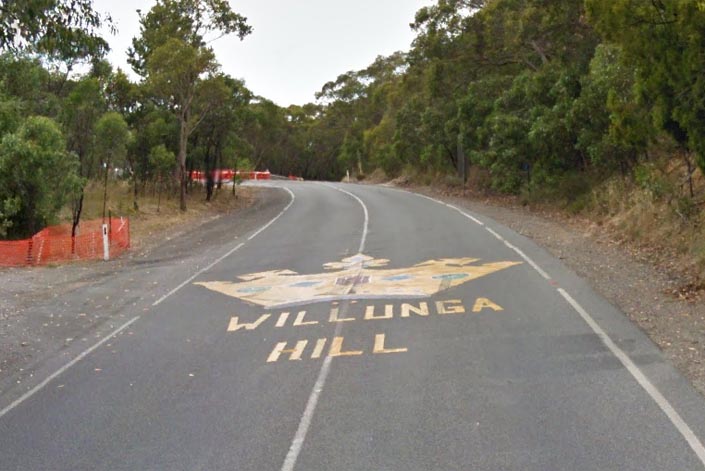 Ah yes, the Old Willunga Hill. Such an easy climb that they make the competitors in the Tour Down Under do it twice: Once for the final KOM points and again to determine the stage victor. A real pain in the butt for the sprinters, this climb thins the peloton down real fast! Attacks come fast and steady as climbers try remove the all-rounders from the equation in case it comes down to a sprint finish (which it has, numerous times... ) The fans line this hill similar to the climbs in the French Alps, with some camping 2-3 days in advance.

The climb itself, well it's nothing insane. But it's how the climb is ridden that makes it hurt. Top riders can nail this ascent in around 8 minutes, with the steady gradient allowing them to hold a steady power output to the summit. Some say the crest of the climb is the hardest as they give it a final boot for good measure! If you ever find yourself this side of the country, make sure you visit in time for the Tour Down Under as there's plenty of opportunity to ride with the Pro cyclists themselves after the race while they warm down. If you miss the TDU, you can pretend you're leading the charge, with plenty of road graffiti to egg you on!

So you reckon you're a climber? Hit these up and let us know how you go... If you're just not at that point in your fitness, make sure you check out our past articles on climbing, for plenty of tips and tricks to make your next climb a success.

Most people love cycling for the feeling of freedom it gives them. Soaring down a hill with nothing but a ribbon of tarmac in front of you - or even powering along passing others as if they're standing still. But then you hit a hill... READ MORE

RELATED ARTICLE:
How to become a better climber