Do cyclists ride in the middle of the road simply to annoy motorists? 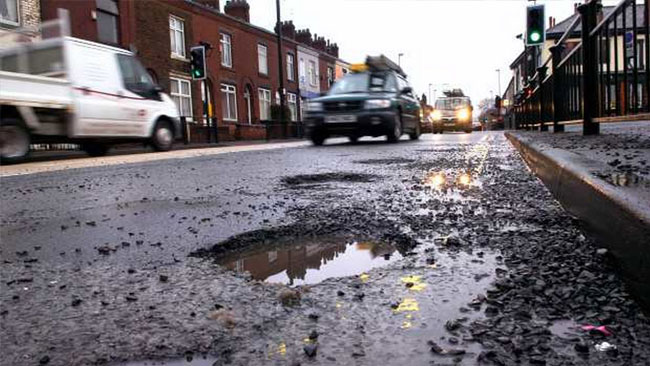 Let me start by pointing out the obvious: Cyclists DO block the road. It is also true that many motorists find this extremely frustrating, which has led, unfortunately, to terrible decisions being made and cyclists ending up injured or killed.

Do bike riders do this deliberately to put themselves in harm's way? I can vouch for most road cyclists that one of the main objectives when heading out on a bike is to arrive home firmly in the land of the living, not the realm of the dead.

One popular television journalist likened road cyclists to cockroaches, and we all know what happens to them! (the cockroaches, not the journalists). I implore every road user to ignore this foolish ignorance, but if you wonder, "if it is so important to stay alive, why do so many cyclists seem intent on blocking traffic by riding in the middle of the lane?", then read on... 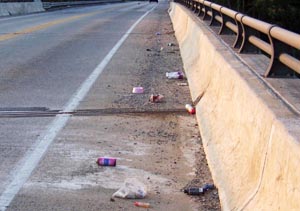 The first thing you learn as a road cyclist is to keep your eyes open for potholes, drains, crumbling shoulders, cracks, or anything that could spell trouble for someone riding on tires less than an inch wide.

Usually, these obstacles and road damage are located close to the gutter, where you also get the greatest build-up of glass and metal debris. Regular road cyclists get very good at spotting the dangers and have learnt to ride out from the shoulder to avoid these common hazards.

It is difficult to see many of these obstacles at driving speeds, but for a cyclist they are all too real.

There are also the deliberate obstacles. These are those pedestrian refuges, traffic islands and all manner of concrete highway furniture that councils fill up the road with. They are all potentially lethal hazards for a cyclist. If a cyclist swerves into the lane suddenly it may just be that they are attempting to avoid running into half a foot of immoveable concrete!

Avoiding obvious road debris, potholes, and man-made obstacles is reason enough, but there is also the general visibility factor. When I applied for my motorcycle licence I had to undergo a compulsory two day training course aimed at reducing the number of motorcyclist fatalities. One of the most important skills taught was how to ride visibly. The same rules apply for bicyclists.

It is foolish to weave around road obstacles in and out of the flow of traffic - it is, in my opinion, far safer to hold a consistent line within the flow and become predictable and visible, not being hidden behind cars. If the cyclists gets dark looks, abuse, or a honk from an impatient driver, it is better than getting an "Oh I didn't see you there" while they scrape you up of the bitumen.

This behaviour is noticeable when a cyclist is negotiating a roundabout. Timidity here can result in being run off the road on the exit of the turn. A confident cyclist will move out into the lane to prevent being overtaken while completing the maneuver or corner. This is called assertive positioning and is a crucial skill to master on the road. 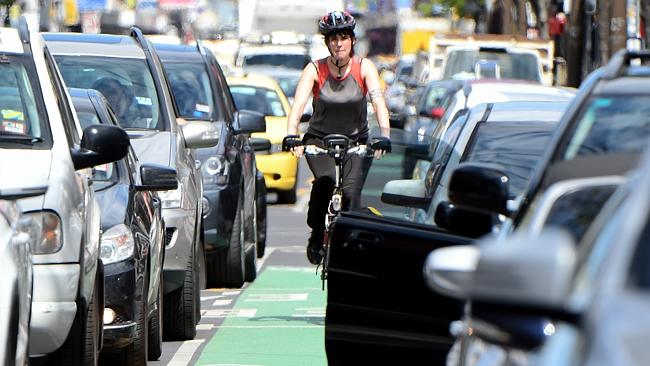 There was a fatality, recently, on a busy street in Melbourne, Australia, when a car door was opened in the path of a bike rider who ended up thrown off his bike and hit by a truck. Cyclists often take up a lane on city streets because of the danger of being "car doored". There is also danger when riding along roads with nose in parking; a car backing out has almost zero chance of seeing the cyclist in time. A bike rider with common sense will sit further out in the lane to, again, be more visible and allow for reaction time in these situations.

Pedestrians crossing or walking along the road are another obstacle to be avoided. Pedestrians have a habit of suddenly changing direction without looking or being aware of their environment. The silent nature of most bicycles and the inadequacy of ringing a bell or horn means you need to create some room for the unexpected.

Bunches form because of the efficiency of riding behind others, the social aspect, and basically because it can be a lot safer than riding alone. Bunches are visible, can be noisy, and offer safety in numbers.

Most sensible groups will only ever ride two abreast and do their best to allow the free passing of cars when possible. On narrow roads or those without a decent shoulder, they will form into single file to help the traffic flow and stay safe.

How should a driver approach a cyclist? 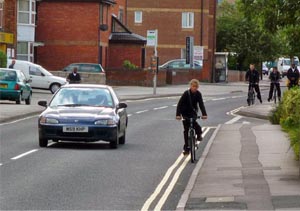 The best way to handle a situation with a cyclist is to remain patient. There will eventually be a wider section of lane where safe overtaking is possible. A friendly light tap on the horn can be useful if you think the cyclist isn't aware of your presence, but usually this is unnecessary. When passing, make certain you give the rider plenty of room and remember some bunches travel more quickly than you may realize, so be sure to allow for plenty of room when merging back into the lane.

Riding a bike on city streets can be hazardous and dangerous; there would be few regular cyclists who haven't had a near miss or know someone who has been hit by a vehicle. Cyclists are terribly vulnerable when put beside a ton of metal travelling at 35 MPH, and the truth is that I know of no driver being injured when colliding with a person riding a bike!

New laws are appearing which mandate a minimum distance for cars passing cyclists to prevent any further injury and death. Cyclists assert their position on the road not to annoy or for the sake of righteousness, but to simply stay alive.

There are idiots who ride bikes. There are also idiots who drive cars. But idiot or not, we all deserve the right to live through a bike ride and be treated with respect as humans, whether we hold up the traffic or not.

Following on from episode one, we will now be progressing to slightly more group orientated cycling. Yep, that's a fancy way of saying 'bunch riding'. The form of cycling that makes newcomers quiver in their cycling shoes. But fear not! It's easier, and way more fun than you think! Jump in, let's get started... READ MORE